Why? What on earth would lead you to believe that? Was it in your contract? Where did this expectation come from?

As a model one should expect to that BK (or any company for that matter) is paying you for your image so they can use it to sell stuff (in any way they please).

Is this model genuinely surprised that her sexuality was used in an ad campaign? Was she born yesterday? Has she never seen an ad campaign that uses sexual imagery before?

In the words of captain obvious:
“If you didn’t want your photo to be used in an ad, you shouldn’t have sold the rights to it.”

And yet nowhere in that article, or the one to which it links, does it say that she sold them in the first place.

I knew when the right wing nut jobs made corporations equal to humans, someone would come along and devolve human to human intercourse into crass commercialism. The term “being used” has a bad connotation simply because there are asshats out there willing to debase their fellow humans for a buck or two. True civility comes from being nice. I am glad that I don’t party with people like BK or colinInSpace because I think I would tend to “clock their goats” on a regular basis.

That’s my thought exactly. Why would you think they’d care in the least bit whether or not you knew how it was being used? it’s a corporation not a person with a sense of shame or morality.

It’s strongly implied. Otherwise she’d be ranting about the fact that they’re using her image with out her permission and she’d have all sorts of legal recourse.

Ok the link says she never gave permission. I’m guessing the photographer owned the rights to the photo and did give permission. Either she’s got a lawsuit (doesn’t sound like it) or she signed the rights away to some third party. I don’t know why she assumes who ever is using a photo is going to care about her thoughts on how it’s used though (especially a corporation).

Don’t mistake my grim awareness of the way advertising works, for an endorsement of those practices.

I’m not attempting to defend the ethics of corporate advertising practices. I agree that it would be nice if large companies companies did not resort to ‘crass commercialism’.

Especially if you are working as a model, this sort of thing the first, not the last thing you should expect. Modeling is a career that is basically synonymous with sexual imagery.

Perhaps modeling is not the best career for someone so concerned about how their image is used.

The details in the youtube link are quite murky as to how her image was appropriated by BK.

Either that is one heck of a lawsuit she could file for unlawful appropriation, or she sold the rights to someone and made some naive assumptions about what that could (and probably would) entail. 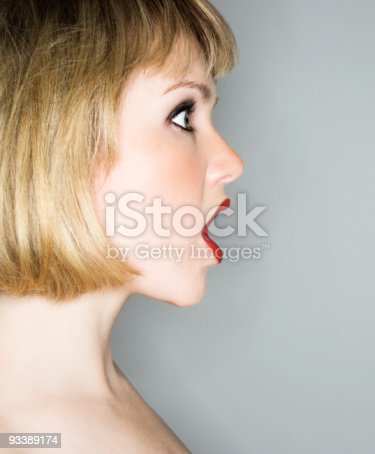 Profile portrait of young blonde caucasian woman who's mouth is open in shock.

here it is (istock watermark ironically placed)…for anyone to buy and use for whatever purpose they want. she sold the rights to the image. she has no right to complain about what it was/is used for.

Perhaps they picked the picture because of the brainless stare she has. Hence ‘mind blown’.
And being offended by the tired ‘woman eating a cylindrical food thing’ trope is a bit whiny. I’m sure the 13-25 year old male demographic that they are selling BK to, find it hilarious. People have been making the allusion since the invention of the sausage, it’s very highbrow nuanced humor :).

I agree with her that we should boycott BK. Not because of her, but because they sell shitty food that is unhealthy and makes you feel bad.

And in that pic she actually has a “iStock” in her mouth. That ‘ock’ is right in there.

Well, the ice creams aren’t bad and the burgers do a good and quite tasty job as an ersatz-food when on the go.

I figured it was a stock image (they typically are).
She’s just trying to make a buck off a company that used her pic. In this case, the company used what was legally available. It’s not their fault that she doesn’t “like” the content. I also hunted down this image from shutter stock by the same chick - she’s not going to be able to take this to court.

Yup, there’s a major problem with using a run-of-the mill stock image in a crass double-entendre, but any damages the model might have suffered were already done by this single-entendre. It’s okay that she did the shoot, and the ad campaign was typically exploitive and put together by terrible people, but no, this is not a good case. But, good cases and bad law/vicey vers.

While I can empathize with the model - when you put your image out there for stock photography use, you run the risk of it being used in an unflattering or crass way. Expecting someone to clear how your image is being used after you have already signed off on it being a stock photo is fantasy. The idea opens a whole can of worms.

What if the objection was something as simple, but valid, as the model was a vegan and wouldn’t want their image selling meat sandwiches (crass or not).

So, rather bad taste, juvenile humor from BK (and whomever their ad agency is), but unrealistic expectations on the model’s part.

Yep, I have no problem with her posing however she wants to - it’s her body. The problem I have is with her then trying to make a claim against a major corporation that they somehow sullied her image by using an unedited extant photo with a double entendre. They didn’t do worse to her than she did to herself, and by making that claim she made it harder for anyone else making a serious claim to be taken seriously.