Village designed as a home for forgetful seniors

Ah, but will each resident sport a handy button with a penny-farthing bicycle logo and their unit number ???

Me, I’m at Number Two. The Green Dome. Be Seeing You!!

Our safe, effective retrieval system ensures even the most confused or recalcitrant of villagers will always find their way home. 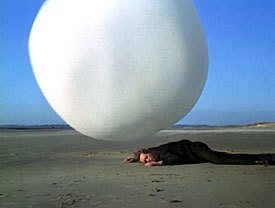 It’s quite incredible how pragmatic and thoughtful the Dutch are about so many aspects of life that other cultures botch so thoroughly. No one’s perfect, but in a lot of domains the Dutch make a damn solid run at it by recognizing just that and coming up with thoughtful solutions to our very lack of perfection, from our weakness for intoxicants to the mental decline of old age. Ironically getting them closer to the ideal than most of the rest of us.

Rover was the silliest effect ever and it still scares the piss out of me.

There’s a hint of Rover in the the drones in “Oblivion,” including the sound effects.

Agreed. I love this idea and I hope it works well for the residents. My only concern would be the long term effect of removing the elderly from the general population. Children especially benefit from interacting with and hearing the wisdom of the elderly as well as the reminder of what will become of us all.

Now where were we? Oh yeah: the important thing was I had an onion on my belt, which was the style at the time. They didn’t have white onions because of the war. The only thing you could get was those big yellow ones…

Note that such separate accommodations are meant for people suffering from dementia, not all elderly people.

I love hearing about potential solutions to problems that seemed ‘unsolvable’. It’s much better than hearing from nay-sayers, obstructionists, and those that are ‘part of the problem’. I really like this concept and think it has a lot of potential.

noted. Dementia comes in many forms. I’ve spent a good deal of time with sufferers and by and large, they are aware, articulate, and interesting. They may not know where they are or who you are or even what year it is, but they are still an interesting bunch and if you take the time, often very very funny.
I’m not trying to concern troll here. I just hope walling off dementia sufferers works out well for them.

Ideally, I would hope they stay with family but this sounds like a good option when that isn’t possible.

I’ve spent a good deal of time with sufferers and by and large, they are aware, articulate, and interesting.

I dunno, I’ve known a few who were cranky and mean and would expose themselves without warning. One bastard could ruin the whole village.

I didn’t think you were concern trolling, sorry if it came across that way. My impression of that village was that it was specifically for people who are easily disoriented and lost and need special full-time care, not for most elderly- or even very mild, high-functioning dementia cases who can still handle ‘normal life’ well.

Definitely better than the current option (hospice, hospital, etc). My grandfather died of alzheimer and even though he was in the best facility my mother/aunt could find once they could no longer ensure his safety and care, it still was a very depressing place. Many other residents were aggressive and very noisy which stressed-out my grandfather who was a quiet and withdrawn personality even in sickness. Since they were all in the same building, there was no escape from the atmosphere. A village sounds a lot less claustrophobic.

I would happily work there.

I’ve spent a good deal of time with sufferers and by and large, they are aware, articulate, and interesting. They may not know where they are or who you are or even what year it is, but they are still an interesting bunch and if you take the time, often very very funny.

My mother had dementia and she never lost her sense of humour. My dad loved that she would laugh at his jokes as if she was hearing them for the first time.

My father looked after her until her death last year. One of the few times he put her in respite care she left and started walking home. She was half way across the city before the staff found her. I think a place like this village would have made a world of difference to both of them in her final years (assuming they allow couples to stay together).

My mother’s mother had dementia too so I’m pretty sure I know what my future looks like. I hope they have something like this in Canada by the time I need it.