Walmarts are high-crime zone thanks to staff cuts, but America gets the bill

WallyWorld gets what it deserves.

Here’s the thing…it’s easy to make sweeping generalizations and gain clicks for anything anti-Walmart. After all they’re the cause of anything and everything wrong with retail and manufacturing in the US. But let’s go a little deeper past the sound bites here.

The article then attempts to make an argument using four Target stores for a comparison. While this might seem reasonable the article doesn’t say that three of the four Walmart Stores which are larger Super Centers, are open 24 hours with the fourth is open till midnight. The four smaller Target stores are open till 11PM and remain closed until 8AM. The Walmart stores then, in total, are operating 36 more hours per day, or the equivalent of having another 2.4 Target stores. It’s also important to note that the later hours are where typically a disproportionate number of violent crime occurs especially those where drugs or alcohol are a factor.

Finally the overall premise of the article is that Walmart should “do more” though the “do more” is never stated. Perhaps Walmart could, like Target, shut down at 11PM, but where would the law-abiding residents of Tula go in the middle of the night when awoken by a sick child? The article points out Greeters are a contributing factor. As a Walmart customer for many years I can’t image the typical Greeter, usually older and very friendly, doing much in a violent crime situation other than getting hurt if they try to intervene. Do we want Walmart of hire security guards? Have you seen the lawsuits that come from these in-house police forces? At a time where people are questioning our well trained and dedicated police forces around the nation do we really think Tulsa with it’s nation leading crime rate is the place to look to a nonprofessional police force to keep order? If any of us was the CEO of Walmart would you want the liability with so much crime in the area? I wouldn’t touch it!

There’s always more to these stories and more to these problems than given in articles like this and while I’m sure there is more Walmart could do, it’s not as simple or as damning as the narrative here. It was an opportunity to really look at the problems of Tulsa and what as a community and a police force, can be done. It’s unfortunate that article wasn’t written.

The linked article is super sad in a way that says more about society at large than Walmart in particular. The reasons the article gives for Walmart being a comparatively high-crime zone fall into 2 categories: 1.) Many features of Walmart make it appealing to lower income people (location, prices, hours). 2.) Stores need staff to babysit people, because so many will resort to criminal behavior if daddy isn’t watching (for a host of both sympathetic and unsympathetic reasons). For example, a mayor in the article says, “Walmart should be ashamed of itself once again for failing to control the people who enter their store.”

Overall, at least 200 violent crimes were committed at Walmart stores this year – one a day.

I really, really wish Walmart would hire more fucking people in their stores. Customers need actual help sometimes finding shit. I wonder if increased service would possibly increase sales and decreased theft? Probably not. That is why they are doing this.

Though I have to wonder, why is it their responsibility for what happens outside the stores? Though my local Walmart usually has a cop posted in front, and a security car cruise the lot, that walmart is kinds skeevy. The 2 other ones nearby don’t usually have that. I am thinking the neighborhood is just rougher. But if you put a store in a higher crime area, shit is going to happen. The alternative I guess is to not put a store there, and that is how you end up with food deserts and people unable to get meds cheaply and easily.

As bad as walmart is in some respects, when you’re truly poor, they make a lot of things more affordable than anywhere else.

[quote]removed greeters[/quote]I don’t think I ever considered that there might have been a correlation between the presence of greeters and lower crime rates. The very concept seemed to be primarily the butt of jokes, or at least vaguely creepy.

As bad as walmart is in some respects, when you’re truly poor, they make a lot of things more affordable than anywhere else.

I agree, but heroin makes you feel good, too. The affordability comes at a steep, steep price.

What, they got rid of greeters? That Was My Retirement Plan!!!

I agree, but heroin makes you feel good, too. The affordability comes at a steep, steep price.

I think comparing heroin to food and supplies needed for living is a bit disingenuous.

about WallyWorld, yes, because they are horrible, horrible examples of the far end of late state capitalism. and they cannibalize small towns.

during this period Tulsa’s

during the same period, most every small town with a WallyWorld

Finally the overall premise of the article is that Walmart should “do more” though the “do more” is never stated.

it has been. time and time again. and, the quick rando selection is… (in no particular order):

Of Course WalMart Destroys Retail Jobs: That's The Darn Point Of It All

I really must stop reading Daily Kos: it does my blood pressure no good at all. For example, here's a complaint that WalMart destroys retail jobs by opening a store in an area. Well, yes, of course it does, that's the whole point of this game we call...

PS: Posting the exact same content repeatedly doesn’t emphasize your point. If no one likes the point you’re trying to make, maybe reflect on the fact that your point is unpopular… and maybe for a reason?

You (and everyone else reading this thread, actually) should read this book - it’s a great distillation of the problems and the popularity of Wal-Mart, especially for lower class working women: 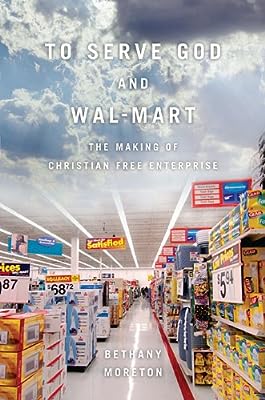 In the decades after World War II, evangelical Christianity nourished America’s devotion to free markets, free trade, and free enterprise. The history of Wal-Mart uncovers a complex network that unite ...

It was an opportunity to really look at the problems of Tulsa and what as a community and a police force, can be done. It’s unfortunate that article wasn’t written.

Yes, let’s not focus on poor old Wal-Mart. They never do much of anything wrong, amirite?

That you made an account just to post one lengthy message, twice, makes me wonder where else you’re defending Wal-Mart online. And how much they’re paying you to do it.

Part of my problem is I have some bias working for them for 5 years, but that was nearly 20 years ago, half the time in one of the smaller stores, and I think the way they do things now is different than back then.

At the same time I have read articles where their aggressive pricing has actually helped keep inflation in check.

How ever you feel about Wal-mart, I’d still recommend the book. Moreton does a great job of being critical of the company (especially concerning how they shape the economy) and showing sensitivity and empathy for those who are employed there and depend on the store’s prices. I promise it’s worth your time.

As for inflation, I just heard a piece on the radio yesterday about how inflation is higher at the lower end of the market (goods aimed at working class people) then at the higher end (I’d link to it, but I can’t find it).

I never shop at Walmart. When I had an RV, other RV folks thought I was nuts. So Walmart lets them overnight in their parking lots. They’re only doing it to save $$ on security.

I am just horrible about reading books, but Ill put it on my Amazon wish list, maybe get it from the library. And I am naive enough to ignore the bad walmart does. IMHO them and other companies are basically being subsidized by the government with the low wages, but I don’t want to argue that kettle of fish right now.

As for inflation, I just heard a piece on the radio yesterday about how inflation is higher at the lower end of the market (goods aimed at working class people) then at the higher end (I’d link to it, but I can’t find it).

That makes sense though, because the margins on consumer goods are generally way way lower than luxury goods. So they are more susceptible to changes due to say labor costs changing or material costs changing. Tampa Bay Walmarts get thousands of police calls. You paid the bill.

Walmart management insisted on pressing charges on the theft of a $.98 soda. It cost the tax payers about $1,230 for the arrest and detention.

Yep, they’re not the problem.