I’ve had dogs I dearly loved and would dearly love to have in my life again, but I think it was a collection of circumstances, including who I was at the time, that made them special to me. Besides I find it incredibly unlikely that a Dalmatian clone would come out with the same spots.

I guess certain variations such as liver instead of black spots would carry over though.

In the “have you considered adopting another $50 mutt and doing something useful with the change?” sense, this undeniably qualifies as grotesque excess as the poor starve in squalor and such; but aside from that(true of pretty much everything that costs money and isn’t necessary); this seems like a pretty harmless situation.

Cloning dead people ‘back to life’ would go all kinds of badly because of the interpersonal problems associated with everyone pressuring kiddo to be exactly what the ‘real’ one was; but I can’t imagine that there’s a good way to tell a dog that you are disappointed by its failure to be identical to the original, so that problem seems less likely; and a clone does have a pretty good shot at substantial phenotypic and behavioral similarity.

Also, cute dog. I’ll take a couple, if they have any left from the last batch.

(Edit: How did they resist the temptation to refer to two clones of a dog named Melvin as “The Melvins”? Just not into that sort of music or something?)

It doesn’t take a phd in epigenetics to see why trying to recreate a living thing is a fool’s errand: twins. Identical twins have the same DNA, and yet they aren’t the same biologically. If one develops a (non-infectious, polygenic) disease, it’s not guaranteed the other will too. So the one thing cloning has going for it–the DNA is the same–doesn’t guarantee identical biological results. Let’s not even get into personality or the importance of the environment.

A really good summary of the Dutch Hunger Winter and how a “short” famine permanently altered the epigenome of the gestating kids, altering their growth and incidence of metabolism-related diseases.

This isn’t even a new story. The American Life has a great story from 2005 about a cloned bull and how it did/n’t live up to its creators’ expectations. 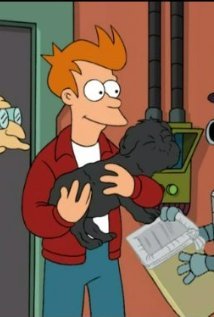 So the $1x10^5 is for the magma to power the cloning machine got it.

and a clone does have a pretty good shot at substantial phenotypic and behavioral similarity.

That seems like a reasonable hypothesis, especially when inbred mouse lines do seem to cluster behaviorally, but I don’t know if it’s been formally shown. These mice are supposed to be identical (they’re actually not, with some low level of heterozygocity), but you’ll see weirdos in almost every litter. It might be the product of spontaneous, de novo mutation (which would also be a factor in cloning a dog), but I’m not sure the inter-line variation of behavior is much larger than the intra-line variation.

From a practical standpoint, for $100,000 a person could foster a small army of pound puppies and find one that was a good replicate of their Precious.

Just reloaded the page and Wow! The price has really gone up.

I think i’d read of the term hyperclone or something along those lines. Which would be a perfect copy of a subject down to every last molecule, which is a highly improbable thing to consider because that’s the mental image most people have of a clone.

I wonder if a new word needs to used to make a distinction between these two concepts. Reusing existing genetic material to make a somewhat similar but new individual, and making a perfect genetic copy in every conceivable way.

I know that labs are clever, but this is freaking amazing - they don’t have opposable thumbs. Take THAT cats!

“Hyperclone” sounds f***ing badass, but let’s skip to ultraclone unless that’s reserved for quantum-entangled clones. In which case, why not just build your own pocket universe?

Far less creepy than puppy mills and the ubiquitous overbreeding of certain breeds. Also, the characteristics being selected for in many breeds are grotesque, like the shortened snouts of bulldog and pug breeds. Having another copy of your mutt is a bit maudlin, but if someone has the money and wants to pay it, no one is being harmed.

Aaaand now I’m seeing 00,000 again. I could swear it said “one hundred thousand” at one point.

Scads of unwanted pets are being euthanized waiting for good homes, yet these folks are so attached to their old dog they want to get a clone. Gad, go to the animal shelter and rescue some poor puppy. Perhaps s/he will surprise you with endearing characteristics your old dog never had.

That’s my exact same argument for avoiding breeders, whom I prefer to call “amateur genetic engineers.” Ever heard of the Munchkin cat? Cat with really short legs. You have to breed a normal cat with a Munchkin, because if you breed two Munchkins together, the kittens aren’t viable. Gee, maybe that means there’s something genetically wrong here . . .

Scads of unwanted pets are being euthanized waiting for good homes

Not really - “euthanized” implies that the animals are suffering as a result of not being pets. It isn’t hard to think of arguments to the contrary. I prefer to simply call it “murder”.

I remember that story. Shades of Pet Sematary there.

Haven’t there previously been stories of laboratories that could supposedly clone a beloved pet, wherein the stories did not stand up to later scrutiny?

It wouldn’t be too difficult to track down dogs that look sufficiently similar to the departed and supply some fake documentation regarding their genome, I would think.

That’s exactly what I thought when I heard it.