The best part is what happens to the twit taunting the bullfrog at the end.

While I think mammals understand the idea of play and enjoy it (my cat will bring the laser pointer over to me in her mouth), I’m not sure the mantis or the frog really understand they are playing a game – they probably think, to the level they do think, that somehow they just aren’t catching the tasty prey they see.

I agree. Even with cats, it’s a good idea to have something they sink their claws into periodically during laser play, or it just frustrates their hunting instincts. I always make sure I have some good toys that I can land the laser on so they get some physical stimulation.

Not sure if mantises think, but this summer I found one of them gripping a plant by its back legs, hanging down, trying to look like just another wilted leaf as it waited for bees to go by. So they can adapt their camouflage by some internal process.

And I’m not sure if in their attacks that they’re adaptable or just relentlessly indiscriminate? They’re mostly not native to NAmerica but eat all kinds of NA bugs (including the nonnative honeybee as well as native bees), and then too they eat hummingbird brains: 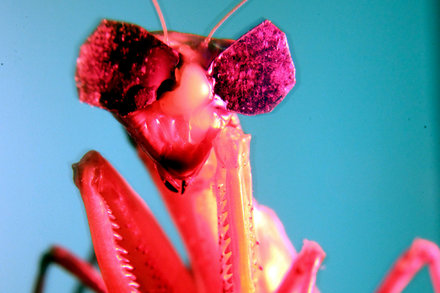 Scientists have developed a healthy respect for mantises, acrobatic hunters with 3-D vision and voracious appetites.

Notice the mantis only hit the glass once. After that, it seems like he knew he wasn’t getting that spider. Smart mantis!

I think the mantis was trolling the guy making the video and that frog was going to get something to eat come hell or high water. Quit teasing your frog and feed him! He’s hungry already!