WATCH: An extremely dumbed down history of getting ripped off

Wow, you weren’t kidding about the dumbed down.

I only object to the notion that the people doing the ripping off are smart. The idea that rich = smart is a tired and untrue. The most recent financial collapse pretty much showed the people who run banks are about as smart as coin flips.

Sure, charismatic con artists are probably often very smart, but making millions in shady finance is just a function of being wealthy and well connected in the first place.

Well it’s not like poor = idiot either. The video just relies on exaggerations in the process of making their point.

Drop in “1 percenters and 99 percenters” or “haves and have nots” in its place and it would make just as much sense. But since the video series is based on educating “idiots,” well that wouldn’t fit in with the theme.

The most recent financial collapse pretty much showed the people who run banks are about as smart as coin flips.

I’m not sure having smarter people making decisions in banks would have made much difference, in fact a lot of the people involved in coming up with trading strategies and risk modelling are some of the smartest people around. The problem is that even the smartest people on the planet are ill equipped to deal with the level of complexity and uncertainty of modern ecconomics.

But do they play the lottery?

The most recent financial collapse pretty much showed the people who run banks are about as smart as coin flips.

Their decisions are as smart as coin flips. But the banksters themselves are otherwise pretty smart - they can run the world economy into the ground, but they won’t get poorer in the process.

If smart means that they act in their own best self interest effectively.then greedy bastards will always think theyre smart, people looking at the bigger picture will think they’re dumb and everybody elses’s opinion will be split depending on whatever power fantasies they do or do not have.

The problem is that even the smartest people on the planet are ill equipped to deal with the level of complexity and uncertainty of modern ecconomics.

And therefore not dumb, but very irresponsible.I don’t know how smart that makes them in the end.

I’d go for something roughly along the lines of “ability to leverage causal relations to achieve a goal”. (Not accurate, could be better, doesn’t cover cases when the person is aware of the relations but for any reason does not act. I am too tired now to nitpick.)

It’s then on the subject itself if narrow self-interest or a wider context is included in the goal specification.

“ability to leverage causal relations to achieve a goal”

If a persons goal is to get as fast as possible from point A to point B through heavy traffic, and is able to do it by running every red light, ignoring every traffic law on the books, cutting others off and and does all this without getting herself or others killed. Can I call that person smart, lucky or a jackass?

What if it was done because of a medical emergency?

If utility is the benchmark, then smarts are just a tool, and any positive associations with the word is unfortunate, like associating beauty with other positive traits.
But even if that’s not the case, if your goals are dumb and you’re oblivious to this, then how smart are you?

I’d rather say that smart means making informed mistakes and learning from them. Which is what bothered me about the video, (getting back on topic before the dragon comes around looking for a midnight snack), and its how it says people are dumb for allowing smart people to rip them off. Isn’t it then basically saying that power = smarts?
If its true, then dumb people deserve to get ripped off, for enabling sociopaths by taking out loans.

Just read what I wrote. I may be too tired to make sense, its hard to tell anymore.

Edit:
If there’s any reason why I would ever dare to call myself smart is because I don’t make the same mistake more than 6 times.

“The uploaded has not made this video available in your country.”

Well, he sure showed me!

I’ve never quite understood why some people are so against the lottery.

Some people (most people?) play the lottery because they find it fun to play the game of dreaming what they would do if they win. Not because they expect to win.

Seriously, the only female figure in here is the nude headless body popping out a baby? Women are people, both smart and idiotic, who usually wear clothes, and often work in banks and advertising, gamble in casinos, and otherwise use money too. Why is that so hard for some other people to grasp?

I’m not sure having smarter people making decisions in banks would have made much difference, in fact a lot of the people involved in coming up with trading strategies and risk modelling are some of the smartest people around.

Well, I’m not sure what “smartest people around” means. I mean, built very complex models and got everything wrong… sure, that happens to smart people, but what is the evidence that they are smart?

Their decisions are as smart as coin flips. But the banksters themselves are otherwise pretty smart - they can run the world economy into the ground, but they won’t get poorer in the process.

Anyone who was complicit in the financial collapse who wants to step forward and say, “Hey, I’m not a moron, I’m a psychopath,” is welcome to do so. For now I’m being “charitable” and calling them morons, except for the ones that we know were out-and-out fraudsters.

But really, I still feel like this is just equating power with smart. Obama can add someone to his secret kill list, have them offed by a drone and not pay for it at all - what an ability to leverage causal relationships to achieve a goal. Is that because he’s smart? A billionaire can pile up fifty million dollars and burn it just to pissed people off and I probably couldn’t do that even if I made it my life goal. Does that make them smarter than me?

A fully grown man can out-muscle a toddler in almost all cases, but again, not because they are smart. Getting things done (and doing bad things without having to answer for it) has a huge amount to do with just being in the right place at the right time. I don’t know exactly what “smart” is (in literary circles it’s a codeword for “attractive”, in the case of the financial world, I think it’s a codeword for “the right kind of people”) but if it is results based then it isn’t about what we’d like to think it’s about.

In fact, every single person (other than the baby) was an adult male with brown hair and light skin. The baby didn’t have hair and wasn’t an adult (but otherwise qualified), so hurrah for diversity, right?

I’ve never quite understood why some people are so against the lottery.

It’s a tax on the innumerate, and also the only reason there is ever a line at the convenience store. 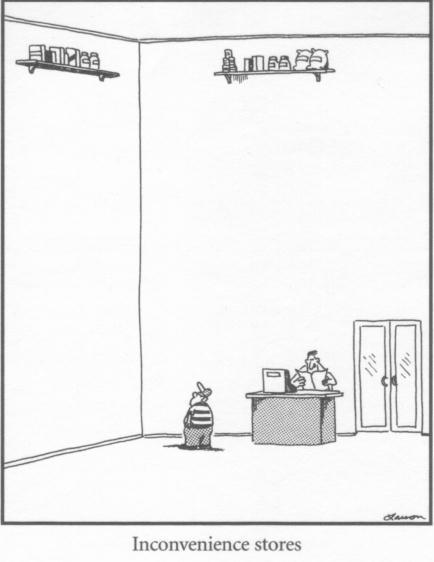 Some people (most people?) play the lottery because they find it fun to play the game of dreaming what they would do if they win. Not because they expect to win.

One lottery ticket once or twice a week, while a waste, wouldn’t be a drain on a poor person’s resources. But if you ever look at people on a line to purchase lottery tickets: they are people whom you can tell from the way they are dressed have very meager financial standing, and they’re always buying huge numbers of tickets. This is a daily event for them. They are addicted.

Another phenomenon is that poor people tend towards the lower-value, daily lotteries. They participate so often, they will “win” often and are provided with the illusion that they are making a profit. Of course, they are not, but this fuels their addiction.

Lotteries are a terrible, unredeemable drain on society, although I’m not sure they should be made illegal: organized crime will always provide a “numbers” racket, and poor people will always know “a guy” who is a numbers runner.

However, if the state is running a lottery they have a responsibility to be responsible: to -not- market their lottery so aggressively and zealously, to -not- introduce these ruinously high-priced lottery tickets ($10, $20, or even $30 a ticket), to -not- farcically claim that the money is “going to education”, etc, etc.

Even if the net profit is going to education, it’s still a big problem for people who rely on the public education system: what usually happens is that state funding is cut to match. In other words, it’s not additional money going toward education, it’s taking the place of state tax money which was earmarked for education so that those tax dollars can be spent on something else.

In other words, it’s not additional money going toward education…

That’s the point. Lottery money never “goes to education.” Its simply that the state governor draws up the budget assuming a certain cashflow from lottery revenue. Its not like they draw up a normal budget sans lottery cashflow and then toss in the lottery cashflow on top of the normal budget-- which is, I think, what the general public’s assumption is.

This “lottery revenue funding education” canard is a weird fig leaf; I guess it was originally generated as a marketing tool to ease approval by the legislature(?)