This trailer is the first we’ve seen of him since Revenge of the Sith (2005).

That made me clutch my heart a little.
Otherwise, this looks like the extended universe I’ve been wanting to see with a big budget,
what could possibly go wrong?

Better than the Gungan model of storytelling at any rate. 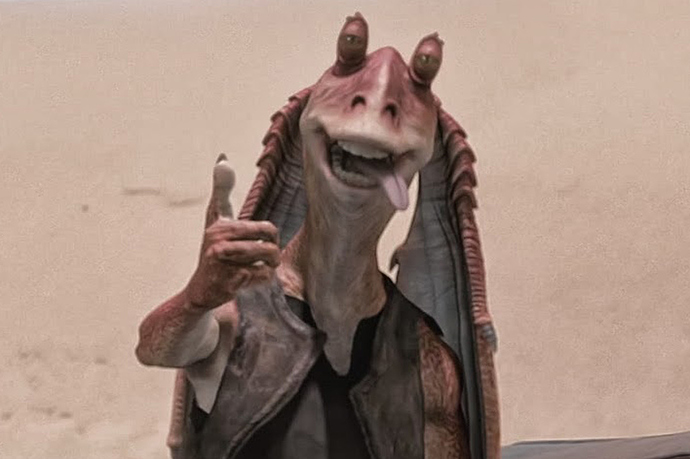 All right. Looks pretty fucking neat. I am excited. This ain’t no suicide squad (I hope).

I’m more excited about this one than that other one with the Force awakening.

Re: some tweet or whatever social media outlet on the main page.

Um, not to pull an angry fanboy, but Star Destroyers do so operate in-atmo & can hover on station. 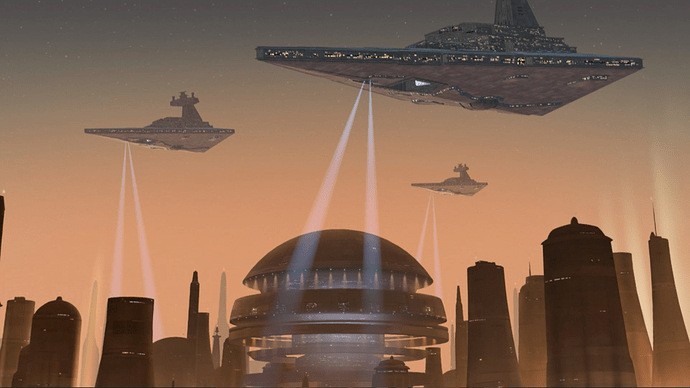 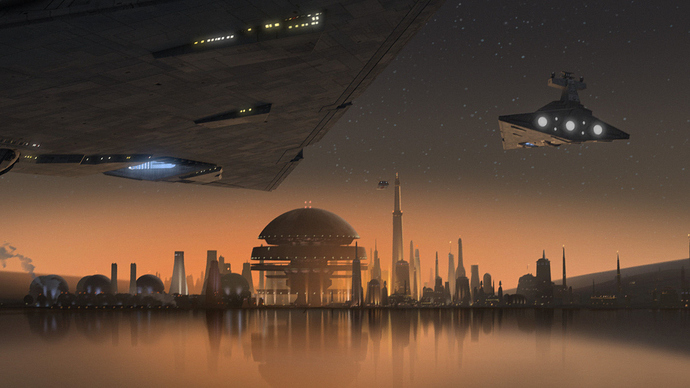 May be animated but it’s canon.

Star Destroyers do so operate in-atmo & can hover on station

But they still can’t destroy stars.

And JJ is considered the best scifi director? Jesus.

I didn’t see the most recent ST — couldn’t that be explained with shields?

Great shot of the TIE fighter rising menacingly to hover at the end of the walkway. Reminds me of Bishop’s timely arrival in the dropship as Ripley and Newt despair on the bucking platform in Aliens, except, y’know, this time it’s bad.

As an aside, what is it about (small) starships in atmosphere, or practically on the surface, that so appeals? (e.g. Firefly’s Serenity looping and twisting to shake off clinging Reavers).
Does it trick our brains to see increased verisimilitude?

This is the Star Wars I was looking for.

Why Jeremy Irons isn’t playing Thrawn I dunno, buuut I guess we’ll go with this guy.

Also, I fear that the ending will just be the heroine dying heroitragically as she hands off the death star plans, along with half the cast.

It totally does, in the same way that cars/small boats give us a sense of strong action, at an understandable scale.

It’s not a trick, it’s putting things on a recognizable scale. Think of looking at the moonrise close to the horizon versus the moon at its zenith. The original dogfights were all either in featureless space or backed by arbitrarily greebled surfaces. Those Death Star trench turbolasers could be the size of 16" main battleship batteries or they could be the size of 20mm flak guns; there are no recognizable reference points for us to tell by.

Starting with the Jedi Knight video games, we got a better sense of scale. The interior of a TIE fighter became more than a closeup of a black helmet. We saw how big the panels are relative to a person in a way that the Kenner toys completely failed to convey. The new movies, by having X-wings skimming across lakes, and TIE fighters being interacted with by “naked” humans instead of other spaceships, enhance the believability that they could exist in our experiential world.

That, plus the modern filmic understanding that “explosions cause debris rather than magically vaporizing the target” and “people bleed when they get shot.” In the SW universe I’m not expecting every blown-up spaceship to be a bomb spraying the erstwhile ship’s mass out as an expanding sphere of frictionless shrapnel… but that would be cool. Can’t think of a movie that’s done that right aside from maybe Gravity, and even that had points for experts to nitpick.