Watch: Gigantic balls (think The Prisoner) run amok on the streets of London

That’s nothing. A company I used to work for once unleashed 250,000 bouncy balls onto the streets of San Francisco. 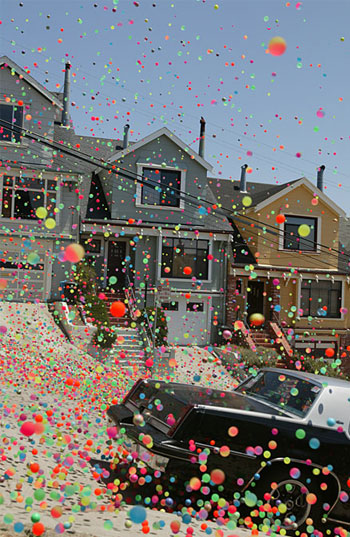 250,000 Superballs Unleashed on the Streets of San Francisco in Sony BRAVIA...

Back in July, Sony shot a TV commercial in San Francisco for their new line of BRAVIA LCD televisions. In order to make a point about the color quality of

two enormous silver-coated balls ran wild down the streets of London Monday evening (see video below). Traveling down Tottenham Court, the runaway orbs bounced past pedestrians, smashed into street lamps, caused at least one car to swerve, blocked traffic, and created a sense of all-around confusion

Are we sure this wasn’t some viral promo for a re-release of the Who’s Tommy?

So, this is what people mean by the phrase “balls out”?

serious pinball machine vibes at the beginning there. i know it wasn’t the artist’s original intent for the piece, and it’s sad they were destroyed, but MAN he couldn’t pay for better publicity. i hope the incident is a huge boost for him.

Silver coating tears off and they are WHITE!!! Be seeing you…

BREXIT means BREXIT, Number 6. There is no escape!

I remember decades ago giving directions to some noob in London and saying turn there onto Tottenham Court Road and his eyes lit up “Tottenham? Like Spurs?” Just the notion that something legendary across the globe like an English football club would have real world manifestations when they were looking for a tube stop or something was so exciting.

That’s what happens when we wage war on Christmas. CHRISTMAS WILL HAVE ITS REVENGE!

I’d like to think I’d have the balls to bump one with my car.

Can’t wait to see this year’s Doctor Who Christmas special. Looks like this year’s villains are the Mechonoids.

So far, nobody is complaining about vertical video syndrome…what a world we have come to.
The camerawork is so bad that the massive object goes completely out of frame for a moment, which would not have happened in a horizontal view.
Phone manufacturers should step in and start cropping vertical video to a paltry 4×3, using the remaining real estate on the screen to continuously showing an animation on how to hold your device correctly.
Or even better: just showing the video sideways so you will almost automatically want to turn it.

But it is too late, the battle is lost, and we’re all doomed by the TikTok generation.

There’s currently a commercial on Norwegian television for a newspaper with a big sports section where two stereotypical husbands are left alone with each other by their wives who are friends. The two men are awkwardly staring at each other until their phones ding with the newspaper’s app and they bond over both being Tottenham fans. Their entire conversation in the ad is “Tottenham? Tottenham! Tottenham!”

Apart from the annoying stereotype of men being emotional wrecks only able to bond over sports, this ad annoys me every time I think how much the English premier league (one of the weaker ones in Europe) is profiting solely from the fact that it is broadcast in a language everybody understands.

These are two Norwegians invested emotionally into the local team of a minor London borough that they otherwise wouldn’t ever have heard of. (It’s not even a borough anymore, Wikipedia tells me). It’s as if I built my personality around a team in Siena’s Palio!