To me, it looks more like a “That motherf***er’s not getting away this time!” face.

while a fellow train-goer praises him for the efforts.

He seems unusually determined to catch that train.

How is that even possible?

Recalls seeing “no clearance” stenciled on bridge supports next to railroad tracks. shivers

There’s definitely less than six inches of clearance on the Philadelphia R2 line.

How is that even possible?

Step 1 — be a stupid teenager. 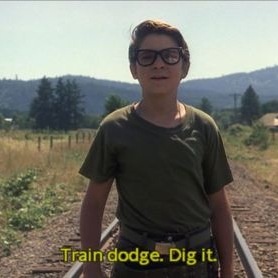 I was in NYC this weekend, and they have all those signs up about how many people were hit, and how many killed, by subway trains last year. This was not on my mental list of ways that kind of thing happens.

On the other hand - you could end up losing an arm & becoming a nazi assassin.

I found that quite distressing. I think guy on the outside did to. We both desperately want know the answer to the question “Why the fuck can’t people turn their phones sideways when videoing stuff?”

Because iPhone and iPhone-inspired smartphones (basically all modern phones) were meant to be held vertically, not horizontally.

The better question is, why does Youtube cling to the horizontal relic of an older time? Vimeo is much more forgiving with regards to aspect ratio.

Yet another way that Xerox Parc was lightyears ahead of it’s time.

I don’t know if these sorts of things still going on in Brooklyn, but when I was a kid there, it was not uncommon to see other kids hitching bus rides by clinging to the outside of buses’ back ends (Spiderman-like). Then there was the snowy weather pastime called ‘skitching’; holding on to moving trucks’ rear bumpers and sliding along on your feet.

Good to see the youth of America are looking for ever newer and better ways to be nominated for a Darwin award.

But when the video already exists, why do people not rotate their monitor to watch it vertically?

Then there was the snowy weather pastime called ‘skitching’; holding on to moving trucks’ rear bumpers and sliding along on your feet.

Now I’m reminded of the movie “Gleaming the Cube.” https://www.youtube.com/watch?v=kZzwD7I_VXY

I have seen proposals to have a larger circular sensor on phones. So no matter how you hold your phone it will be able to capture more of an image and you can crop it vertically or horizontally easily depending on how its going to be viewed. So you can hold the phone vertically and then have a nice full horizontal video. The problem is that it’d require much higher specs than what manufacturers can currently jam into phones, but perhaps some day.