WATCH: Ryan reacts to becoming one of the top finalists to die on Mars

is there a link to the full list of people? i’m wondering if my neighbor made the cut… 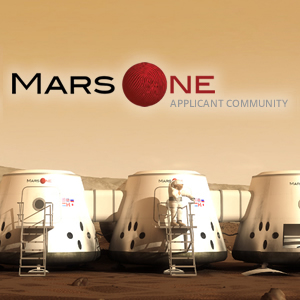 Join the global Mars One Community and become part of an online network for everyone who supports the human mission to Mars. All Dressed Up For Mars and Nowhere to Go – Matter – Medium

Mars One claims that 200,000 people have signed up for a one-way mission to the red planet. But is any of it actually real?

EDIT: yes he did. Stupid site doesn’t list everyone on one page.

In the extremely unlikely event that this actually happens, it will be interesting to see how many people actually go through with it.

thank you! and holy crap, my neighbor DID make it! she’s the first one on the list – Kay Radzik Warren. go, kay!

Is there particular why virgin Josh is paired with i-want-a-martian-baby Maggie?

Mars ain’t the kind of place to raise your kids.

A dollar’s worth of stuff costs many dollars to put into orbit, therefore, if you collect a small amount of dollars at sea level, they will automatically be worth more if you simply put them on a rocket and send them into space, it’s only logical. Money being worth more at altitude also explains why financial didtricts are full of skyscrapers. Quod Erat Demonstrandum, dear boy.

Money being worth more at altitude also explains why financial didtricts are full of skyscrapers.

Counterexample: the prices in mountain resorts.

Hypothesis: Value of goods scales faster with altitude than value of money.

In fact, it’s cold as hell.

“The Martians were there—in the canal—reflected in the water… The Martians stared back up at them for a long, long silent time from the rippling water…”

I’ll bet like 90% of the volunteers are secretly thinking, “heh, no way I’m actually going but it’s cool to be on the list.” Just wait til they find out it’s no longer voluntary.

C’mon, when all the cool kids go, not going is not really an attractive option anyway.

Is there particular why virgin Josh is paired with i-want-a-martian-baby Maggie?

Josh: I just need some space right now.
Maggie: We’re LIVING in space.
Josh: I mean I need some time by myself. I feel like I’m suffocating.
Maggie: That’s just because we’re all sharing a capsule that only has 79 cubic feet of living space and the CO2 scrubber just gave out.

Those who don’t make the cut can vicariously join the settlement by living in a mobile home buried in desert, not eating anything they can’t grow hydroponically, and agreeing to be shot by a sniper if they walk out onto the surface w/o wearing a full excursion suit.

For those not selected, don’t worry. I have purchased a derelict submarine which I have placed on the outskirts of Barstow, CA. For only a fraction of the cost of sending you to Mars, you too can get the full experience of living in a tin can on a barren, monotonous, windswept landscape.

I accept cash, paypal and beanie babies (no bitcoin).

Its really just a supply chain problem. If you launched a dragon heavy every month without any accidents, you could keep all four of them alive, healthy, and entertained for years. And it would only cost what, $20-$30 billion a year for the unmanned rockets.

So I finally have the answer to, “how do you spend a trillion dollars on four people?”.

So I finally have the answer to, “how do you spend a trillion dollars on four people?”.

The ordinary way is a bank bailout.

How many space colonies did the banksters already cost us?

The ordinary way is a bank bailout.

To all the armchair and professional rocket scientists out there, wouldn’t make more sense to establish a permanent moon base first? Sure, not as sexy, but would it be possible to generate the oxidizers and fuel on the moon stead of lifting it there? That would make the tyranny of rockets much easier to overcome, and larger payloads more practical.
http://www.nasa.gov/mission_pages/station/expeditions/expedition30/tryanny.html

Huh, so the 'pedia says there is direct evidence of lunar ice ( http://en.m.wikipedia.org/wiki/Lunar_water ) which possibly with enough power from solars arrays could be split into O and H. I wonder if the energy density would be practical to get substantial amounts of mass off the moon.