Originally published at: Watch studio lights go out on Texas weatherman as he's reporting that the heat is impacting power usage | Boing Boing

Not that the TX power grid doesn’t suck, but this seems like a local lighting issue and not a power grid issue…if they lost all power they can still broadcast and do green screen?

So Ted Cruz fled to Calgary instead of Cancun this time? Fly south in the winter, fly north in the summer?

Some broadcast facilities (not sure about Austrailia) are required to have emergency battery backup with automatic failover on their broadcast gear to keep them up and running until the generators kick in. If it is the same as the systems I have worked at in datacenters, there’s a big room filled with batteries and a transfer switch, and critical systems such as (in this case) cameras and the broadcasting setup are plugged directly in it, or at the very least the critical stuff is plugged into a UPS. Lights, not so much, other than emergency lighting which usually has its own batteries.

The real fun happens when that transfer switch fails, as they’re usually a single point of failue – when the big telco carrier hotel in LA lost its transfer switch during a routine test, it took them hours to fix it and get things running again.

I’m resting a foot on my backup battery right now.

I expected the screen to go completely dark… followed by a singular howled, “FUCK!”

More a stunt to be on social media than anything else.

Well, here’s why I think it’s a battery-room and transfer switch instead of UPS: the outlets look pretty much the same. In the datacenters I’ve worked in, where there’s a central battery backup, battery-backed-up outlets were red, and only mission critical equipment was to be hooked up to it, but since the engineers’s workstations were critical, all the cubicles and offices were given such outlets. Since most people don’t listen, don’t care, and assume if there’s an outlet handy it is fine for them to use it, all sorts of things got plugged into those special outlets. Once I noticed our generator draw was absurdly high, and found lights, coffeemakers, an ice maker, one of those portable a/c units, and dozens of other things plugged into those “critical equipment only” sockets. So, yeah, I would imagine that someone plugged some lights into protected sockets, others ran off their own mains, and so on. Sure, it could have been scripted, but I’m willing to give them the benefit of the doubt (i.e. that they’re stupid, not just greedy) in this case.

The power may not flow consistently in Texas’ Libertarian power grid but, rest assured, the profits from it will continue to flow into the same shareholders’ pockets.

Deep in the heart of Texas!

These are the small backups in the space between my and my boss’s desks. The backup battery pack for the servers along the wall make a cube about the size of a dorm room mini fridge. If it wasn’t for the overhead lights we’d never even notice if the power went off in the rest of the building. (Although if it affected the neighborhood we’d notice it due to the loss of Internet.) 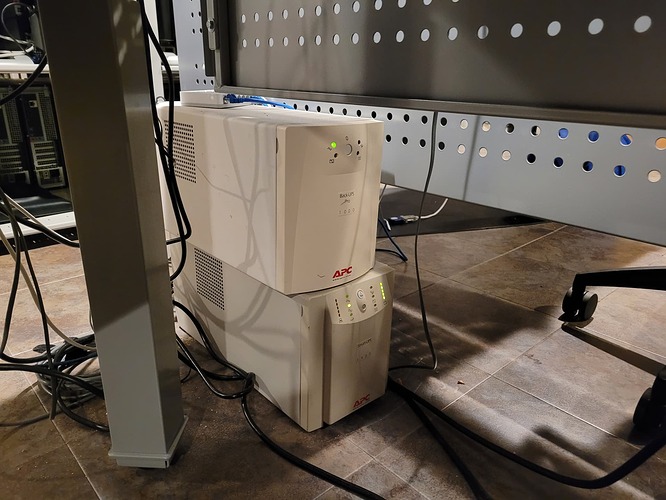 This happened to us back in the 1980s, when we had some outages caused by the overnight cleaning crew unplugging critical equipment so they could plug in a vacuum cleaner (or whatever.)

It was an effective solution. Unexplained problems plummeted after the switchover.