SFGATE published a piece on this yesterday. Some cool history on the house/project as well as some history on houses being moved around the city in the past. 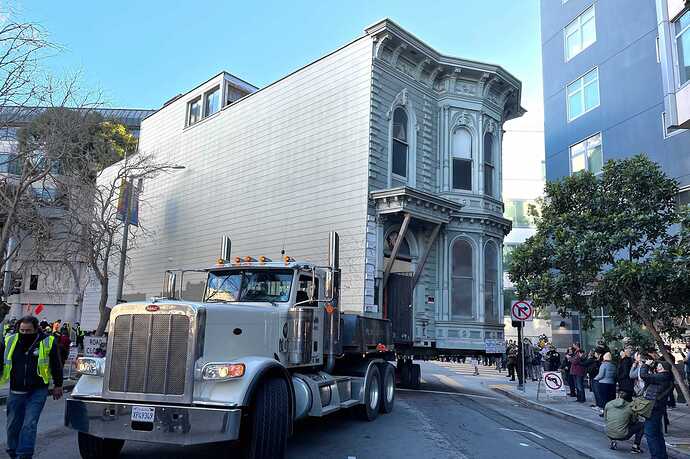 A Victorian home was moved in SF today. Here's how it looked.

For the first time in more than 45 years, a Victorian home was relocated in San Francisco...

I love the engineering behind this, but it is sad that the house is being destroyed by carving it into 7 units on the inside. I suspect that the developers are strongly incentivized to save the facade, which is certainly better than demolishing it, but the whole enterprise seems unlikely to have ever happened without a lot of civic deal sweetening for the developers. Balancing history and livability is always a challenge, but this is certainly not 100% feel good as reported.

Things I expected/visualized after reading the headline, in temporal order as the page loaded:

Context is everything, and BoingBoing provides wonderfully creative context, so I’m never quite sure what I’m going to see when I click a link, unless it’s an advertisement for something in the the BBstore- then I know I’m likely going to be disappointed, and that last statement saddens me.

In fairness, I imagine the vast majority of Victorians in the city have been carved up into multiple units by now (including the one I’m writing this from). SF needs lot of small units way more than large single family houses.

In fairness, I imagine the vast majority of Victorians in the city have been carved up into multiple units by now (including the one I’m writing this from). SF needs lot of small units way more than large single family houses.

Yea, and as noted in the article I posted above, the land is worth more than the house. I just looked on google maps and combined with the empty lot adjacent, that’s a big footprint in the city.
The article did not note if the home had any special historic designation that would have prevented it from being torn down.
My guess is, however that somewhere from zero to very few units created by this project will be anything approaching “affordable”. But, units are units, I guess in a city lacking in such.

Being that this happened in San Francisco there are high odds someone was tripping when this thing rolled by and their trip got really interesting.

San Franciscans arose at sunrise and gathered along Franklin Street to watch an unusual grand procession.

I feel like watching a larger house like this be moved is one of those things I’ve always been curious about but perhaps never seen, even in video? Very cool!

I had a great meal at a restaurant in Portland located in the Ladd Carriage House (note, it is a large carriage house) that had been moved at one point. I think across a street, but still. The above video gave me a better idea of what that would have looked like. 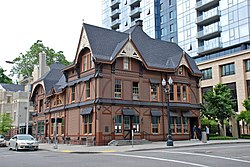 The Ladd Carriage House is a building in downtown Portland, Oregon at Broadway and Columbia. It is one of the few surviving buildings forming part of the former grand estates which once stood in the downtown core. It is listed on the National Register of Historic Places. The building served as a coach house and stables for the William S. Ladd mansion, once located across Broadway on the block bounded by Broadway, Columbia, 6th Avenue and Jefferson. The Carriage House was built in 1883, designed...