That ute is only a thousand kilos or so. The pylons are well braced and it looks like the cables which actually support the deck are in reasonable shape. And if it falls in they can probably drag it out with a winch. Just dry out the air filter and start it up again.

In other news today:
Trucker Destroys Historic Bridge Because She Didn’t Know How Many Pounds Six Tons Was

She also didn’t know how tall her rig was…

Original article (which the linked one above links to) has more details and amusing/informative commentary: 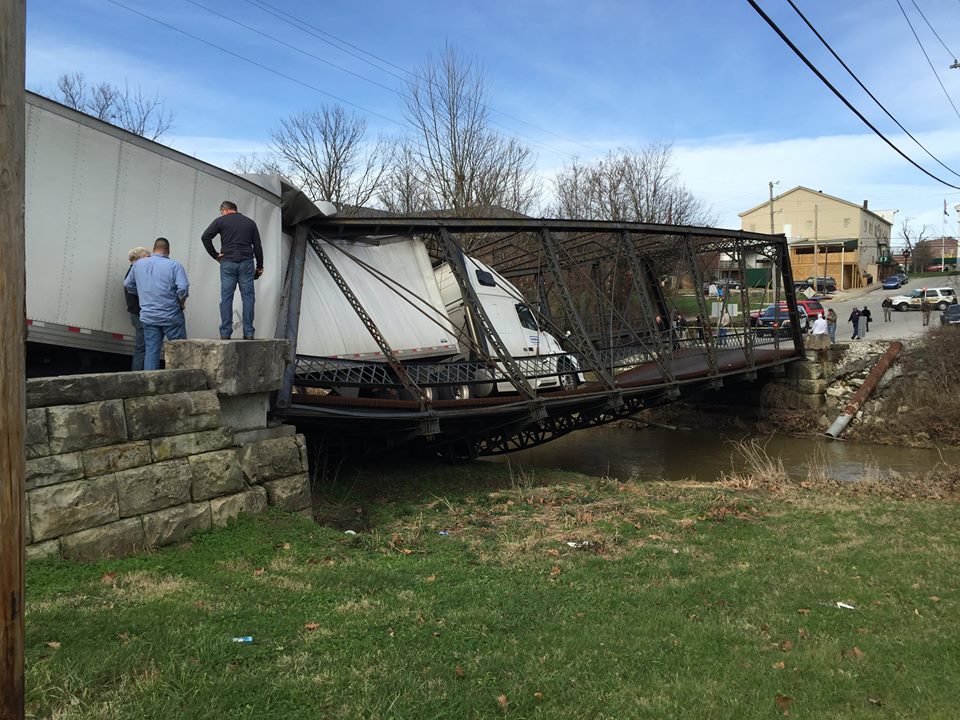 Anyone else remember “The Wages Of Fear”? Either the French 1950s original or the William Friedkin remake?

Toyota Tacomas (which I believe this truck is) weight 1900kg dry… To that, you have to add the driver & passenger, the fuel, the canoes… and the freaking boat he’s towing! And good luck trying to tow it if it lands on its roof.

I thought I saw this on an episode of Top Gear…
I wasn’t worried; nothing was shaking excessively, which would have been the precursor to a collapse.

Next week on TOP GEAR!..

Longer bridge than I expected… I hope that there is an easy way to make sure that ya don’t meet anybody in the middle.

That was frightening…i was glad he brought so many things that float on water just in case.

I haven’t a fucking clue how many pounds are in six tons. Or a ton. Or yards in a rood or whatever. I mean the U.S. Government uses three different acres doesn’t it? Or are they acers over there?

I haven’t a fucking clue how many pounds are in six tons. Or a ton. Or yards in a rood or whatever. I mean the U.S. Government uses three different acres doesn’t it? Or are they acers over there?

A ton and a tonne are approximately equivalent.

One of the less confusing Imperial measurements.

Just after the camera shuts off:

“Ok everyone, he made it across, lets try again with some slightly thinner boards.”

She really didn’t need to know how many pounds were in a ton, just that her 30-ton truck was more than 6 tons.

I haven’t a fucking clue how many pounds are in six tons.

“times 2000” counts as confusion? (Note, I grew up in metric. You can get used to running both, it tends to be annoying at times but not really that hard. More annoying is the insistence on both metric and Whitworth threads which adds cost to the shop tap/die stock.)

The construction looks simple and fairly easy to build, and by extension rebuild. The damage is likely to be localized. If said community has some skilled workers, the bridge can be back up the same day.

And if an asset is critical, you should have contingency plans anyway.

Yes, agreed. Especially since a single failure of the bridge is likely to being down the whole structure. Dominoes, etc.

What about the acre, the acer and the nacre, wiseacre?