Watch: "To each one's own" takes on a whole new meaning when talking to MAGA folk

Originally published at: Watch: "To each one's own" takes on a whole new meaning when talking to MAGA folk | Boing Boing

What? Trump supporters are hypocrites who want to curtail everyone else’s rights?

Yeah. At some point this videos, while funny, just get tedious. “Ah, more hypocrisy that we already knew existed!”

Yeah, I don’t know anyone is being convinced by these…

Whatever it is for me - but not for thee.

Yeah, I don’t know anyone is being convinced by these…

Agreed. However, I have seen a trickling in of language and concepts from progressive media into the mainstream lately a hell of a lot more than I ever remember previously. For instance, since the SCOTUS decision was officially released, I’ve seen a number of outlets taking up the criticism that “trigger law” states have the lowest investments in women’s and children’s health programs. Same with use of the terms “Big Lie” & “insurrection” when discussing Jan 6. They’re still both-sidesing everything, but maybe it signals a slight shift in the accepted narrative.

Do what I say shall be the whole of the law.

That’s less because it’s “progressive” talking points and more because stuff like that is factual.

I would say that a shifting language doesn’t necessarily mean a shift in practices.

the term “cognitive” assumes there’s some brain function going on there.

Yeah. At some point this videos, while funny, just get tedious.

I do find them funny, but I have to admit tripping up these fine thinkers and poking holes in their logic is much akin to dynamiting fish in a barrel. They really are the crowd from The Holy Grail trying to figure out how to determine if a person is a witch.

From the MAGA point of view, there is no hypocrisy. In their blinkered view, other people are wrong and must be controlled so that MAGAts can be free.You can point out the hypocrisy but they don’t understand what you’re talking about because they only see themselves and people like themselves as Americans. They live in fear that people who are actually Americans will take over “their” America.

Mr. Crowley has a sad.

They really are the crowd from The Holy Grail trying to figure out how to determine if a person is a witch.

Not really. In The Holy Grail they constructed a chain of several (wrong) ideas to arrive at a conclusion. These two folks couldn’t have linked together two monkeys from a Barrel O’ Monkeys. 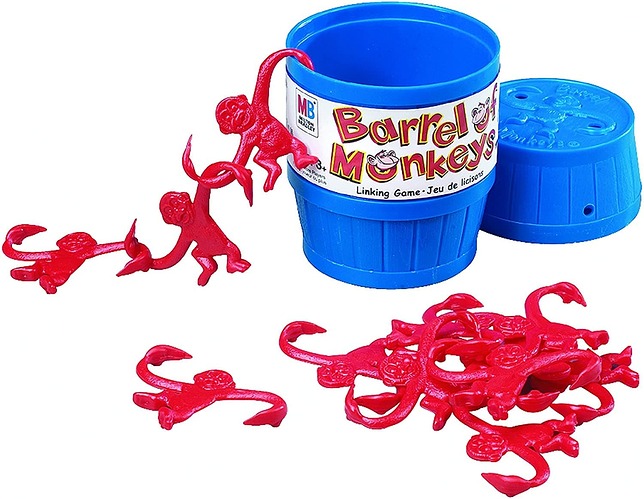 Since they refer to us as Progressives, why can’t we call them Regressives?

But it’s necessary because it erodes, bit by bit.

That’ll be a nope

It’s not a new meaning of the phrase:

Yes, the Nazis were first in their cynical misuse of suum cuique, which was a Roman principle of justice.