Water futures are "going to be ugly"

Yet another way consumers are likely to be asked to pay for this problem. That factors into their ability to relocate, too. Who wants to buy or rent in an area where utilities and insurance costs are high - along with the risks to life and property? Without buyers, how will people move away?

Without buyers, how will people move away?

The solutions to getting the right water to all the right places are actually pretty straightforward, but they will be expensive

Yep. Same with carbon capture and the shift off of fossil fuels. This is 100% a question not of feasibility or even affordability, but how soon it gets bad enough to prompt a coordinated, planet-wide response and investment into R&D that will develop the technology to address the deficiencies of our current solutions.

I recently left California in part to get away from eternal drought.

Unfortunately, this is going to have to be a major component of any strategy and people have to just accept that they may not be able to sustain a life in places that are hostile to human life without major interference. I decided not to return to California 20 years ago because of what people like EO Wilson were saying way back then. Which makes this statement:

catastrophe arrive with more force and sooner than scientists predicted

a bit puzzling. I mean, I guess if you were listening to the “debate”, this sounds accurate, but everyone I was reading and listening to in the late 90s pretty much nailed this timeline. What wasn’t known then was how much we underestimate planetary resilience and how attainable solutions really are because of that. I always thought that if companies BP and Shell invested 10% of their lobbying budget into actual solutions (not just fucking fuel additives and better catalytic converters, but actual solutions), they could have cornered the market on an inevitable 21st Century industry and owned all of the patents.

If you live in a desert it’s seriously time to consider getting out.

Better to anticipate the train and move off the tracks before everything goes to hell. As things get worse, that move gets harder. Once it really sets in, property values in these areas (both not enough and way too much water) will tank. Considering that, for most middle class folks, their home equity is most of their net worth, that will leave them pennyless when the time comes. It’s going to happen. The only question is how soon and how severe.

Really we just need fewer people living in deserts that don’t have enough water to support them.

Most of California, where the people are, is not desert. It’s a temperate zone that also happens to grow most of the US’s produce.

Western British Columbia is definitely not a desert and they had a bad drought this summer. Fun fact, it’s a rainforest.

Drought is not a “people living in deserts” problem and I’m not sure where you got that notion from.

Regardless of where you think people should live, we still have to get them water because they do live there. Saying everyone should “just move” is unreasonable. Most people can’t.

Where crops are grown in California is absolutely not desert. People need to let go of this idea. People moved there to grow food because of how rich the farmland is and consistent the water is. One more time for the cheap seats:

California contains some desert, yes. California is not all a desert, and where the people and farms are is not a desert.

It’s going to happen. The only question is how soon and how severe.

The situation becomes even more dire when you look at this map from @KathyPartdeux’s link above and note that most of the states where the climate emergency risks are worst are also those where fascists, white supremacists, and Xtianists are currently consolidating political power. 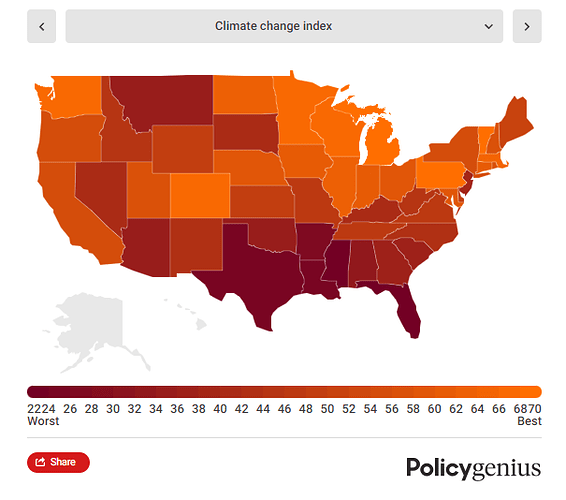 I wonder if I’m going to have to grow some of my own food?

With my brown thumb- I’d starve.

Should golf courses be fined for having green grass during a drought?

No. Golf courses should be obliterated. By returning them to real “green space.”

What a stupid, wasteful, selfishness-indulging sport that is.

Drought is not a “people living in deserts” problem

It is to the degree that desert agriculture and urban sprawl put extraordinary pressure on shared water resources ensuring communities upstream who may be able to weather sustained droughts aren’t able to. I agree it’s unfair to look at anything west of Colorado as “desert”, but anyone who’s flown over the southwest has surely noticed the shocking patches of green among all the brown. 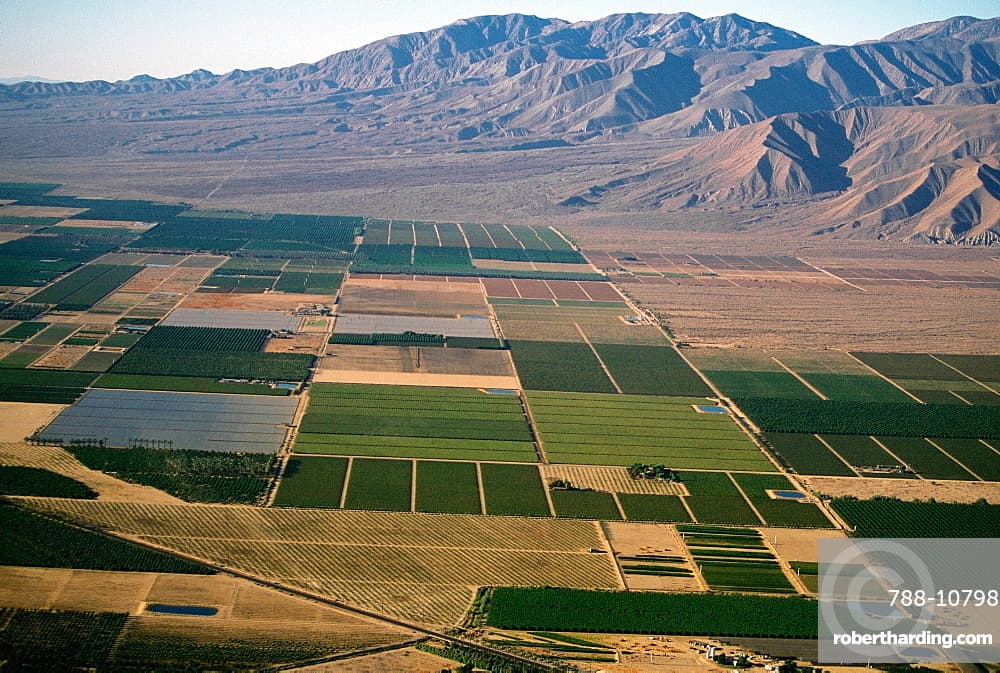 And it’s not just the fact that they exist, it’s the hubris of open-air irrigation and aerial dispersal that is really shameful. I can’t remember where I read it, but spray irrigation in a humid climate loses something like 30% to evaporation.

The fact that the land is arid and not strictly desert doesn’t mean that the farmers don’t have a strangle hold over many billions of gallons.

Oh boy, Private Equity operating the water and sewer systems. So it’s not so that PA has been crazy dry, at least?

I think if those HALO drones that seed rain with electrical fields were used it could rain/snow better in Colorado. Not so sure about California. [Comments happen: ETA rest of this paragraph.] I’m gonna need a bigger HALO drone! {And it has to propagate an atmospheric river better than work to date, so don’t break the desal backup facilities.} With an Elno Army of Legal Weather enablers just to break into the black. Can one share and reuse Elno Armies of Legal Enablers? (Legal Weather?) Potamoi on the Compliance Team, you must work from home in Colorado effective immediately!

[Reads We Are Water Booklist] The Milagro Beanfield War (2000)
Ah. Good thing they had the movie as a guide./s
Thrilled to see The Water Knife in there.

What? Also you are playing StableDiffusion on hard mode.

Growing my own food.

Gonna raise me a herd o’ glazerbeasts and panebison, make me a livin’ just chewing up the wild desolation.

Gracchus> Just read Grapes of Wrath
As a travel guide and creative nonfiction, instead of thing that was in print as it happened IRL, give or take accidents of childbirth and faking piston rings with wire. I’ll just take it as a warning that when climate immigration happens near me, I can expect characters to die -or- write that I faked a piston ring with childbirth and gave meager sustenance with old fiber optics.

The algae will be good for omega 3’s after the fish die.

So I have that going for me.

Hm, so the soft robots have to raise fish or suffer your cultivation hand’s fickle turns, eh?

Gonna raise me a herd o’ glazerbeasts and panebison, make me a livin’ just chewing up the wild desolation.

Rain seeding really bothers me. It’s an extension of the fantasy that there are endless resources somewhere that we can access with no consequence (subsoil fossil fuels, oceanic heat sink, etc). Water has to come from somewhere and pulling it out of the atmosphere will it only have dangerous unintended effects, but it’s also exactly the same issue as damming and diverting rivers; someone somewhere is on the losing end of that.

I didn’t say no agriculture was taking place in areas that it shouldn’t, just that it’s a misconception that all of California is.

People in this thread are very quick to say “well those idiots should just move”. Two things to keep in mind:

Rain seeding really bothers me. It’s an extension of the fantasy that there are endless resources somewhere that we can access with no consequence

Well, good news! Cloud seeding doesn’t work. It’s pseudoscience. It’s one of those weird topics that has zealots here on the BBS though, so I’ll not say any more about it. Let’s talk about UFOs or bike lanes instead.

Mr Hitachi and I enjoy excellent relations. We’ll come to an accommodation.

The fact that the land is arid and not strictly desert doesn’t mean that the farmers don’t have a strangle hold over many billions of gallons.

Nor did I say that water management in the west isn’t a mess of greed, outdated contracts, and political dealings.

If everyone in this thread could please stop putting words in my mouth, that’d be great.

Your choice of words, “arid but not strictly desert” seems intended to make me sound disingenuous. California is not “arid” either.

Have none of you even been to California? There’s lots of water and some the best farmland in the world. The vast majority of it is technically Mediterranean climate. 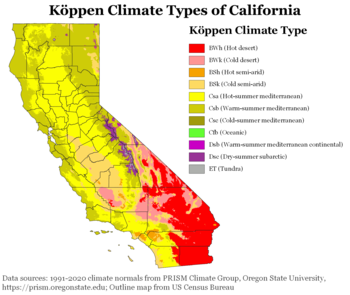 The climate of California varies widely from hot desert to alpine tundra, depending on latitude, elevation, and proximity to the Pacific Coast. California's coastal regions, the Sierra Nevada foothills, and much of the Central Valley have a Mediterranean climate, with warmer, drier weather in summer and cooler, wetter weather in winter. The influence of the ocean generally moderates temperature extremes, creating warmer winters and substantially cooler summers in coastal areas. The cool Californ...