Wealthy prisoners can pay to stay in safe, comfy jails

This man is not wealthy. There are no wealthy prisoners.

with amenities that included flat-screen TVs

Can we stop pretending that ‘flat-screen TV’ is some kind Richie Rich-style luxury good? It is literally the only kind of TV you can buy outside of a vintage shop.

Not a terrible rate, I’ll have to keep this in mind if I ever get busted in LA.

Can we stop pretending that ‘flat-screen TV’ is some kind Richie Rich-style luxury good? It is literally the only kind of TV you can buy outside of a vintage shop.

Getting your own flatscreen TV isn’t a big luxury for most Americans, but it’s still a luxury compared to the way most prisoners live. Modern amenities aren’t exactly a hallmark of state prisons.

Somehow this was so much more charming in Snow Crash.

Getting your own flatscreen TV

The article doesn’t say that prisoners get their own TVs. It says the jail has flat-screen TVs. Which, in other words, ‘the jail has TVs.’ If the journalist wants to convince me that it’s a fancy jail, they need to try harder.

6 months for $18,250? In Manhattan that kind of rate is known as “low income housing” and gets your building a hell of a tax write off. And you probably get about the same square footage… 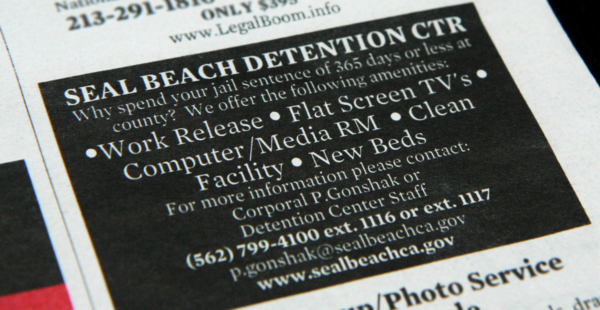 ‘This is like paradise’: Seal Beach’s pay-to-stay program actively markets its...

One reason the program is so lucrative for the small city is that it accepts more inmates charged with serious crimes — who tend to have longer sentences — than other cities.

That story has a picture of the ad Seal Beach used to run in the LA Weekly for its pay-to-stay program, which specifically markets flat-screen TVs, a computer/media room, and “new beds.”

One thing to remember about prisons is that they commonly insist on rather unusual features in electronics that are allowed inside(eg. transparent plastic housings to make hiding stuff inside harder, no parts that are especially trivial to snap off and turn into a nice shiv, battery operation because AC probably isn’t on tap and the commissary has to have something to sell at a substantial markup); which means that compatible equipment is produced by a comparatively small slice of the broader consumer electronics market, for a captive audience, and prices, features, and rates of improvement tend to reflect that.

Wired has some pictures; the…peculiar economics…of the market are egregious enough that NBC, notorious bastion of hard-hitting muckrakers, actually has an article about that.

Given that even finding a CRT that isn’t new old stock or used is pretty much unheard of; and at least the cheaper panels are likely to be cheaper anyway, I’d assume that flatscreens are supplanting tubes in prison as elsewhere; but I’d bet that they are doing so in a slower and more expensive fashion than a quick trip to Best Buy would suggest.

Whenever I hear people say that they think criminals should be forced to pay for their incarceration I always wonder if they think about the consequences:

I always wonder if they think about the consequences:1. The poor convicts’ family will be indebted for a generation or more.2. The rich convicts will be mildly inconvenienced.

They must have, because this is how they planned it to work. The legal system is a tool used by the class system. The biggest bank robbers never go to jail because their names are on the buildings.

Cheaper than the last hotel I stayed in when I was in LA, that’s for sure. Next time I’m there I might just have to get myself arrested for something benign.

It might be a very popular retirement plan in a couple of decades.

I can confirm that Aspen’s Jail (Pitkin County), has flat screen TVs and phones in most of the cells as well as nice beds and take out menus from all the fancy restaurants, a computer lab, yoga classes, etc. I’m fairly certain that it isn’t just a rumor that you can schedule massages and bodywork.

Lots of things that were once luxury goods still carry with them that brand inertia. Even though, say, Perrier is – always was – just sparkling water, I admit I feel fancier if I end up with one of those rather than Calistoga or something.

Eglin Federal Prison Camp in Florida, was coined “Club Fed” and was known for its “golf course and lobster bakes”. While it is now shut down, there are others like Yankton that are plenty swank, and those are full prisons. House Arrest is also an option for the wealthy.

The basic idea is not new–in Ye Olde days, it wasn’t unheard of for aristocratic prisoners to be allowed to pay for upgrades. Of course, this is the sort of thing that made the sans culottes a little more resentful.