I hope somebody gave that “branding expert” a raise.

Surely this photo isn’t what it seems to be. Cameras have never been allowed in (American) execution chambers in the age of the electric chair, much less after this famous incident in 1928. Perhaps it’s a wax dummy?

edit: according to this blog, it’s a wax figure of Caryl Chessman (which would date the photo to 1960 or later).

edit 2: downthread I found another photo of the same wax figure (sans hood).

the picture is the cover of this book maybe it has information on whether it was a real person or not. 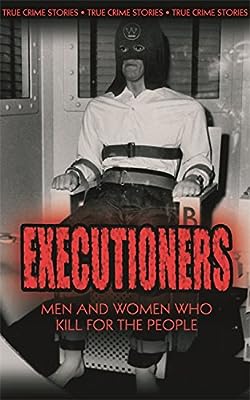 It is apparently a wax statue of Caryl Chessman in the gas chamber at San Quentin, put on display at Madame Tussaud’s in London in 1960 (here are a couple of old articles about the wax figure). The time period fits with Weegee being active in Europe. Doesn’t explain the hood, though.

Note that some of Wegee’s photos are known to have been staged. And of course image manipulation in the darkroom long precedes Photoshop.

So I’ll add my vote to “Nice piece of photographic art, not to be confused with photojournalism.”

Whatever the analog version of pixels are they are all over that thing.

Staged? A wax dummy? No way, I bet he encountered it in the wild.

You really think it’s a short leap from there to “Weegee drew an inexplicable Westinghouse logo on wax dummy’s forehead?” Do you really know that to be so, or are you slandering the artist for… reasons?

Why is it slander to note that Wegee was an artist and was perfectly capable of making his own statements – and in fact was known to have staged photos at times, as any photographer does? Unless Wegee himself stated that this one was documentary rather than artistic, there’s no good reason to believe it has to be one or the other.

The camera always lies – if in no other way, by capturing only a small piece of what’s going on, at a specific instant, selected to reflect the photographer’s ideas of what’s interesting and/or meaningful. Further lies generally occur in the darkroom as it is cropped and burnt-in and otherwise adjusted to clarify the photographer’s intent.

A good photographer uses those lies to make statements, and often those statements are truths – but they don’t have to be, and sometimes the truths are figurative rather than literal. There’s absolutely nothing wrong with that. But it does mean you need to know where and when and how a photo was taken before you can be sure of what you’re seeing.

If Weeee said this was reportage, I’ll believe it – but that statement would probably also explain why this situation arose. Without that statement, it seems so blatently unlikely that I have to believe that someone (NOT Wegee himself) has misdescribed it, and that it was a created scene – whether for the photo, or from a dramatic production, or a protest, or whatever. Note that some of these would make it a wholly legitimate piece of photojournalism, but would invalidate the description we have of it.

Why in the world would they give the condemned a hood with eye holes? It makes no sense.

Why in the world would they give the condemned a hood with eye holes?

So the soul can leave the body.

I think because a lot of Weegee’s work was considered photojournalism, or was misrepresented that way, and staging is unacceptable. Some of his work clearly was not staged.

He was certainly a photojournalist; he got his nickname (a variant on “ouija”) because he had a knack for showing up at newsworthy scenes before anyone else.

But that isn’t all he did, and even some of the journalistic photos are known to have been staged for effect. Which is far from uncommon, whether the public considers it unacceptable or not.

When an image is staged, ie. a portrait, it is considered okay provided that it represents an editorial. I’m not disputing that photographers may set something up for effect, and call it news, but I wouldn’t go as far as to say that it is common practice. You will lose your job and reputation rather quickly as a photojournalist if you do that and there will be a multitude waiting in the wings to take your place.

I think that, in the past, much more manipulation was acceptable in image creation for news organizations, like setting up the composition, burning and dodging, etc. That is seriously frowned upon now. Basically, you have the ability to crop and color correct, maybe adjust tone, but beyond that you can be in deep shit for altering and creating news.

And I want to say that I love Wegee no matter what he did.

Here’s another photo of the same wax figure, with no hood, which has also somehow fooled the seller (even as they remark on Chessman’s waxy, statue-like appearance).