What are the rules of the demagogue? Looks like the Republicans have checked all four boxes

Originally published at: What are the rules of the demagogue? Looks like the Republicans have checked all four boxes | Boing Boing

I’ve always wondered about the parallels between some of the Roman demagogues and Trump. Seems I wasn’t the only one. Spoiler alert: somebody’s mob storms the senate.

Meet the Trump of Ancient Rome, a Populist Demagogue Who Helped Bring Down...

The roots of populism stretch back to the beginning of the end of the Roman Republic. The man who ultimately brought down the system was a wealthy and am...

I think that brave leaders who gave everything - including their lives - to fight to get the most dispossessed people out of abject poverty and into equal protections under systems of constitutional law, people like Hugo Chavez and the Ché, have little to do with self serving assholes like Trump.
And I know that in order to build this center-right fatalist paradigm where financial markets are inevitably and forever to stunt human potential and cost human life, the citizens of the most powerful empire in the world must swallow that whopper of a lie wherein ‘any’ strong leader who can push against power structures is to be resisted at any cost. Since it’s the poor who are paying.
And so you get this absurd and insulting video where ‘both sides’ are just as bad and pretty much ‘the same’.
They’re not. Motives matter and outcomes matter a hell of a lot.
Think about how hard it is going to be, right now, to curb the power and influence of Amazon, Walmart, the private prison industry, Big Pharma and the banks.
What kind of mass movement would it take?

Eeehhhh you can maybe make that claim for them at one point, but once they got into power it was ruthless authoritarianism. Especially Chavez. He enacted programs to placate the masses, while he and the sycophants around him siphoned off the countries wealth. There are a lot of Venezuelan ex-pats in places like Spain doing juuussstttt fiiiinnneeee thanks to Chavez’s regime.

I think there are other people we could point to for following their ideals, with out trying to white wash the indefensible.

I disagree.
It’s ok. But I think that if I’m willing to defend someone like Obama, I can defend Chavez.
I have lived in South America for over 15 years and have also gotten very familiar with the sob stories of the European-descended middle class who dictate the narrative that the US and Europe hears and believes.
Because “the masses” as you call them, don’t count as much as “the country’s wealth” (markets, again) So we don’t talk about the US blockades and interference causing the economic damage they were designed to cause. Rather, it’s just chalked up to “corruption” of those pesky populist leaders.
I can tell you that placating the masses is a good thing to do when hunger, cold, lack of medicines and education are their cries. I will defend that. And until you can show me a leader of a major world country who could cast the first stone, I won’t let you pretend someone who successfully fought poverty and the impoverishers is somehow chaff.

Has the Republican party actually “completed its transformation into a fascist, authoritarian death cult,”

You can certainly point out lots of places where the US was fucking things up. But don’t use that as a reason to white wash Chavez’ sins.

Providing basic goods and services is a good things. Doing so while creating an elite class is not. Given the country’s position when Chavez died, and it’s current issues, I don’t know if I would count him as someone who “successfully fought poverty” and lived long enough to become the “impoverisher”. (Specifically putting all of the eggs into the oil basket which could not survive changes in oil prices. You know, markets.)

while creating an elite class

creating an elite class?!
Are you kidding me, man?
How did we get from an colonized South American country with an overwhelming majority of poverty and extreme poverty, with an elite European-descended bourgeoisie, to the notion that it was the Socialist government that is to blame for the lack of total class equality?
Preposterous.

I am from the USA and completely understand that any sort of socialism lead by people of color is so taboo in our zeitgeist that I must sound like a lunatic for saying that I respect the heck out of Chavez.

But I came to that by seeing what his coalition accomplished, and what hope his figure represents to millions of this content’s people.

I can’t with any integrity make proclamations about any government that fall into neat little ‘good’ and ‘bad’ buckets. But I have come to be pretty sure that what’s good for the goose absolutely cannot be forbidden for the gander - because that’s just a trick the colonists use to keep any real change from being sustained.

The failure of well-meaning governments to completely eradicate corruption, self seeking, power, unfairness, elitism and extractionism, on a capitalist planet should only disqualify those governments to the extent that we also disqualify liberal governments for the same failings.

But nobody thinks like that, precisely because we all know, accept, and sometimes admire Capital’s ruthlessness. So, to some extent, when liberal market systems produce inequality, corruption, brutality and discrimination, it’s sort of viewed as either a necessary evil, or even a feature.
At the same time, since leftists are idealists, the failures and shortcomings when leftist capitalists, socialists or communists govern, anything shy of paradise is bemoaned as ‘proof’ that the old ‘end of history’ lie is truth, and that the liberal democracy as practiced since 1776 is the “natural” order of politics.

There are a lot of Venezuelan ex-pats in places like Spain doing juuussstttt fiiiinnneeee thanks to Chavez’s regime.

Here in Spain, the only Venezuelan ex-pats that are doing fine are those who fled Venezuela with all their riches when Chavez won the elections and now live in Barrio de Salamanca, Madrid: the most expensive and exclusive neighborhood in Spain. They constantly push for a coup d’etat in Venezuela and consistently vote for far right fascist parties for government in Spain.
The others are those who barely make a living working as waiters or Glovo riders.

“completed its transformation into a fascist, authoritarian death cult,”

It completed the transformation a long time ago, the mask is just starting to slip off.

I think Chavez was well meaning at one point, but slid into authoritarianism and anti-democracy. 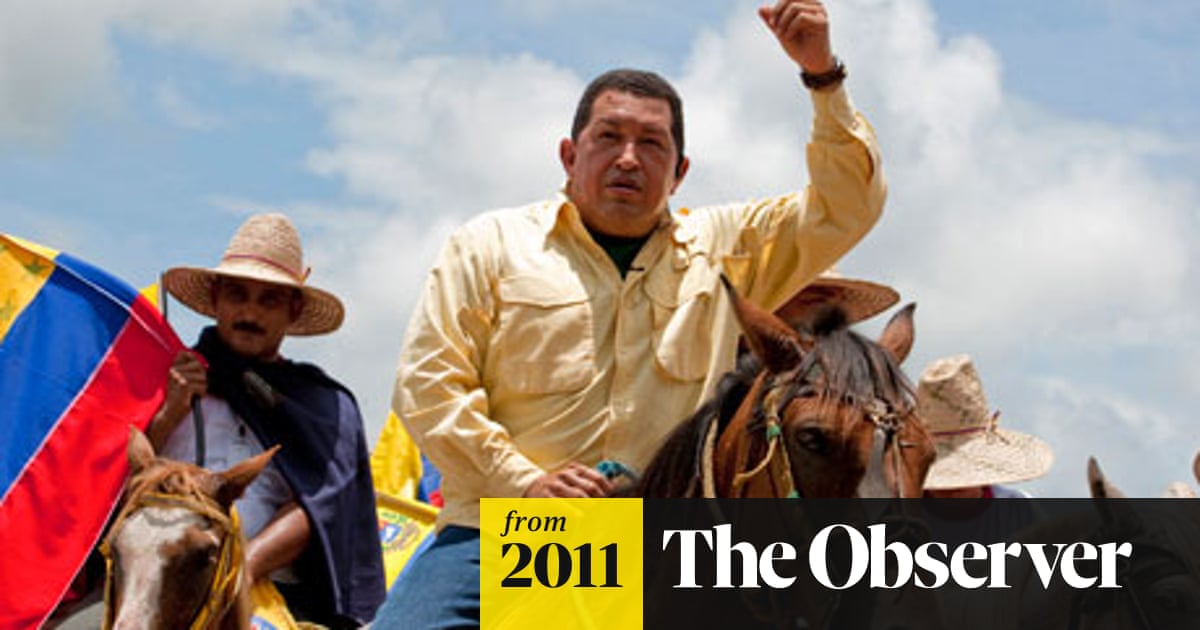 And more to the point - given the criteria of a demagogue - Chavez was one.

Ok, I’ll simmer down a little.
I agree that concentrating too much power in one leader’s hands is a problem and should be criticized.
But again, not more than other failures to completely restructure the world.
This strong popular leader paradox is a shaping feature in my family’s life - so I speak from a place of personal involvement.

The example of what kind of movement it would take to curb the Koch/Pharma/Amazon etc. of our economy serves to help think about what type of almost mythological figures would need to be leading it.

And since liberal democracies can’t allow those kinds of checks on Capital, we are raised on the (healthy, I think) idea that there’s such a thing as too-powerful elected politicians (of course the Kochs can be as powerful as the system helps them become). So, to paraphrase an idea that Cristina Fernandez de Kirchner developed in one of her speeches, governments are the only thing currently that are powerful enough to limit corporations and big money. But, in democracies, accumulating the type of influence and connections that would allow a coalition to succeed when taking on Capital requires a lifetime of build up, with professional politicians who have acumen and the ability to wield real power. So, she continued, all these calls for term limits and volunteer representatives and decentralized governments, are at their core calls to serve the interests of Capital - if you want your leaders to change all the time it’s because you don’t want anything to change.
I’d elaborate with the concrete example - Trump was touted as the anti-politician. The swamp, etc.
That makes him completely different from Castro, Chavez, Guevara, Lula, Nestor and Cristina, Evo, Correa and Mujica (each, in turn, different from each other).
But, back to the paradox of the strong leader for successful popular movements: I think that we humans are overly motivated by narratives. It runs deep. So, these movements just don’t get off the ground until they have someONE special to follow.
And then, as we’ve seen over and over again in South America, when that leader is finally out of the picture, it all goes to hell and Capital is back running the show and punishing us ordinary workaday losers for having stepped out of line.
So, you and Chomsky are right that we need movements that function without these larger than life leaders. But, at the same time, we more urgently need food, energy subsidies, human rights legislation, a check on those goddamn military coups-in-waiting that Capital continues to keep, checks on the newfangled lawfare that makes democracy only a performance while returning old colonial governance. And for the latter, it just never gets going without an iconoclast to rally behind.
Then, that person is ousted and Capital comes back with a vengeance.
Rinse, lather, repeat.
I reckon that when Capital is diminished, their opponents can be as well.
But hell if I know how to get there.
What I think this discourse with you has helped me map out in my mind is:
If I can begrudgingly continue to approve overall of, say, Obama, even though he appeased the rich and squandered the nation’s wealth with the bail out and created more extra wealthy elites yadda yadda, doing so because the cards were stacked against his better desires, I can also easily support Chavez or any other popular figure who appeased the poor and perhaps squandered the nation’s wealth and created some new more extra wealthy elites - because the cards were stacked against his better desires.

If you’re based anywhere near Madrid, let me offer you my condolences. That was a kick in the gut …