Rules for surviving an autocracy

I can see that you’re posting a lot of timely and crucial pieces right now. Thank you!

Serious question: what if the autocrat regularly contradicts himself?

It’s probably safest to assume the worst thing he said is the one he means, but that’s hard to determine sometimes. Also while it will be useful in being prepared for the worst, I suspect it doesn’t have great predictive utility.

autocrat: tRump will not disappoint

Thank you. It is hard for Americans to appreciate how easily and insidiously and quietly these things can happen, even in an “exceptional” country. Putin is the President-elect’s stated model for “leadership,” not Hitler. He’s demonstrated that institutions (the press, banks, government agencies, legislatures, courts, etc.) can be compromised to the point where they do the autocrat’s bidding as a matter of course rather than coercion.

Masha Gessen knows what she’s talking about. Along with the members of Pussy Riot she’s one of Russia’s BAMF women.

when they promise ugly, mean-spirited attacks on perceived enemies they rarely contradict themselves and must be taken seriously.

This is it exactly. This man played well into the needs and desires of bottom feeders and called out people who have nothing invested in democracy. The idea of wrecking something appealed to them and they put this sociopathic, narcissistic opportunist loose to do the havoc he can. There is profit to be made in chaos and trump will profit grandly. Any and all others will suffer because his only ally is himself. Checking him and the cowardly republican party who helped create him is our only chance to preserve anything while he is on the loose. Worst than him is that hate-infected bigot he chose for a vice president… Masha Gessen gives good advice.

[quote=“nemomen, post:5, topic:89311, full:true”]
The principle is more not to dismiss, minimize, or interpret what autocrats say as hyperbole.[/quote]

Yes. Note this passage from the Gessen article:

More recently, the [New York Times] made a telling choice between two statements made by Putin’s press secretary Dmitry Peskov following a police crackdown on protesters in Moscow: “The police acted mildly—I would have liked them to act more harshly” rather than those protesters’ “liver should have been spread all over the pavement.” Perhaps the journalists could not believe their ears. But they should—both in the Russian case, and in the American one.

The complacent might give some thought to why the NYT chose to use the more “genteel” quote instead of the one that shows the true brutal face of the Putin regime. They should follow up by considering how much stronger that impulse toward comity would be when the paper is reporting on an American politician.

Makes sense to me.

About the last bit about Obama meeting with Trump. That’s just protocol, isn’t it?
I mean, the transition has to be made, and Obama can’t just ignore him until the inauguration (or at least shouldn’t).

Agreed about the transition, but see her second rule: do not be taken in by small signs of normality. That’s especially true following an unusually contentious and chaotic election when the uncertainty is (supposedly) gone and establishment figures and markets tell us everything is back to normal. This is not a normal President-elect.

What are the rules for defeating an autocracy?

Well, the level-headed dude that he is, I do trust Obama not to kiss his ass.

I also have the feeling that we haven’t heard the last of the Obamas politically, and they’ll be working as hard as ever to fight the continuing/increased obstructionism.

who are discarding their long-held scruples to embrace his radical positions.

Agreed about the transition, but see her second rule: do not be taken in by small signs of normality.

What are the rules for defeating an autocracy? Civilian deaths: Operation Overlord was the codename for the Battle of Normandy, the Allied operation that launched the successful invasion of German-occupied Western Europe during World War II. The operation was launched on 6 June 1944 with the Normandy landings (Operation Neptune, commonly known as D-Day). A 1,200-plane airborne assault preceded an amphibious assault involving more than 5,000 vessels. Nearly 160,000 troops crossed the English Channel on 6 June, and more than two million Allied ...

I also have the feeling that we haven’t heard the last of the Obamas politically, and they’ll be working as hard as ever to fight the continuing/increased obstructionism.

It would be awesome if he became a real activist for social justice once unfettered by the constraints of the first office.

Yeah, and since Obama represents the rule of law, and Trump was elected in a legal election, he can’t just have Donald tossed into the White House shark pool. (It’s under the press room.)

That’s the trouble with it. You can’t make the first move against an autocrat-elect because you’d break the system you’re trying to uphold, and give the autocrat and followers the excuse they need to get on with the autocrating.

On the other hand, I can imagine Republicans making some hay from this: 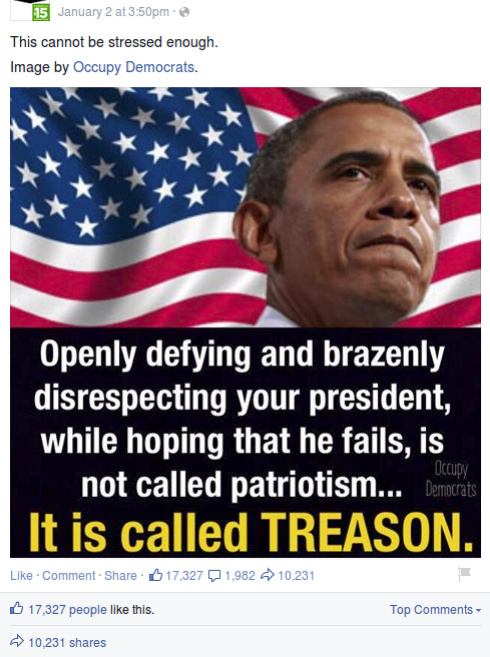 I saw what they were trying to do with a number of memes like this that have been going around over the last few years, but I also thought that it probably wasn’t the best argument to push.

Those Russians, East Germans, Hungarians, Poles, Bulgarians and others who have lived under regimes now part of the global capitalist machinery need to teach us how to cope. They’re human corpuscles now. We need them to show us how to survive - at least in the medium term. Because right now we have no idea.

I mean, aren’t you now looking at your past life and suddenly seeing it as the twinkly, enlightened, happy yet cosseted and sheltered existence it really was? Sure, Thatcher and Reagan were enemies of social justice and dismantled much of the benefits of human advancement achieved after the second world war, but Trump is on a totally different level. Him and his medieval alt right legions are on the attack. From now on things are going to be very, very different for all us.

I can’t pretend I’m not terrified. And that’s even without thinking about his repeatedly stated intention to destroy the earth by increasing greenhouse gasses by orders of magnitude in the next five years. But perhaps uninhabitable coastlines will start to seem the least of our problems. Like the reliability of Trabants, or the lack of chocolate in shops were while the Stasi accused you of sedition for wearing a safety pin.