What do you do when you've got a plumbing clog?

I have one of those ones that blasts compressed air into the pipes and it is the only thing that has worked consistently for our older bathroom sink. I’ve heard this can cause issues with pipes in the long run, though…

My landlord’s father, a plumber, has begged me to never, ever use Drano or any caustic dissolvers, as they do terrible things to pipes.

Note 1) if you spend this much time buying and trying different drain unclogging tools, you probably need a plumber and a willingness to hear some bad news.

Note 2) in a case where the homeowner I was renting from was unwilling to hear bad news, we did have success with one of those enzyme-based uncloggers. A pro-tip, however: many of those things have a horrific smell, and getting them into the plumbing where they need to be can be challenging, especially if your house is improperly plumbed with weird angles and the like. What I figured out is that you can generally pour this stuff down the roof vent, and it will bypass the places where it would fumigate your house and typically go straight to the problem. We’ve done the same at our current house, also with success.

Extra points if you did it all wearing only a bath towel.

I think it’s usually a question of what you are using and what your pipes are made of. The enzyme stuff is usually fine for copper or PVC, but interestingly is really bad for porcelain, so where you can pour it in is sometimes an issue.

You can rent a power (plumbing) auger at Home Depot, or buy a used one off Craigslist.

Or just suck it up and pay for someone to come do the nasty job for you.

My favorite, very minimalist clog-busting solution is to just dump a good amount of dish soap down the drain. I’m always surprised at how well this works.

Oh man, that was soooooo good. I need a smoke.

Yeah, the enzyme stuff isn’t as bad; he was mostly talking about lye and Drano type things. He said something to the effect of, “Best case scenario, you get the clog out and eat the inside of your pipes a little bit each time. Worst case scenario, you DON’T get the clog out and call a plumber, and now he’s got to deal with a pipe filled with caustic liquid that might come spraying out in his face at any moment.”

Where are teh clogs coming from? In old houses a lot times you get roots into the pipes running from the house to the street. we used to have to get them cleaned out once a year or so.

The key to successful “plumber’s snake” usage is to get the type that attach to power drills. It saves the wrists/arms from some serious discomfort.

Mine was similar to this one: 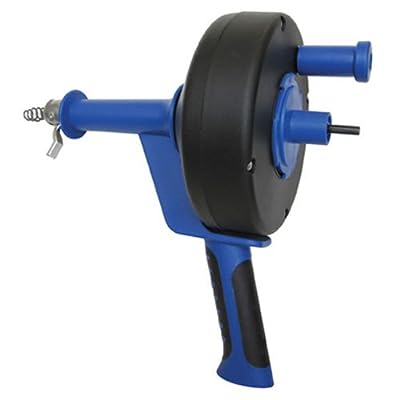 I was staying in a basement apartment, many years ago, and the owner was a professional plumber, I believe. We had a blockage, so he ran a power auger down into our toilet. Apparently those things can go pretty far into the pipes, and he did not notice when it came up through a drain in the floor in our living room, maybe 25 feet away. As it was still rotating at high speed, it proceeded to act like a sprinkler, flinging droplets of toilet water over everything in the livingroom. We moved out pretty shortly thereafter

We have a weird plumbing issue. Maybe someone can help.

Sadly this tale starts with our cesspool.

“Why,” you ask, “In this day and age does anyone have a freakin’ cesspool?” Good question. But the news is that they are still alive and well here in Long Island.

So we have one and we got it replaced recently with one so large you can swim in it if you wanted, but I’m sure you don’t want that.

Yes, these drain, inappropriately, to our cesspool and not to some separate gray water area. (This can be fixed for a lot more money than we want to spend right now)

For some reason the washing machine drain now will overflow sometimes, only if I run several loads in one day. Otherwise it’s fine. This didn’t used to happen with the old, small, overloaded cesspool or the similar to what we have now washing machine.

Hubbie usually runs a snake down after this, but I’m not sure that it’s a clog that’s the issue since it only happens when we run several loads.

I don’t have an answer for you, but would recommend a lint filter (washer condom) on the drain hose as cheap insurance.

I keep popped ones around – you can use them like a plunger down the line… If the bladder has a small enough hole, it will still partially inflate and then you can just ream the hose back and forth – occasionally does the job when nothing else is successful.

Generally, If a gentle plunger session doesn’t do the job, my first grab is the good ol’ snake, then move on to the bladders/etc.

I have one of those ones that blasts compressed air into the pipes and it is the only thing that has worked consistently for our older bathroom sink. I’ve heard this can cause issues with pipes in the long run, though…

It can also blow apart fittings, especially the P-fitting under the sink which is usually only hand-tightened. I really wish I did not know this through personal experience.

Depends how much you want to spend. A plumber charged my mom around a thousand dollars for clogged kitchen sink (and would have charged an extra fee for coming within 3 days).
The clog in that case was a ways down outside the house, and I couldn’t reach it with one of those drill powered motorized snakes.

Since then for my own clogs, I’ve rented the larger motorized auger when the clog was outside the house. The problem is they don’t go around bends very well. So I have one of these bladders
and have yet to use it, but it looks like a good idea.

My plumber friend warned me not to use, those pressurized canisters (as they may end up bursting the pipes) or any of that caustic chemical stuff. His advice was also to boil up a large amount of water and run it down the kitchen sink once in a while to dissolve the buildup.

The key to successful “plumber’s snake” usage is to get the type that attach to power drills. It saves the wrists/arms from some serious discomfort.

Amen to this! You do have to be a little careful, though… if the snake gets hung up, you’ll kink the coiled wire part and it can be hell to get it back out.

I have the exact one you linked to, and I highly recommend it.

As not-great as that must have been, having your plumbing fail somewhere that’s obvious & easily accessible is in many ways a best-case scenario.