I’ve been arguing for a while that the GOP membership aren’t really conservatives anymore. Instead, they’re reactionaries, who have been defining themselves by what they’re against for a generation-plus at this point, not what they’re for.

But that got me pondering if the GOP even has an ideal at which point they’d go, “We’re satisfied,” and what that society would look like?

Agree with @TobinL, Hell on Earth, but in the name of JAYSUS!!! All white people with a few at the top and everyone else at the bottom. If there are are non-white people, they are ignored.

Yes, with the GOP demons eternally pitchforking non-whites and anybody else who isn’t welcome in Mayberry.

Being for the status quo ante is pretty much the dictionary definition of reactionary.

Not really sure, but I’m damn sure there’s no room for my family in it.

Not really sure, but I’m damn sure there’s no room for my family in it.

Nor mine. Or really anybody else’s aside from the nobility.

It’s Mar-a-Lago’s all the way down.

If there are are non-white people, they are ignored.

It’s surely affected by my location, but I get the impression that the south before the civil war is basically what they would prefer, except with modern technology.

They would be OK with having non-white people around, only as long as they are slaves, and subservient to any white person. I also expect they would like Christianity to be enforced under penalty of death.

Someone up-thread said hell-on-earth? Yeah, that pretty well describes it.

I think the GOP want a US that is competitive with China. That means a large workforce with little education and depressed wages, working too many hours with too little labour protection to organise effective collective action.

No or few cities. Agrarian economy. Education systen geared towards…

Oh wait. I know exactly what it would look like.

This image of Sao Paulo kinda sums it up for me:

image.jpg780×438 205 KB
Rich people (WASPs only, though) living in heavily guarded luxury enclaves surrounded by the destitute masses. This image needs more dead old people and dead babies in the streets of the favela to be complete, though.
34 Likes
cameronh1403 21 March 2017 16:09 #14

except with modern technology.

Be perfectly fine with taking that away from them. They have shown that having access to that much information is too much for them. Better they live in ignorance away from the rest of us.

This image of Sao Paulo kinda sums it up for me:

“To be a man in such times is to be one amongst untold billions. It is to live in the cruelest and most bloody regime imaginable. These are the tales of those times. Forget the power of technology and science, for so much has been forgotten, never to be re-learned. Forget the promise of progress and understanding, for in the grim dark future there is only war. There is no peace amongst the stars, only an eternity of carnage and slaughter, and the laughter of thirsting gods.”

They would be OK with having non-white people around

I guess they believe in a strictly hierarchical economy with a large foundation of work slaves, but do the rich have to live near (or even - gasp! - with) the poor?

Propeller Island (French: L'Île à hélice) (also published as The Floating Island, or The Pearl of the Pacific) is a science fiction novel by French author Jules Verne (1828–1905). It was first published in 1895 as part of the Voyages Extraordinaires. It relates the adventures of a French string quartet in Milliard City, a city on a massive ship in the Pacific Ocean, inhabited entirely by millionaires. A French string quartet (Sébastien Zorn, Frascolin, Yvernes and Pinchinat), traveling from San...

When Infinite first came out, people on the right were unironically reposting some of the game’s promotional propaganda art as inspirational material, so… yeah, basically.

When Infinite first came out, people on the right were unironically reposting some of the game’s promotional propaganda art as inspirational material, so… yeah, basically.

I missed that! Got any good examples? I want to show my friend the folklorist. He’s not at all into gaming but would probably find that fascinating. 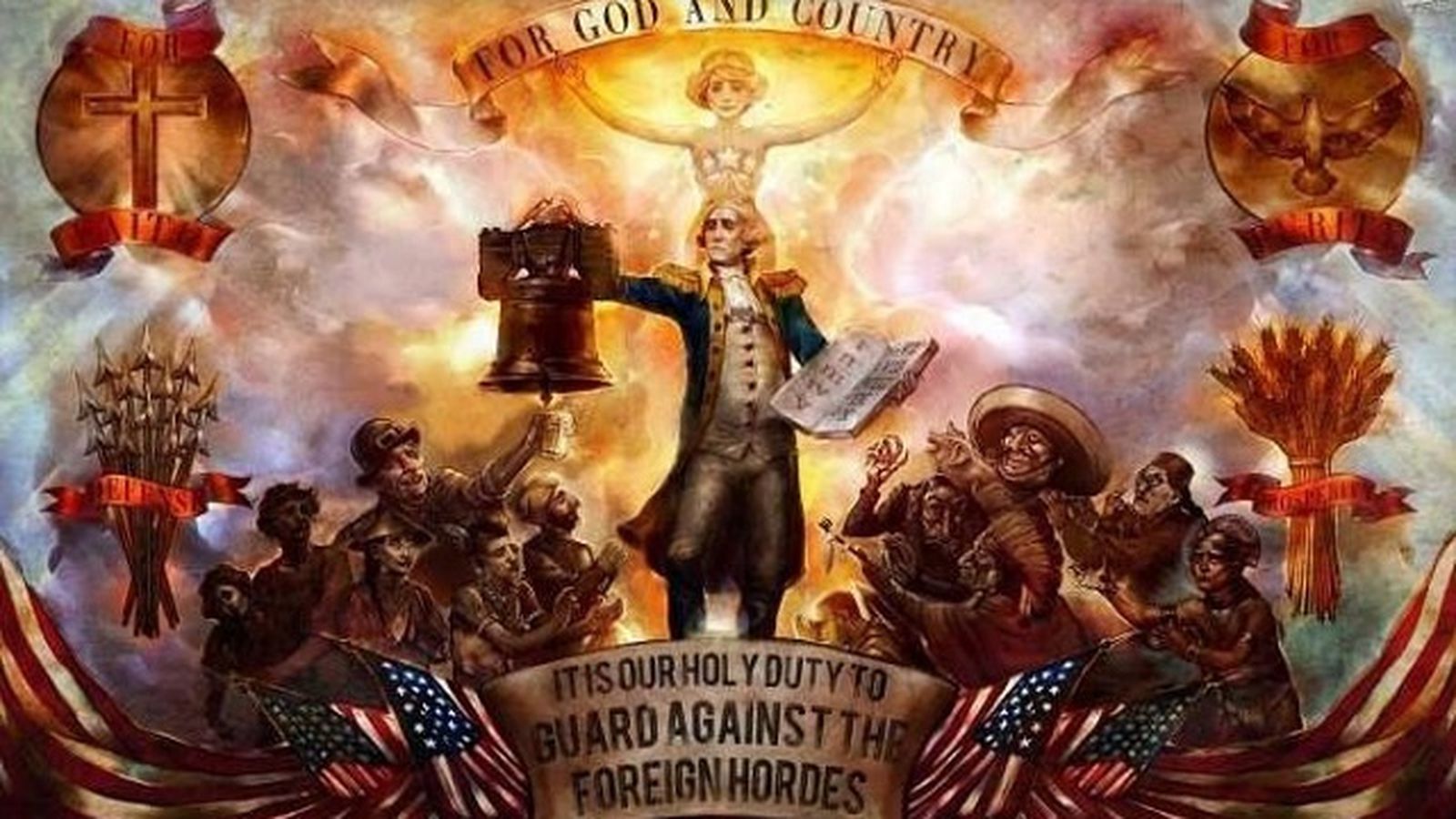 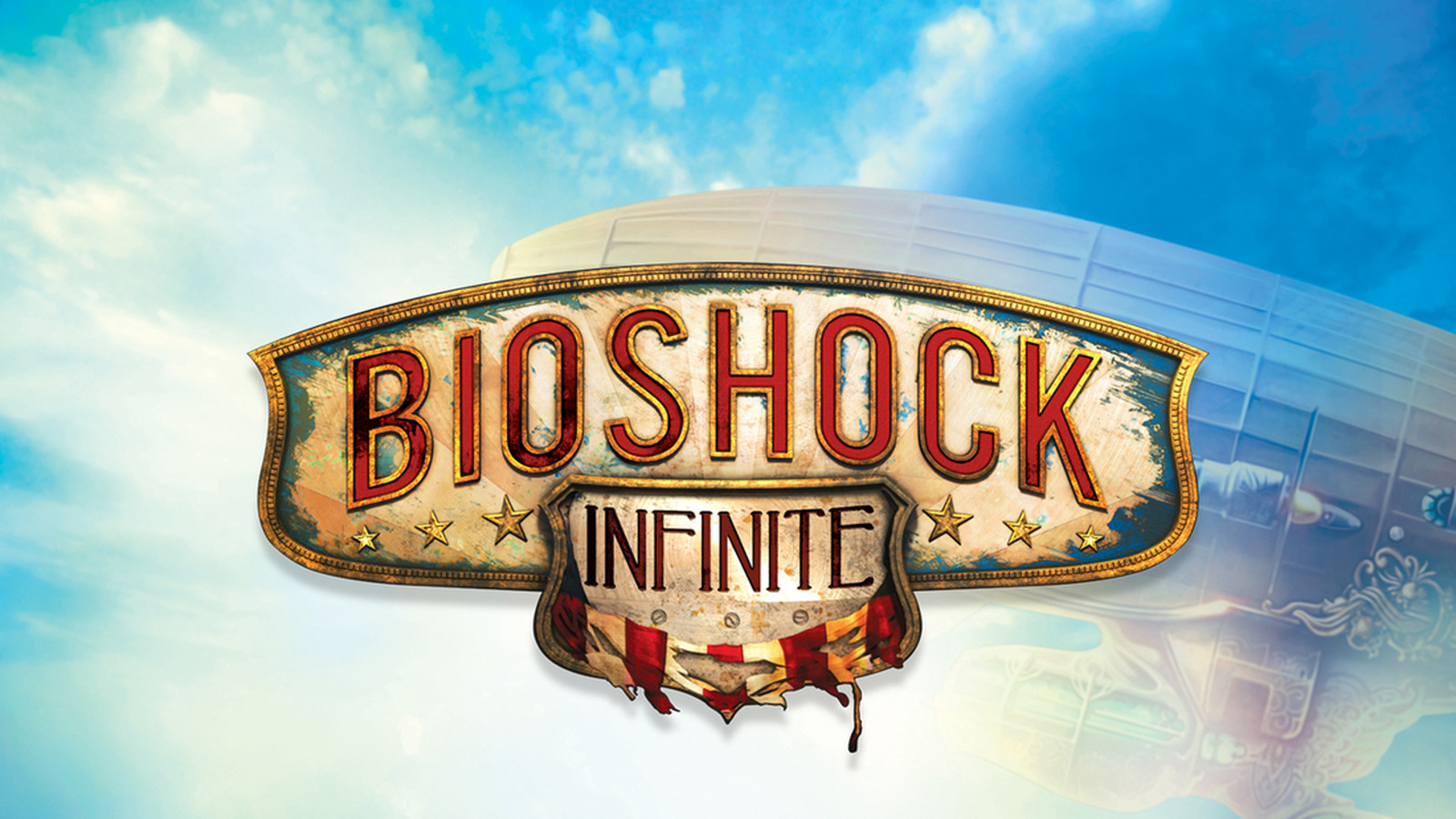 Fox & Friends revealed the new logo for Defending the Homeland, a topical segment on immigration, and it shares a striking resemblance to the logo for BioShock Infinite — you can see both images...

(Bonus bonus, of course the segment aping Infinite’s logo is all about immigration.)