Early Twitter employees tell Bilton they regret their involvement in a company that became a tool of the alt-right, while a former developer says he regrets not building a tool to fight trolls.

So how about stopping the regret parade and building such tools now?

I left Twitter last year (as well as Facebook) for all the anger and verbal violence that started to emerge there. I’m totally done with social media.

So how about stopping the regret parade and building such tools now?

lack of will or care from the execs.

And every change they make, instead of useful things smart people have requested for years like these abuse tools, seems designed to enrage their existing users.

I understand, they’re desperate to get new suckers using it, but things like spitefully putting the useless new Moments tab right where a commonly used tab was just to get the click metrics up, or taking the @ away entirely (in process) or rearranging or withholding tweets so it’s no longer a straight timeline, or messing up how images are posted (not that it’s ever been great, but they made it worse) only made it worse. And they just didn’t care, figured they were a monopoly.

Some people really have ‘no’ choice if your job involves publicity, but mine doesn’t so I left about a year ago, haven’t missed it except occasionally when I’d like to tweet someone a thank you, but it’s not worth it. The number of ex-Twitter users I know in my non-media sphere now outnumbers the Twitter users.

So yeah, if I worked there I’d feel like shit too (and would be long gone).

In the tiny hands of Trump or of his Russian handlers Twitter is a dangerous social engineering tool capable of disrupting the stock market, peddle lies, start wars, and brain wash low information voters. 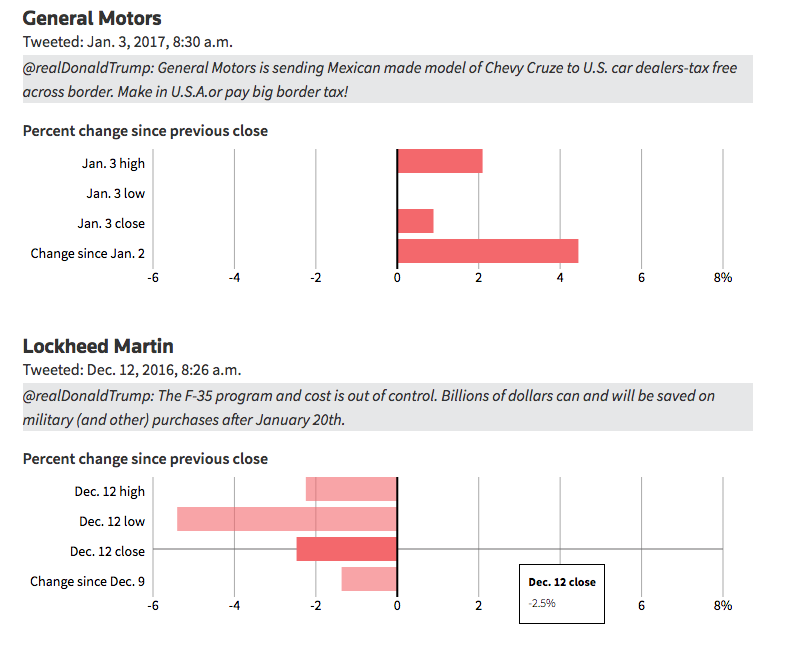 Share price performance for companies after Trump tweeted about them

Twitter is the place where people shill their books and music. Unless there is a little blue check mark next to your handle, it is not overly useful. Ello is a nicer and smarter venue for creators…

Verizon should buy Twitter, and hand it over to the Yahoo people. That’ll squish it good.

All the startups Yahoo bought in the last few years, and what happened to them

All the startups Yahoo bought in the last few years, and what happened to them

Some people really have ‘no’ choice if your job involves publicity,

I think Twitter is wildly overestimating its own influence.

The fact of the matter is that Twitter didn’t bring us Trump. Neither did fake-news, whatever that is, or Evil Russian Hackers™ or whatever reason you pick. It’s because people wanted to vote for him. They weren’t brainwashed. They weren’t simply evil and wanted the world to burn. They. Wanted. Donald. Trump. About sixty million of them, in fact. But for the grace of California, it would have been the popular majority, too, but that doesn’t matter 'cos that’s not how you pick your presidents.

There’s no silver bullet that makes these Trump voters not exist. Let alone a better block button on Twitter. If anything the block button helped. Oh, sure, it made Twitter more enjoyable, but it also gave us the media bubble and the spectacle of every major news outlet being catastrophically wrong about the election.

It’s because people wanted to vote for him.

You seem incurious as to why people wanted to vote for him.

Welcome to the unsocial media.

oh wait, and just put a bird on it.

I enjoy using Twitter; it is a neat way to chatter with friends and engage with authors, artists, and game designers I admire.

But I would have no regrets if it were shut down tomorrow because it would force Trump to actually engage with the press to get his message out.

In the hands of those who use it well, Twitter is a wonderful platform for ideas and the spread of news. Users like Patton Oswalt, Rachel Maddow, Stephen Fry, and many more make It worthwhile. And its ability to spread news quickly is unique – I’d argue that the flood of calls to Congress that shamed them into not shutting down the Ethics Office was due to Twitter anger.

Unfortunately, the same things that make it such a powerful social tool have easily been twisted by the alt-right, thanks to Twitter’s crappy oversight.

Awww come on man! You said it yourself: “flood of calls”. People took the time to pick a phone and actually communicate in whole sentences with their elected representatives after seeing the spectacle on the news. You can bet that the majority of these callers have never even seen a Twitter interface or even give a shit. Politicians on the other hand and their staff are the ones who have the perma-phone-to-face syndrome and are tuned into Twitter 24/7 because they are following every stupid thing Trump stamps out. “Twitter anger”? I don’t think so. ‘Twitter freakout’ on the part of hill staffers now that I do believe was real.

Yeah, that’s fine while Twitter doesn’t exist. While it does, you ‘need’ a Twitter presence, if not to actively engage and do customer service, then a) to prevent someone from pretending to be you, b) to know when there’s a huge shitstorm brewing on Twitter about you and try to defuse it. Journalists (or what passes for them now) are on Twitter and you should probably know what crazy lies disgruntled nutbags are feeding them and your other customers. Or to know that people are on to your crooked scam.