What's the best espresso machine under $650?

A Silvia with PID is a great machine. However I would add that anyone getting started in espresso should consider the grinder as your most important first purchase. Once you have a good grinder you can make respectable coffee with any machine. With a mediocre grinder even the best machine won’t make good coffee.

I’m fond of my rancilio rocky grinder in terms of value per dollar. But there are many other quality ones out there.

OR … you spend $30 on a Black & Decker coffee maker and give the other $620 to charity because your sensible & socially aware friends would disown you if they saw the 'Spresso-2000 on your counter.

I’ve used this Breville model for years and it is exceptional. Has a burr grinder attached and produces silky smooth espresso. 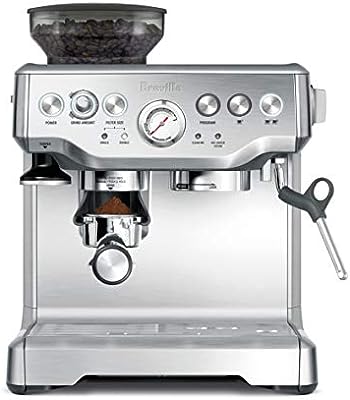 Shop Breville at the Amazon Coffee, Tea, & Espresso store. Free Shipping on eligible items. Everyday low prices, save up to 50%.

Alternatively, enjoy and appreciate nice things within your means because any “friend” who would disown you because of a coffee maker is free to go drink shitty coffee with the rest of the hair shirts.

I’ve had a De’Longhi Magnifica “super automatic” machine for about 15yrs and it’s been fantastic for me. It’s probably not in the same category as what someone who knows their espresso might expect, but I get consistent shots with good crema out of it without having to put a lot of effort or modding into it which is nice. The milk frothing comes out quite good for me, but I have not been able to figure out the magic of making art in your froth like the video guy did. Maybe that’s the machine, or maybe I’m just too darn lazy. 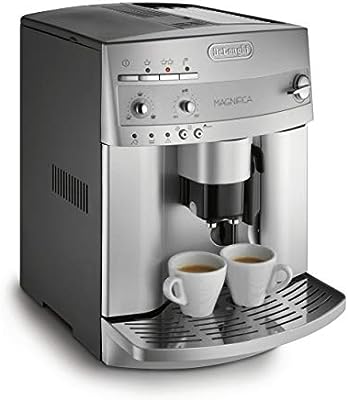 Shop De'Longhi at the Amazon Coffee, Tea, & Espresso store. Free Shipping on eligible items. Everyday low prices, save up to 50%.

The best machine is the one your friend or work has. The quality may vary, but the price is unbeatable. Especially for those of use that don’t drink coffee, much less espresso (y’all a bunch of pseudo meth heads smurfing for beans).

I spent like $30 for a Mr Coffee espresso machine a few years ago, and it’s worked just fine. (available at probably every box store near you, or shipped from walmart or amazon for free shipping most likely). If you spend $600 on a damn coffee machine, and you don’t make your living selling 100s of cups of the stuff to other people, then there’s something wrong with your financial sense.

I saved the cash and just go to SB when I feel like some espresso.

Spent it on a combo air fryer/pressure cooker from One Pot.

I went down this rabbit hole once. As @BradC says the grinder is the most important part, and the reasoning is interesting if I remember correctly: you need to pull that shot in some number of seconds (something like 20) or it’s either over or under extracted. The speed mostly has to do with your grind. So for a given batch of grounds you get that sweet spot for a few weeks, and it changes daily, and you adjust the grind to stay in the sweet spot. That means you’re constantly tuning things. Which is fine for someone pulling 100 espresso shots a day, but for someone who just wants a decent shot of espresso in the morning it isn’t fine…

I sold my old Ranchillo Sylvia with the PID mod and the $500 grinder on Craigslist for a surprising amount, and picked up one of these:

The Nespresso VertuoLine Evoluo Espresso Machine reinvents the way to make espresso and coffee at home. Incredible coffee in a single button operation

It has particularly obnoxious refill capsules at something like $1.10 each, but this refill kit works awesomely:

Amazon.com: My-Cap Sampler - Complete Solution to Make Your Own Capsules for...

Personally I think it makes way better espresso than I ever made with my $1200+ Ranchillo Sylvia setup, even with crappy preground coffee (I use lavazza Oro) but maybe I just wasn’t reading Coffee Geeks enough.

The math works out faster than you would think.

A bit more time at coffeegeek may have helped

(I kid) I use a nespresso at work now as well. It makes a pretty respectable coffee. Thanks for pointing out that refil system I’ll give that a try.

For home, with two young kids, I rarely have the time to keep using my manual espresso system so I went the other route and picked up a superautomatic Jura system that also foams the milk. Once I dialed it in I get a pretty consistent espresso only adjusting when I switch beans between roasters. They also work really well with lavaza and illy beans (oily and don’t go together)… They are not cheap systems but I found a Z8 for half off in a discount shop (Winners) once and it was mine!

The grinder I still use very regularly for pour over and French press so it was the better investment that way as well.

One day a plumbed in rocket with rotary pump will live on my counter. Maybe after I finish saving for the kids college

Or you know what truly great espresso tastes like, and want to make it at home. I thought people who spent up for espresso machines were nuts, too, until I tasted real espresso. I still think they’re a little crazy, but now I understand.

Came here for this. Not disappointed.

Hell. I spend $20 a week on chocolate milk for my wife (mocha latte) and kiddos (straight, with ice). and I consider that luxurious.

As an Italian I’ve used these “moka” coffee machines a lot since I was a kid, and frankly they’re not that good. The coffee is kept just a few centimeters above the flame which will make it overheat well before the water boils, ruining its flavour. A partial remedy consist in keeping the flame as low as possible, then turning it off before all water has evaporated. An electric stove might help too, although not having one I can’t confirm. In any case, results will be way inferior to a real espresso machine.

My favorite coffee machine is a lot cheaper than the ones above, although I’m sure they’re good as well. This one does its job since… uh… over 10 years, it’ s damn simple (no electronics!) and spare parts can be purchased cheaply online, although I didn’t have to repair anything beyond planned cleaning with anti-limescale (very hard water here) non toxic products.

I gather the fine silt after straining my cold brew, and then heat that up in the rice cooker.

I have had several machines over the past 30 years (when I fell into the rabbit-hole).

My last was a pro-sumer Pasquini Livia 90 which lasted almost 20 years and was an amazing espresso maker.

I tried to go “simple” for the next one as I don’t drink much espresso these days, but I do have the responsibility of making my wife’s morning latte every day. I went with the Breville Bambino (Sage in this video). This was about a year ago. I would not buy it again and here is why:

It still pulls decent shots. I bought the non-pressurized baskets. But I’m deeply dissatisfied with this product. Part of that may be because I was used to a pro-sumer machine that let me tweak things like timing, steam, and pressure more easily. But I was hoping for something my wife could use to make her latte when I’m away, and on that front, the Bambino has not delivered at all.

The emphasis on features over build is problematic, but also all those features add complexity that (in my case) has resulted in failure. And this complexity is for EVERYTHING the Bambino does. Want to clean? Pull out the manual and look at the arcane button-pushes for xx seconds that make that happen. Want to adjust the shot-volume? Pull out the manual… Everything needs the manual because NOTHING is intuitive or easy. I never had the need to read the manual for my last couple of machines because it was clear how to do something. The Bambino only has five buttons - a couple more buttons or indicators would do wonders to increase the simplicity this machine tries to sell itself on.

It’s only been a year and I’m looking for something else. The Silvia is a contender, but I might go up in price from there to get what I’m looking for. I have several other Breville appliances in my kitchen, and this is the only one I wouldn’t recommend. It’s just not built for longevity.

Definitely one of the best. I own this too and it’s superb. I expected this to make the list. I seriously this the barrista 870 is the best bang for the buck.

I used to have that machine too esam3500 it was great but I constantly had to clean out the frothing tubes. I make a lot of cappuccinos. Eventually the board fried. I replaced it with a cheaper manual breville 870 and I must say it’s a nice upgrade. Much hotter coffee and better crema. Keep it on your radar.