The Bicentennial Man sounded terrible but then the source wasn’t much cop either.

It worked well enough for a short story but I really was boggled at how it would make an interesting feature length film.

I’m not entirely sure any of them would have adapted well to film.

We may never know. No less than Harlan Ellison bent his considerable talent and extensive screenwriting experience to adapting I, Robot back in 1978 and even though the script is great and was popular enough to get published in book form in its own right, the eventual movie that came out a quarter century later bore almost no resemblance to Ellison’s screenplay, Asimov’s book, or a good movie.

I don’t know why they didn’t buy the rights to The Caves of Steel for that one. It’s (superficially, at least) a lot closer to what they made. Long in development at 20th Century Fox, plans are finally moving forward on The Caves of Steel movie, based on Isaac Asmiov's 1954 science fiction novel.

Counterpoint: shouldn’t a sufficiently talented crew with sufficient support be able to pull it off?

I can’t think of a single bad movie that could have been measurably improved by throwing more money, time, or talent at the crew. I can forgive a whole lot of shoestring-budget production-value-poverty. To my eye, bad movies are bad because of some combination of bad direction, bad acting, bad editing, or especially and most commonly, bad writing.

The Phantom Menace is a perfectly cromulent movie with the dialogue track muted. It only really falls apart when you hear what the characters are saying.

The Phantom Menace is a perfectly cromulent movie with the dialogue track muted. It only really falls apart when you hear what the characters are saying

Taking the dialogue out, way too much CGI killed it for me, beyond the “sets” also being CGI and the actors suffering for it. There was also the late Lucas trying to put too much into each scene, impressive as a tech demo but the details were all cacophonous.

The edited versions (sometimes available on YT, although not right now, it seems) are a definite improvement. Although still not good.

I also hear that the fanedits are superior but I’d have to watch to be sure…not sure if I have the patience beyond the Plinket tracks.

Although still not good.

It is hard to fix the ‘I really have no clue what to do with the plot’ that it suffered from.

way too much CGI killed it for me, beyond the “sets” also being CGI and the actors suffering for it.

That’s how I feel about Attack of the Clones. At least TPM was still shot on film. When Episode 2 went all-digital it freed Lucas up to get even more nuts with the CGI.

Weirdly, though, TFA has made me want to reconsider the prequels. (Very) Bad as they were, they were at least more ambitious than JJ Abrams’ film. 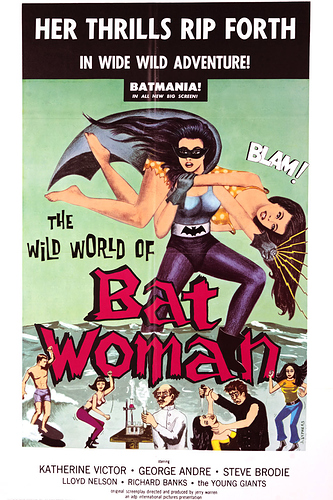 See, I can’t believe that was bad. That looks awesome.

On the other hand, I watched Independence Day: Resurrection this weekend.

A new vote for what might be the worst film I’ve ever seen:
Searchers of the Voodoo Mountain, which as far as I know can only be seen with Finnish subtitles, is not only a bad movie, it’s a boring-as-hell bad movie where nothing ever happens. As far as I can tell, the entire movie consists of a lot of angry looks, muttering, and shambling around a rocky terrain.

See, I can’t believe that was bad. That looks awesome.

Perhaps in the MST3K version, as long as you’re already intoxicated before the credits even roll. It’s weapons-grade horrible, something you’d use as a diabolical torture, so it fits the MST3K oeuvre.

It features the go-go ray, which makes policemen dance uncontrollably (of course!). And a plutonium powered hearing aid. And footage directly (and illegally) lifted from other films, newsreels and commercials.

I have just discovered that this movie was re-released, after Jerry Warren settled the copyright infringement lawsuits, as She Was a Hippy Vampire.

It is awesome! The writer/director/producer was offered big money by DC to not release it and won a court case over copyright for the name and released it. He would have made more money taking the buyout.

The director had said he never aspired to make anything of quality and his films stand by that.

This a movie with vision! Incoherent, drunken double vision… It is also quite fun.

On the other hand, I watched Independence Day: Resurrection this weekend.

I glanced over at my seatmate’s screen, the CGI artists were very talented.

Shame that everything else about it seemed wretched.

The Phantom Menace is of course awful.

But if you’re reconsidering it anyway, the “JarJar is the master Sith” theory makes it much, much better. And funnier. Make sure to watch the videos, which elucidate and exemplify the ideas quite well.

The Phantom Menace is of course awful.

ETA: The Phantom Menace is of course awful.

But is The Phantom Menace awful?

I don’t know what @moosemalloy really thinks, but The Phantom Menace is of course awful.

This topic was automatically closed after 275 days. New replies are no longer allowed.