This doesn’t seem like it would work that well at highway speeds. It looks like it would have a rougher ride than a pneumatic tire and much greater mechanical drag. It doesn’t look like it adds that much more traction than letting air out of the tires with a central inflation system.

The headline is click bait material and inflammatory for no reason.

As a retired soldier I would love to live in a world where all military personnel retire because no wars need to be fought ever again.

But that’s not reality @beschizza

The headline is click bait material and inflammatory for no reason.

Believe this to be Rob’s reference point:

DARPA is the future.

I hadn’t actually thought about a movie reference (though it’s more skeletal remains than corpses).

I don’t get how they are touting it as something that transitions from wheels to tracks. From the gif, they just change from round tracks to triangular tracks, and never operate as a wheel.

I’m sure most police departments in the US will be ordering a few.

The wheels rotate when they’re in the round shape (visible at about 2:21 in the video). When the tracks are activated to change the wheel shape to triangle is when the wheel stops spinning.

I’m surprised the Russian Army didn’t get there first out of sheer necessity.

Ahhh, Skynet will be most pleased!

I wish my country could be overly critical of how the military is used without veterans taking it personally. When I complain about oil wars and the authoritarian state, Im actually advocating for the safety of the troops.

But the zero dissent policy the military command relies upon is also used as a (patriotic) tool against citizens that are asking for our sons and daughters to not be unnecessarily shredded for the profit of others.

Oh, come on with that headline. Military vehicles are heavy enough that they have no problem driving over bodies as it is.

Oh, those clever scallywags at DARPA are at it again!

(I wonder if those adaptive wheels can be combined with ‘walkers’ a la the Wheelers of Oz.) 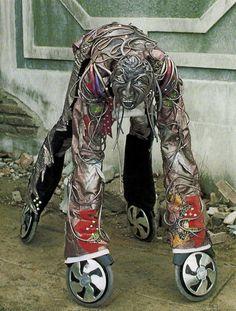 I’m sure these wheels will first be used on an upcoming duchebagmobile.

Exactly. Objecting to, or even protesting, military policy is in itself a patriotic activity. It should be perceived as carrying zero criticism of the soldiers and veterans themselves. If anything, it supports active duty military personnel who have no real outlet themselves for criticizing wars-for-profit or other really bad reasons to send young men and women to die in useless conflict.

Way ahead of you:

I hadn’t actually thought about a movie reference (though it’s more skeletal remains than corpses).

The T2 reference seemed obvious to me as soon as I read it. As another regular who appreciates your contributions, I’ll add to the perspective that I think you’re taking Rob’s pithy wordplay a little to seriously.

world where all military personnel retire because no wars need to be fought ever again.

But that’s not reality

Really? Which of these war zones are the ones that we need to continue fighting in right now American intervention in Libya, Yemeni Civil War, American-led intervention in Syria, Sinai Peninsula, Afghanistan, Kosovo, Jordan, Kyrgyzstan, Pakistan, Tajikistan, Uzbekistan, Philippines, Djibouti , Yemen, Somalia, The Federal Republic of Yugoslavia, Albania, The Adriatic Sea, The Lonian Sea – north of the 39th parallel, The Red Sea, The Gulf of Oman, The Gulf of Aden, Iraq, Kuwait, Saudi Arabia, Oman Bahrain, Qatar, and the United Arab Emirates.
Which of these war zones is it still ok to kill civilians and reporters?
I mean, you clearly think war is something the U.S. should be involved in and when we do involve ourselves we always kill civilians including women and children so I’d be interested to hear from a retired soldier that we need to keep killing people in those places and why we they are such a threat to the United States that we decided killing them is OK.

I’m sure that will work just fine in the desert.