Liking offworld so far!! No mention of Woodcutters From Fiery Ships though?

I’m always on the lookout for more games that reference or draw inspiration from Twin Peaks. Here’s a quick (and probably not comprehensive) list of games I’ve played where a TP reference jumped out at me:

Silent Hill 2 (box of left shoes in a hotel room, among other things)
Fez (a room designed to work like the black lodge, which was pretty ingenious, and the owls, of course)
Superbrothers: Sword and Sworcery (“Sometimes the owls are not what they seem, and sometimes they’re just owls.”)
Alan Wake (Too many to count. They were all over the place!)
The Legend of Zelda: Link’s Awakening (cited as a direct inspiration, entering a dream world, owls as guides, dopplegangers for other Nintendo characters, etc.)

Which game is that one pictured with the LucasArts-style interface? I want to play it!

Looks like this chap Scaife does 'em, got some others too, including Buffy. My oh my.

Today seems like a good day to preview this picture from a book of pixel art I'm working on. #TwinPeaks http://t.co/tLQsLGHxcX 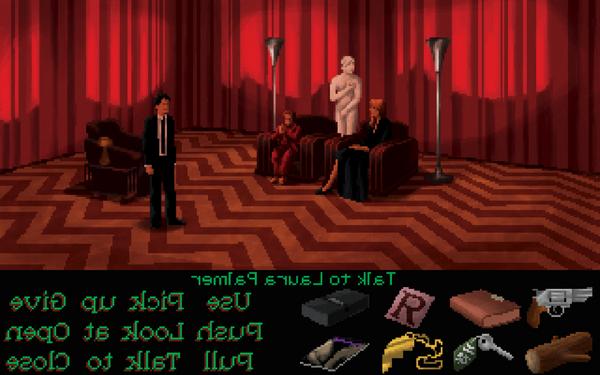 How could you possibly forget the most confusing twin peaks inspired indie game of them all, Deadly Premonition? Sure, it might not be as pixelarty as these others, but a game so weird getting snubbed on this list just breaks my heart. If https://www.youtube.com/watch?v=rp5krDoflLI doesn’t blow your noggin for how freakin’ weird this is, I don’t know what to say.

Jonathan Burroughs says that games are “particularly suited to ambiguous, interpretive or highly visual storytelling”. Why is this? I’m not denying that this is the case, but I was hoping someone could elaborate/explain.

All I can come up with is that as games put you as the participator in the action, not just the audience, you more directly feel what the character feels, and emotions can be evoked using a combination of gameplay and aesthetics (e.g. feeling hardship when your character climbs really slowly up the snowy part of the mountain in Journey, which is combined with music of a struggle and deep snow/heavy blizzard).

Ambiguous and interpretive — maybe because the player’s experience is less linear than that of the viewer of a movie. A movie’s narrative can jump around in time and place, but the fact that one shot was shown after the other is unambiguous. Whereas in games, one player’s experience can be different than another’s depending on his choices.

Highly visual — because the writing in video games usually sucks.