the quote was: “White people to become minority by the year XXXX,” as if that wasn’t a fucking improvement.”

It sure parses like “the fewer white people the better”. If I said, “Latinos to replace Blacks as primary minority in America - what an improvement” (which I’m not saying), you see how that doesn’t parse so well. 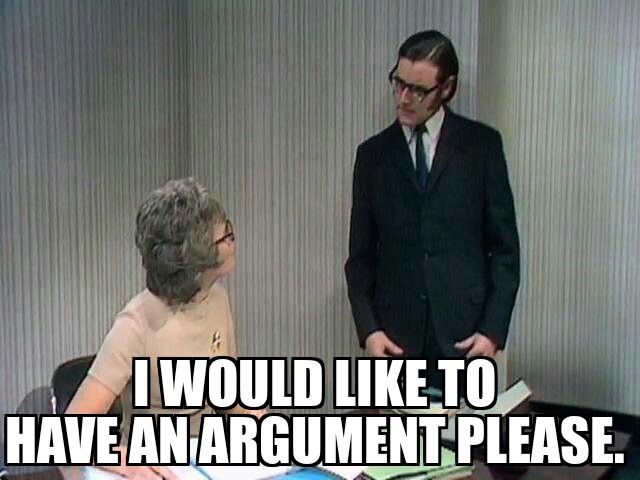 It sure parses like “the fewer white people the better”.

White folks being in the 'dominant majority" has led us to the state of chaos which we currently find ourselves immersed; so maybe it’s time to ‘give up the wheel’ for a little while and let someone else “drive.”

Is this the questions thread?

Will we ever have as much fun here again? And which one?

Are you saying white people in general have a good track record on these things?

If not, what’s so horrible about the thought of them no longer having majority rule, given their general complacency (at best) about the ongoing effects of white supremacy and all that shite? It’s not like anyone here is shouting “Kill Whitey!”

Courting Mexican and South American immigrants who are largely Catholic should have been easy. But their racism just couldn’t handle it.

Eh, YMMV there. On certain social issues like LGBTQ rights and abortion they’d probably find a reasonable amount of traction, but when it comes to things like social welfare, Catholics, at least the ones following the rules, should be far more in favor than the average GOPer. Admonishing the poor tends not to go over as well among Latinos, and Catholics overall.

The GOP only decided it trusted Catholics after they were able to convert considerable numbers of them into single-issue anti-abortion voters. It wasn’t all that long ago that JFK was totally going to command that all the Catholics take up arms against the US using weapons stockpiled in church basements in order to hand the country over to Papal rule, after all.

I’m interested in what you mean by “ineffective” and how it is being measured.

Not speaking for @harveyparadox - only for myself.

I’ve never, ever made a positive change in anyone’s attitude, behavior, or voting by starting out with an explicit condemnation of their entire ethnic, racial or social group. In every case I have observed, that does not work.

It seems to me that whenever someone adopts the language patterns of the racist right, language that explicitly calls out unchosen characteristics like skin color or ethnicity instead of illuminating chosen behaviors like lending practices or social structure, the memes of the racist right that implicitly support skin-color determinism are being openly supported and propelled. And when you fight on the enemy’s chosen ground you lose.

My opinion, based on a great deal of real life empirical observation and personal action.

the quote was: “White people to become minority by the year XXXX,” as if that wasn’t a fucking improvement.”

It sure parses like “the fewer white people the better”.

An interesting experiment would be to tease out the underlying assumptions you make that allow you to parse it this way.
Being charitable I would say that you may be looking at this from a glass half empty perspective while others may see the glass is half full. I don’t think that changing the ratio of arbitrary differentiation that makes up a society is inherently bad.
You might be thinking that changing that ratio must entail doing away with a segment of the population but there are many other ways for it to change.

Cory knows his audience. We’re generally not the sort to jump in with #notallwhitepeople.

If some white person gets his fee fees hurt by anything here, there’s no convincing them anyway that the headline and other such statements aren’t about ALL white people.

I’m white, male, and not feeling threatened by the equality of others.

I recommend the comments section on Breitbart where these types of stories have been posted.

The amount of whining and white tears is delicious. Amazingly, some people, somehow, blame “The Jews”.

I’ve never, ever made a positive change in anyone’s attitude, behavior, or voting by starting out with an explicit condemnation of their entire ethnic, racial or social group. In every case I have observed, that does not work.

This is why I was asking for some clarity. I agree the headline is ineffective at shifting the position of people who aren’t already sympathetic to the idea the headline is presenting. But I also don’t think that’s the point of the story. I think people have moved on from that.

The president recently referred to Democrats as his “enemy”. He’s called the media an enemy of the American people. The state of Michigan voted for the Poison Our Neighbours’ Water party in the last election. They talk about cutting off federal funding to California over “sanctuary cities” (that is, funding that is coming in very large part from California). I think the civil war is already on.

i don’t know what the way forward is for America. But the idea that it is time to stop trying to engage with racist authoritarians and start getting ready to protect yourself from them is one that has to make a lot of sense to a lot of people. This story might be perfectly effective depending on what effect is desired.

But the idea that it is time to stop trying to engage with racist authoritarians and start getting ready to protect yourself from them is one that has to make a lot of sense to a lot of people.

Yeah, I am seeing people expressing that more and more. It’s unfortunate and self destructive, in my view; I’m like “why can’t we do both?”

Minority viewpoints win out by becoming majority viewpoints. There’s only two ways to achieve that process; either by changing the way people think, or by significant loss of life.

That being the case, I try not to argue in favor of my enemies’ viewpoints, or sponsor my enemies’ rhetorical tactics.

To be fair (which they don’t deserve), GW Bush made an attempt. But there were too many legislators and voters who placed more importance on their racism than on their long-term strategy.

To be fair (which they don’t deserve), GW Bush made an attempt.

I was actually impressed by one speech in which GWB described slavery as our nation’s life-threatening “birth defect” that necessitated the painful surgical correction of the Civil War. If Obama had used such inflammatory language conservatives would have lost it. (I mean, they did anyway but you know what I’m saying). 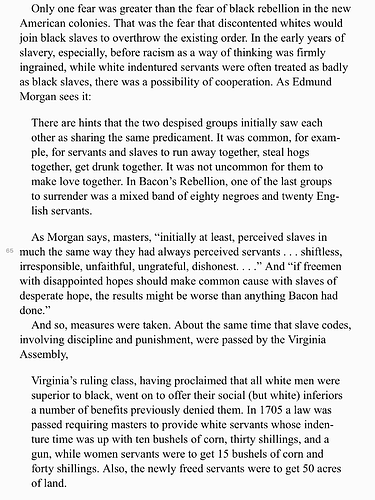 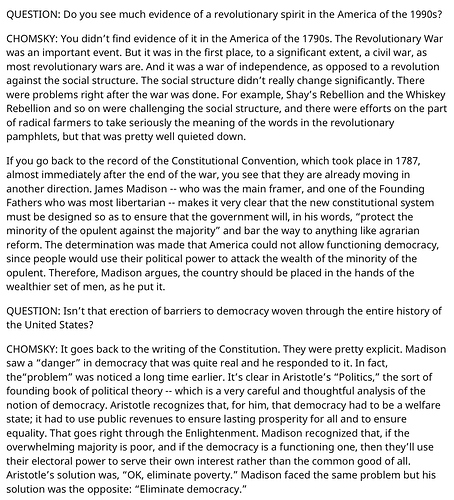 The founding fathers had two core concerns that were fundamental to shaping the country.

As glibertarians were fond of asserting during the Bush years, the USA has never been a democracy (“it’s a republic”). It was designed that way.

It doesn’t come off (to me at least) as “how happy that there will be no majorities and all will have to live together in harmony”.

Well, when white people generally just keep going along with white supremacy and its legacy, instead of fighting something that’s their fucking problem in the first place, others often do find that pretty fucking exasperating.

PS–Tone policing isn’t going to get you anywhere it. Do it all that much and it’ll just get you out of here.

And what are you proposing? “Colored folks” (see how that works) will not be a unified majority. White folks will still be the largest group, followed by brown folks, then black folks, and then yellow folks.

Now, can we go back to using socially acceptable language? That was a very uncomfortable point to make.

I’m Biracial, and that’s how I talk; attempts to tone police my personal vernacular are utterly pointless. You don’t get to police how others communicate in this forum, as long as it falls within the parameters of the code of conduct.

That was a very uncomfortable point to make.

Frankly, I really couldn’t care less about your personal level of comfort; that too is a huge part of the problem - unpleasant topics hurt the feelings of the people who need to have such important conversations the most, so they often try to gloss over the actual issues at hand.

Using “acceptable” sugar-coated terms and wearing rose-colored glasses has never solved a single problem concerning the artificial construct of race or class inequality, and it’s unlikely they ever will.

Now, can we go back to using socially acceptable language? That was a very uncomfortable point to make.

Sometimes we need to have uncomfortable conversations and grapple with uncomfortable truths. That’s how we grow, learn, and gain empathy. Unfortunately, by being the dominant power group in most of the world for so long, white people have been able to insulate ourselves from discomfort.

You’re right. It is uncomfortable. But discomfort really is survivable. But telling a black person¹ “you called me white and that makes me uncomfortable” is like saying “I have indigestion. Can’t you see how uncomfortable I am?” to someone with a case of acute appendicitis.

¹ Because that is precisely what you did.