Why does Japan love giant robots so much?

according the the box office, they don’t love giant robots all that much.

The question should be “why doesn’t everyone else love giant robots as much as the Japanese?”

I was delighted when Star Fleet (X-Bomber) was finally released on DVD as was just as good as I remembered.

It’s more than just giant robots. Japanese society seems to like proxy battles in general. Think about things like Pokemon or the various card-monster-battle games and video series. The characters don’t ever participate in direct conflict, it is always through proxies such as robots, exoskeletons, mystical beasts invoke from balls or cards.

What? I don’t understand. Why the hell wouldn’t they?

The question should be “why doesn’t everyone else love giant robots as much as the Japanese?”

Oh. My. God. Why was I never made aware of this? It is like the freebase version of Jerry Andersen. ROBOT PUPPET BATTLES! I know a six-year-old is gonna be watching the hell outta this as soon as he’s informed of it tomorrow.

I guess only Biotron falls under the description of “giant robot,” but I believe that Micronauts may have been the coolest line of toys ever made.

I bet one of y’all can answer me this. I remember watching a film on cable about 30 years ago, about a giant robot piloted by a person inside. The guy held a couple of cables and would pull on them to throw punches, etc. It had been dubbed into English, and some of the action took place on one of the moons of a large planet (Saturn or Neptune). It may have been Mazinger Z (based on the little bit I just read about that). This was before I knew what anime was, but I suspected it was from Japan because the drawing style resembled Speed Racer, Battle of the Planets and Star Blazers. I bet someone else saw this on cable the same time that I did.

That appears to be due to extremely poor advertising, possibly fueled by studio politics.

I want Hawkwind to cover it.

Thanks, could be… I see they also edited those episodes into a movie called Starbirds.

The upshot: it’s all about the toys.

Might be. My kid loved every kind of robot until he was about 8, and then the Bionicles started collecting dust. He was watching Evangelion recently, but I think he was more interested in the boobs than the mechas. Damn I spent some money on those Bionicles.

Yeah, I believe Hero Factory replaced Bionicle. Cool stuff, though my kids don’t seem to want anything to do with it.

While the inner teenager loves giant robots, the outer educated adult cringes at the fact they will never exist.

Much like trying to carry a jaeger with a helicopter: 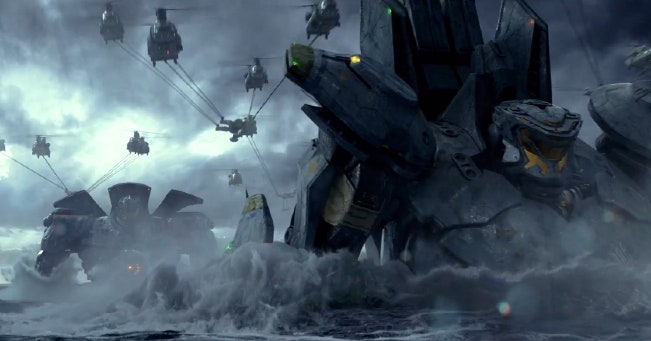 How Would You Carry a Jaeger From Pacific Rim?

He was watching Evangelion recently, but I think he was more interested in the boobs than the mechas. Damn I spent some money on those Bionicles.

Strap some tits on them.