“If anything on this graphic causes confusion, ignore the entire product”

Nah, it’s totally intuitive. Let’s pick Orlando for example, and it will clearly receive gummy worms in all basic colors, with a 25% chance of fruit loops.

I’m a Brit and I’ve visited Florida about 9 or 10 times over the years, being hit by 2 hurricanes (Francis and Irma, both times the eye ended up passing right over us and we had to be moved to a different villa after Francis cause it tore up the roof) and the predicted path infographics were very obvious and readable by all in our family.

half of the population are stupider than the average

Except in Lake Woebegone.

Sigh. Please don’t treat this stuff as an opportunity to show off your graph reading expertise. The fact that you personally think the map is really obvious isn’t relevant here.

Trying to make a good map is a tricky problem, because in general the display of spatial uncertainty is difficult. What you have here is uncertainty in the future position of the hurricane’s eye, but also that the hurricane’s damage potential spreads out in an unclear way from the eye itself.

IMO the correct way is really to suppress the eye-position graph completely and do a weather warning map like the UK met office does. This map would combine the likelihood of damage with the potential scale of damage. 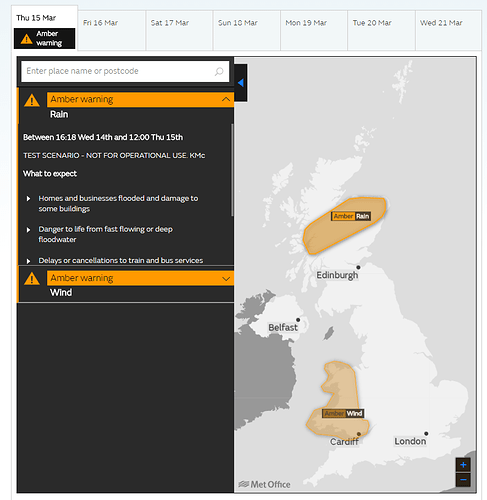 The general public cares about the impact prediction, not where the eye of the storm is. 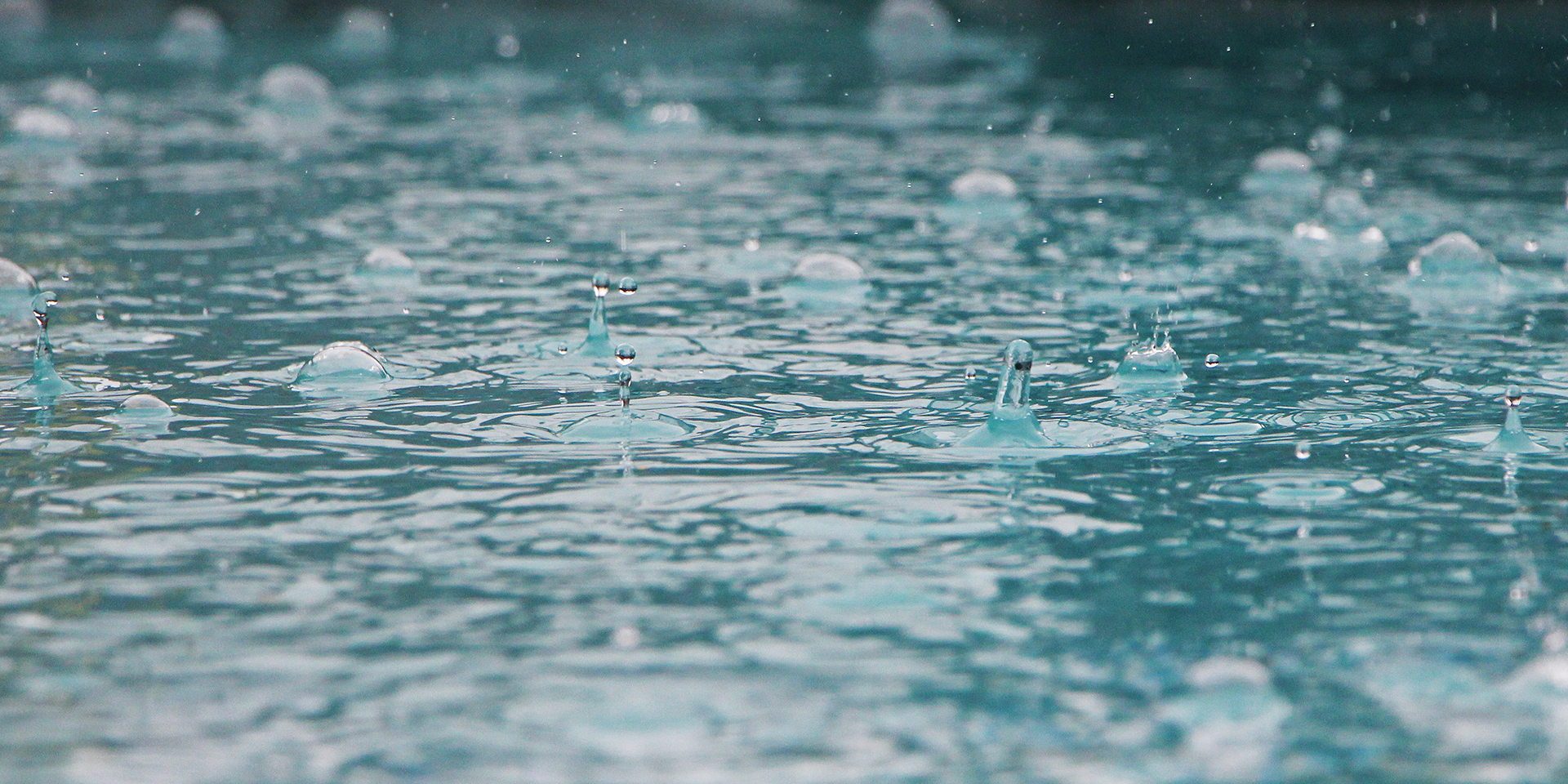 A guide to the National Severe Weather Warning Service

While I was aware that the expanding cone indicates some kind of probability and that the borders do not indicate a safe zone, I considered it to be some kind of reasonably safe zone. That it is supposed to show where the freaking center could be didn’t occur to me and that has to do with the design.

Reason one: the point of the map should be to show where it’s likely to be dangerous. It doesn’t show that, when the red area merely shows the most dangerous part.

Two: the cone widens right at the start. While this might imply a high probability early on, it looks far more like an area in itself.

Three: there’s a path right in the middle. Which looks pretty definite. And if that’s supposed to be the most likely path it still counterintuitive towards the cone itself. Implies a false sense of exactness where there’s none.

When the ‘shuffle’ option came out on iPhones, people said it couldn’t be random b/c it payed the same song twice in a row!

I find it far more likely that people complained about it playing the same song twice in a row, which is kind of understandable. When you shuffle a deck of cards, you don’t get one card twice when you hand them out. And I bet that most people would expect this behaviour from a shuffle function.

Also, didn’t iPhones start with this right from the start? Shuffling predates iPhones by at least two years, my iPod shuffle came with that option.

(Hardly used it, as is mostly used it to listen to audio plays and audiobooks).

In reality, the cone is a series of circles that predict where the center of the hurricane might be as it travels; the circles get bigger because uncertainty increases as time goes on.
,

Not even that. There are two uncertainties here: the path the storm takes and how quickly it moves. They are rarely identical, but the these maps shows a perfectly circular area of uncertainty as if they were. The maps people have shown above give a much better idea of the likely extant of damaging winds or uncertainty of the storm track. (by showing multiple predicted storm tracks.

@boingboing (because “Clive Thompson” does not seem to be @-able and nor does “BB Contributor”) will someone please correct “databiz” to “data visualisation” in this article?

(And as a follow-up, surely anyone providing articles ought to at least have a handle here? Or have I misconstrued?)

ETA and @deedub also the importance of using proper terms rather than lazy and uncommonly used abbreviations.

I’m going to be an ahole here and say that what this study shows is that there will always be a percentage of people who don’t get it. But if you got a better idea, let’s see it.

I think that it’s making it personal by any means necessary. Storm’s a coming, you look at your phone, turn on geo location and something like the Weather Channel’s storm surge vis (See below) pops up on your screen using Google Street Maps or 3D map to show your house under water and flashing infographics showing you an exit route, shelter locations, and gas stations with supply and or power. Oh, and a big red flashing “GET OUT NOW!” or “SIT TIGHT AND WATCH THE GAME”.

If you don’t get it by then well, it’s your own damn fault. Swim.

An amazing infographic from (gasp) The Weather Channel: Really good use of game tech.

The solution for utter nitwits isn’t a better graph, it’s reading the graph for them and telling them to get out.

Or, to put it another way, it is not the chart that is the problem, it is the labelling. Label should say “Anyone in or near the red area should be making urgent preparations and listening to local authorities for evacuation instructions”

ETA and @kmoser and T F M they must R needs to be in plainer and simpler English!

The idea that you “prepare for” individual hurricanes is kind of flawed anyway.

If you live in a hurricane target zone (I did, the eye of Hurricane Andrew passed about 25 mi south of me), you prepare for hurricane season, not for a given storm… Around the first of July, make sure you’ve got food, water, batteries, and that your shutters work properly. Have a bugout bag ready.

And that’s about it until the outer winds are ~24 hours away, when you decide to button down the shutters or not, and whether to stay or go.

If I were inside the gigantic “cone” of a storm which was 4-6 days out, I would do about it pretty much exactly nothing.

There were people who never understood the threat level graph thrown together after 911.

the threat level graph thrown together after 911

Not a USian and not sure what you mean. A quick Google gave me the thing below - is that what you mean? Hardly a graph, but if anyone cannot understand that, the issue is not stupidity it is literacy (and possibly colour-blindness). 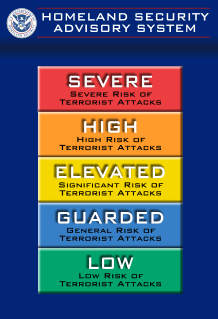 You know what. For all the talk of stupid people not understanding the chart, the New York Times (and other orgs) don’t make things any easier by releasing charts like this this morning: 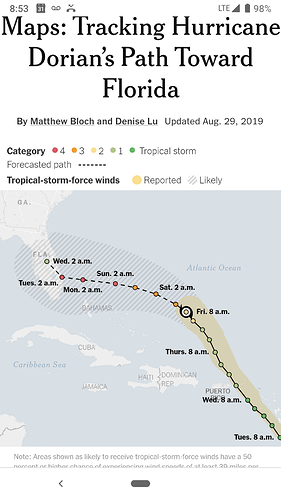 How are you going to explain to the man in the street that this chart represents a “cone of probabilities” or “thousands of simulations” when this is representing past, actual, non-probabalistic data as fitting in that same cone?

Bad luck on your choice of dates! I got to deal with Charley, Frances and Jeanne in 2004. Florida in August/September is a miserable place. Temps in the 90’s /mid 30’s with 100% humidity, thunderstorms every afternoon with the chance of a nasty Cape Verde Hurricane every two weeks.

We love our Tourists, but what on earth prompts you Brits to come here in our worst weather months? I guess that old saying about mad dogs and Englishman exists for a reason though…

Have a bugout bag ready.

There were people who never understood the threat level graph thrown together after 911.

Please explain to me what that nonsense graph meant besides W. Bush’s government wanting to twiddle the knob on public anxiety like the volume on an old TV. The fact it didn’t correspond to anything meaningful made it very easy to never understand.

Just because a piece of information is simple in presentation doesn’t mean it’s good information that only a fool would be confused by. I could make a very simple graph color coding a “panic about mayonnaise” scale from low to severe and I’m gonna guess it’d still be read as confusing and surreal!

Just because a piece of information is simple in presentation doesn’t mean it’s good information that only a fool would be confused by.

That’s the point I was making above in regards to gaming simulation. By presenting something closer to reality perhaps people could relate better to the complex forecast information presented to them.

Situational awareness needs to be spoon fed to the masses in more creative ways. Graphs and charts require thought and understanding. You show or simulate a person’s house under water and they will get it.

I am a native of southeast Louisiana and survivor of several. Anyone in any part of that cone and residing in a coastal area - especially New Orleans - should prepare to evacuate.