Mixed feeling for me.

One, that guy does nothing for me. Possibly because I just yesterday watched Maverick after hearing how fucking great it was and had the same reaction as I had to the original, ie: “wtf does everyone see in this stupid, insipid, impossible, so-macho-it’s-totally-gay military propaganda movie?” So I’m biased, he might be a fantastic actor, but he’s not how I picture Case. Case is seasoned, he’s been through some shit before the story starts. This guy looks too fresh.

Second, I think Neuromancer is a perfect novel for a movie adaptation, but I’m wary of it being milked out into a 9 hour season, or more, of cliffhanger TV episodes.

After the flavor-heavy but plot-light letdown of “Cowboy Bebop”, I’m wary of this adaptation. Hopefully it will turn out okay. In the meantime, I can still amuse myself with the audiobook as read by the author.

I’ve avoided Apple+ so far. This is tempting, though… 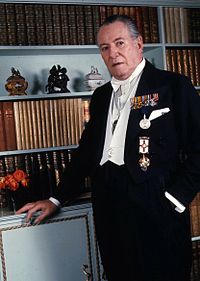 Dennis Yeats Wheatley (8 January 1897 – 10 November 1977) was a British writer whose prolific output of thrillers and occult novels made him one of the world's best-selling authors from the 1930s through the 1960s. His Gregory Sallust series was one of the main inspirations for Ian Fleming's James Bond stories. Wheatley was born at 10 Raleigh Gardens, Brixton Hill, London to Albert David and Florence Elizabeth Harriet (Baker) Wheatley. He was the eldest of three children in the family, which o...

After Foundation, is anyone really still thinking that the word “adaptation” has any meaning at all to anyone at Apple TV?

Foundation is not entirely without redeeming qualities, but being an adaptation is not one of them.

It’s a bit dated by now.

Neuromancer (and cyberpunk in general) was long considered to be unfilmable. Gibson wrote Johnny Mnemonic specifically to be “filmable” cyberpunk and, well, we all know how that turned out. Then again, they said Dune was unfilmable too, so I’m cautiously optimistic.

I just started watching the adaptation of The Peripheral (so far so good), and it occurred to me that you really couldn’t do a faithful adaptation of Neuromancer without making it self-consciously retrofuturistic. Our stub has already diverged from that timeline.

Johnny Mnemonic way ok, it just lacked (as usual for Hollywood) more attention in the script, and a better director. I was all for Longo directing it at the time (me being an art school student and a sci-fi nerd), but he really fumbled some basic movie-making shit with that one. Then again, it was severely cut by the studio, so who knows what the original film was like.

And I love ya, Rollins, but you sucked in this (Kitano and Lundgren were great in it, though)

you really couldn’t do a faithful adaptation of Neuromancer without making it self-consciously retrofuturistic.

On top of that, it could end up looking like an imitation of Blade Runner, Akira, Ghost in the Shell, the Matrix films and anything else that is cyberpunk, cyperpunk-influenced or cyberpunk-adjacent.

…Ready Player One, Lawnmower Man, Johnny Mnemonic, Strange Days…
And of all those mentioned above, only Blade Runner, Akira, the first Matrix and Strange Days are worth a rewatch. I agree that Blue Ant, or maybe the San Francisco trilogy would be a better source for a multi-season project.

I"d be very interested in a multi-season project that went beyond Neuromancer into Count Zero etc. It would have to be done well. That may be possible, but much will depend on the first couple of episodes.

Thus far I’ve been enjoying The Peripheral. Where it departs from the book(s) it is understandable in the transition between media.

I’ve avoided Apple+ so far. This is tempting, though

Come for the Neuromancer, but stay for the Severance.

Based on how “well” AppleTV+ captured the heart of Foundation in their adaptation, I’m expecting their Neuromancer adaptation to be a sitcom, complete with laugh track and the occasional song and dance number.

Even with a TV series, there has to be extensive editing of the source material, as with The Peripheral, unless it’s going to be three epic movies, like LOTR, or an ongoing multi-episodic multi-series thing like GoT.
Dunno, I’m sort of hopeful, that if enough money is put into it, and the right cast is brought in, and the script and screenplay are well done, this could be good. I bought the book when it was first published, and I’ve got everything that Gibson has written, even met him twice , but as someone has said, the distopian thing has already been done brilliantly in Blade Runner, and then there are two more books in the Sprawl series.
I like the Bridge series very much, and maybe that would be a better series for a long-term adaptation, or even better, the Blue Ant series, which I absolutely love, it it has a particular appeal to me, the whole clothing design/mall ninja thing fascinates me.
I’m hoping The Periferal is successful enough to allow Agency to be adapted. Then it’s the wait for whatever book three is called…

If I don’t watch it, they cant ruin it for me. It’s an airtight plan.