Woman sues cops because they destroyed her empty house, thinking a shoplifter was hiding in it

I’ve been saying the same for ages.

One is tempted to consider the old tag line that seems to follow so many police interactions when reported on the news-- “Alcohol may have been a factor…” Because its really hard to think of what else could have led to such bufoonery, even by the Keystone Kops of Caldwell

This raid wasn’t carried out by two cops in a squad car going overboard. It involved tactical gear, including an armored personnel carrier. Someone in the PD had to call in the SWAT team, and the SWAT team leader directed the activities. None of those people were sane enough to think “hey, maybe we shouldn’t destroy this house, just because we think a suspected shoplifter might be inside. BTW - did anyone get a warrant?”

Nope, no warrant. Permission from the occupant to use the (helpfully provided) keys to walk in and arrest the suspect if present; but no warrant.

If the house had been white they might have found some other solution than killing it.

Yes, I want to see police forces everywhere act like well regulated militias when it comes to weapons handling.

her ex-boyfriend, suspected of shoplifting

Huh? Where the heck is that coming from? TFA says:

police had a warrant for Salinas, who was wanted for assaulting a police officer and other crimes

Are you confusing this with the two non-related stories TechDirt mentions, one of which involved shoplifting?

“Bloody typical. They’ve gone back to metric without telling us.”

One of my favorite films of all time. It matches my sensibilities perfectly. Surrounded by the banal, bureaucratic, and often incompetent evil of an authoritarian regime, the whole thing hinges on a simple mistake which cannot be undone or resolved. It mixes Kafka with the absurdity of totalitarianism.

I didn’t know until after I had seen it a number of times, that the famous Form 27B/6 in the film refers to the apartment number of George Orwell in London. It’s a nice touch.

I’ve got it? That’s exactly what it was, the Keystone Kops chasing Charlie Chaplin! Seriously, kops falling through the ceiling, kops blundering through doors they have the key to, putting their heads through windows they didn’t see the glass in, it practically writers itself, pure Mack Sennett.

Its a bit of a worry if they do that much damage and don’t kill everything inside the house.

Christ on a bike. When a scene from a movie intended to evoke the nightmare of a dystopian totalitarian government is indistinguishable from how American SWAT teams regularly behave, something is wrong. Actually, I take that back - it’s not indistinguishable. The government doesn’t repair the holes afterwards in the real world, of course.

Surrounded by the banal, bureaucratic, and often incompetent evil of an authoritarian regime, the whole thing hinges on a simple mistake which cannot be undone or resolved.

It’s too disturbingly close to actual events in the US, too. I recollect the story of someone who escaped from prison. They picked up someone with a similar name who was mentally challenged. His public defender encouraged him to not challenge anything so he could “go back” to prison and get his sentence over with more quickly. So off he went, unable to understand what was going on, where he spent a significant amount of time in prison being brutalized. (I think he only got out because they finally caught the real escapee, and he was taking his place in prison.) Or the time the Ferguson police accidentally picked up the wrong guy, abused and beat him, and then realizing their mistake, charged him with bleeding on their uniforms. We may not live in a dystopian authoritarian regime, but the criminal justice system often looks that way (if you’re black).

“Alcohol may have been a factor…”

In this case, I think they were drunk with power…

Its a bit of a worry if they do that much damage and don’t kill everything inside the house.

The positive side of police incompetence!

Well this gives new meaning to "search and destroy

Actually it doesn’t. Search and destroy is a military term that describes an action taken by a military unit, on a enemy. Though horrible, it is sometimes necessary in the field of war.The problem is our domestic police forces today believe they are military forces, and there lies the problem.

Actually it doesn’t. Search and destroy is a military term that describes an action taken by a military unit, on a enemy. Though horrible, it is sometimes necessary in the field of war.The problem is our domestic police forces today believe they are military forces, and there lies the problem.

Exactly. They did a search and destroy action as if they were an occupying army with zero investment in/responsibility towards the local civilian populace.

But if you did call in the military, they would do exactly what we see here: shoot the place up. Because calling the military carries an implied instruction to do serious damage. Similarly, by calling in a SWAT team, there is an implied request to do nasty things to the target. Thats what they are for, after all. When a case is handed off between agencies, I would expect there to be some formal documentation changing hands and it wouldn’t surprise me if there are boxes to be checked under reason for handing off to this agency but I doubt there is an option for householder doesn’t know where the guy is but said we can look around if we want.

Similarly in the case of Jean Charles de Menezes there was a handover of control to a Specialist Firearms Command. Now without some really precise instructions to go along with the handover, the name of that unit implies that somebody needs to be killed. 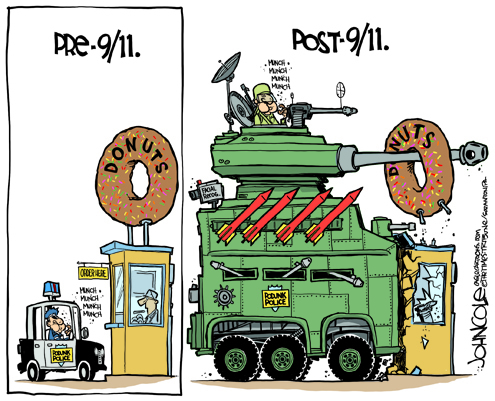 If they do this searching a house perhaps you will understand why I don’t let the police search my car.

The entire Bin Laden family could be in there.