Women take a place at the pinball table 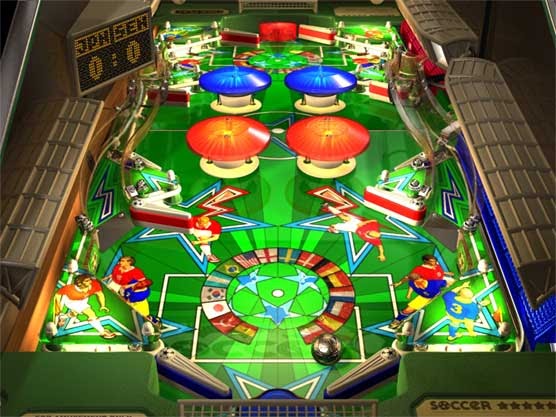 The Erotism of Playing Pinball (in the words of Umberto Eco)

All about books and cultural readings

Thank you! I read the piece and half-remembered the “you play pinball with your groin” reference but couldn’t remember where I read it. This is stil my favourite Eco - the escalating, feverish obsession with conspiracies and the always-Eco diversions: “I was trying to explain something wonderfully clever to you when I was distracted by I wonderfully clever I am. Ooh, look! An enlightenment squirrel! Which reminds me of the Passion of Saint Ungulate…”

All of the best pinball players I know are women, for what it’s worth.

I’ve only meet one person who could beat me, but fortunately he couldn’t smell me writing my name under his high score.

So much about this is fantastic I don’t know where to begin, so I’ll just say Medieval Madness is one of my favorites. “I’m Sir Howard Hurtz! Lord how it hurts!” Hilarious.

This also reminds me that my Wii pinball game is a poor substitute for the real thing in so many ways. Nothing could be better than playing pinball in the sort of supportive atmosphere created by Belles and Chimes.

Tommy - the only pinball player who mattered.

I’ve found the closest thing to playing actual pinball is the terrific app/game Pinball Arcade, which is on just about any platform you can think of. Its recreation of Medieval Madness is lots of fun.

It’s actually pretty funny, I’d heard the physics on Pinball Arcade are not quite as realistic as they could be, as their playtesters reported the “random” reactions as bugs. So they were toned back to be slightly more consistent.

Yep, their physics is very good. I will note that, as with all touchscreen platforms, there is noticeable lag between triggering the flippers and the action happening on the screen. Games played w/ a keyboard have a response closer to real machines. You just have to spend a little time recalibrating your timing.

The article claims that Stern is the only remaining pinball Manufacturer. This is not true. Jersey Jack has been making The Wizard of Oz pinball machine for a couple of years now, and has been testing The Hobbit (though it hasn’t shipped to customers yet) for the last year.

Well, they’re not wholly wrong either. Stern’s the only remaining manufacturer of the old pin makers, but at the same time JJ has cropped up as an “indie” manufacturer.

That deaf, dumb and blind kid?

He sure plays a mean pinball.

Listening to you I get the music.
Gazing at you I get the heat.
Following you I climb the mountain.
I get excitement at your feet.

All of the best pinball players I know are women, for what it’s worth.

Keepers! Every one of them.

Man, one of these days, I’ll break the screen of my smartphone because of Pinball Arcade ! My own dream pinball would be a blend of Xenon, Black Hole, Centaur, with the maze-like ball lock mechanism from Flight 2000.

Sexism is alive and well in pinball. Recently the owner of Pinside, probably the largest pinball forum online, had to step in and declare a moratorium on sexist language after one of the most visible female players quit the site in frustration.

The following thread was dripping with sexist nonsense and talk about “our freedoms!”, plus tons of pictures of half-naked women. It really was a cesspool. The 99% male demographic of pinball is so insular that they genuinely don’t see an issue with the way they behave around women and say that women should “just toughen up” if they “want to hang out with the boys.”

How about you boys grow up into men and treat women like people instead of sex objects?

Pinball is such a niche hobby as it is, the last thing we need is to alienate more people.