The flight spends as much time on the runway taking off and landing as it does in the air between the islands.

I was on a flight from Madison to Chicago that spent more time taxiing around O’Hare than in the air.

Or a zip line…

There is a boat as well, but in that part of the world a boat might be more vulnerable to bad weather.

They are considering building a bridge.

Efficient doesn’t really come into it when talking about living in the Orkneys.

There’s also a ferry but it takes upwards of an hour and appears to only run once or twice a week.

Wiki says there are 13 car ferries per day, on a slightly longer route.

The flight isn’t not quite as extreme a service as it sounds. The route is a triangular route including Kirkwall, the Orkney capital, and the facities on the remote islands need to be maintained anyway, for emergencies.

If it was just a flight across the strait, a large elastic band might suffice, never mind electric…

Looks like New Zealand is getting “self piloting” electric flying taxis. 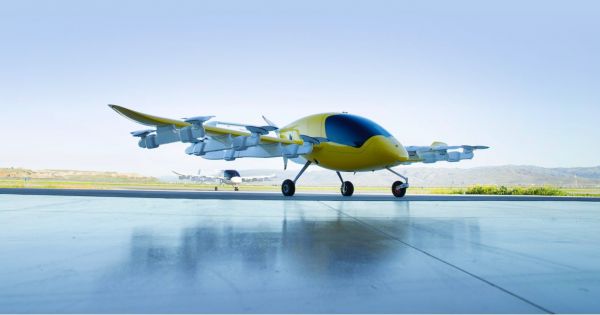 New Zealand may soon get a flying taxi service

The vehicle will have a range of 62 miles and a maximum speed of about 95 mph.

I could see these taking off to fill many short haul flights around the world.

Maybe they should just build a pair of catapults.

Quite a place, Orkney. Was there a couple of years back. Beautiful, calm weather, temperatures in the 20s (70s). We kept wondering, “Why is this place not completely overrun with tourists?” Finally asked someone and were told it had been the nicest three days in 15 years.

So yeah, maybe the water gets too choppy for ferries. But then, wouldn’t that be iffy for planes too? I guess if the wind direction is reliable and not too gusty it would be OK.

I read that it runs a route, with stops on each island, most of which don’t even have airports. So it’s really a bus with wings looping around the orkneys all day. So it might well be more efficient than boats!

I’m not familiar with the Orkneys, but I have spent time on some of the atlantic islands off Ireland and the boats don’t run very, very often. The plane far less often.

Very very short haul for quite a while yet. The only electric aircraft in development with a vaguely decent capacity is the Wright Electric which is hoped to have a range of just 300 miles and is still a decade or more away from entry into service and 300 miles is barely enough to warrant the time spent getting to and in the airport.

There are some longer range aircraft (600-700 miles) in the pipeline e.g. the battery electric Eviation Alice and the hybrid Zunum Aero, but they’re bizjet sized so not going to be taking much market share without selling a lot of aircraft.

We’re going to need much longer range and higher capacity aircraft to make a dent in the short haul market and that means we need batteries with much higher specific energy than what are available now.

Don’t hold your breath for at least a decade.

I think one of the reasons why the water is often so rough in that area is fast tidal streams. I think this is a ferry in the stretch of water between Orkney and the mainland.

I don’t know about the “electric” part of the equation, but given the very real threat of a pilot shortage in the coming decade, we’ll likely be seeing massive evolution in pilotless (and pilot-assisted) aircraft in the near future. The public at large may terrified of the concept, but the alternative is waaaaay fewer, and drastically more expensive, flights. Cost and convenience often win out. I, for one, welcome our new robot pilot overlords.

I, for one, will welcome the quiet.

So, it’s short enough that going electric is actually possible, unlike just about every other air taxi route in existence. But why would you want to go electric, when they already have fossil fuel based planes that work perfectly well? Some reasons that pop into my head:

It reminds me of how elevators used to require human operators to function. The Smith Tower in Seattle still has one of these, it’s too expensive to upgrade.

But the difference is crucial: an elevator accident will only hurt the occupants. Airplane accidents can kill uninvolved people in their living rooms.