I love this part of the story.

“Old stories say that the enclaves were the end result of a chess game between the Maharaja of Cooch Behar and the Faujdar of Rangpur many centuries ago, or the result of a drunk British colonial spilling ink on a map, both apocryphal stories but a good indication of how arbitrary the borders seemed…”

Can we finally agree to return Königsberg (the current “Russian” city of Kaliningrad), historic home to philosopher Immanuel Kant and mathematician Leonhard Euler (who created the field of graph theory through his “seven bridges of Königsberg”) to Germany? Yes, it isn’t attached to Germany as it currently exists, but it isn’t attached to Russia either.

Given how capricious the borders can be, I don’t understand the reverence for nation-states…

The sacred borders drawn at whim or in agreement with their lilly white peers by European powers a century or more ago. The UN honors them more than anything else except when an un-vetoed majority of the security council and the general assembly can be assembled

It’s not nearly as complicated as the situation in Besźel and Ul Qoma.

the enclaves were the end result

sigh, the geo-political world just got slightly less fractal.
Oh well, we still have our gerrymandered districts here in the good ol’ U.S. of A…

We don’t want it back sorry. It’s a ruined, toxic crappy piece of land full of drunken Russians AND at the moment we’re already busy to prob up a country full of drunken greeks.

Ah, the naivete. In other circumstances that might be an option, but you forget that the place was annexed by Stalin, and Stalin knew very well how to do ethnic cleansing. After the war, the German inhabitants of ex-East Prussia were forcefully expelled and resettled in East Germany - at least those who survived the comforts of cattle cars, lowest priority traffic and rape by soldiers. By 1950 there were practically no Germans left there - nowadays, they make up 0.8% of the population.

Not to mention that there’s practically nothing left of Euler’s and Kant’s Königsberg. What wasn’t destroyed during the war was purposely demolished and replaced with the worst that Soviet architecture had to offer. Here, for example, is an extensive gallery of before and after pictures.

Apparently Russia secretly offered to sell the oblast to Germany shortly after the collapse of USSR, but the offer was declined. No surprise.

Absolutely. Hitherto, it may have been problematic for the money collecting classes (the only ones who really have any vested interest in borders in the first place) since any nested border transitions must eventually get so complicated that the cost of processing will exceed the revenue. However, what with computers’n’stuff, there’s no reason at all why nationhood shouldn’t be distributed as spottily and as dynamically as mobile fractal dust, even right down to people. There are individual islands of tax-dodgement walking around freely as we speak, ripe for processing.

I have an uncle in Point Roberts. The entire economy is based on low tax gasoline and cigarettes.

All four of those districts were drawn after the 1990 census to ensure a minority members of Congress (Luis Guiterrez, Cynthia McKinney, Cleo Fields and Mel Watt). An interesting bargain between the GOP and the respective Hispanic and Black Caucuses.

Speaking of Kaliningrad/Königsberg, there was an article published recently about how people living in surviving German-era buildings there are going to flea markets in the area to purchase furnishings from that period for their homes.

The Bychenkos began scouring flea markets, and found that Kaliningrad is awash in old items of furniture, bric-a-brac, paintings, and even appliances from the Prussian-German era.

As they gradually restored the flat to how it would have looked around 1907, friends and even strangers started dropping by to admire it.

Mr. Bychenko is emphatic that he is not questioning the historical outcome that saw a 700-year-old Germanic culture expunged, not only from Kaliningrad but also vast swathes of neighboring Poland and Lithuania, following the defeat of the Third Reich.

Rather, he is part of a growing movement of mainly younger Kaliningraders – supported by local government – who are working to roll back the Soviet-imposed amnesia that convinced generations of people who grew up on this ancient territory that its history only began in 1945. 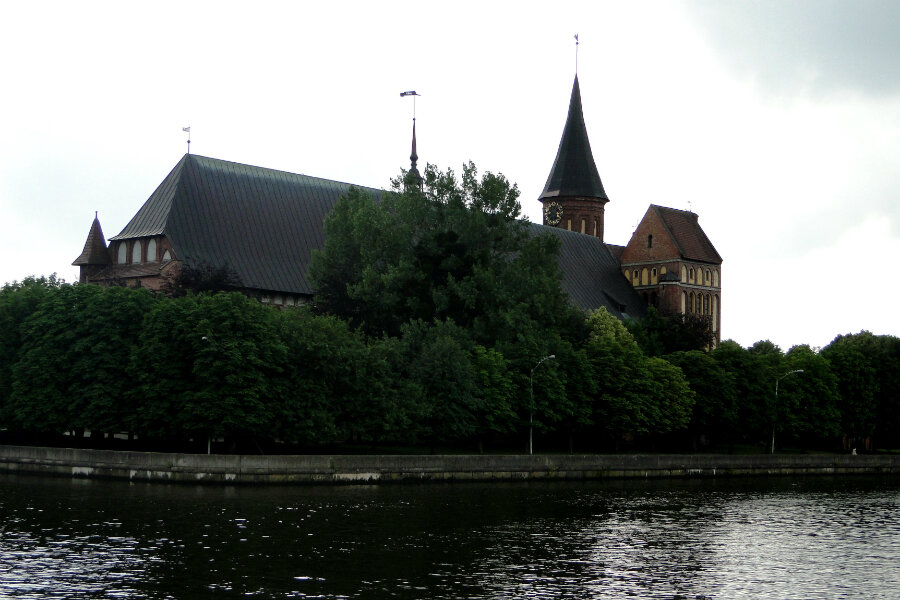 Leveled by the British in World War II and ethnically cleansed by the Soviets afterward, the Russian exclave of Kaliningrad has long had a shaky relationship with its Prussian past. But now its residents are beginning to restore its history.

I have an uncle in Point Roberts. The entire economy is based on low tax gasoline and cigarettes.

I didn’t know that. I did know that the Federal Witness Program likes to put people there because you cross a border twice to get in or out, and because of Canadian laws it’s hard for felons to cross the borders.

Er, what? Königsberg wasn’t something the Germans conquered in WWII but was part of Germany (or its ancestor Prussia) for hundreds of years. Are you maybe confusing it with Danzig/Gdansk which had a much more complicated history and was invaded by Germany in 1941?

I suppose it’s not so very different from my (not at all Amerind-descended) relatives in Arizona taking pride in their home by decorating it with Navajo rugs, figures of Kokopelli, etc.

Just for your interest, this is Dahala Khagrabari. A swampy bit of farmland owned by a guy who lives in Bangladesh. (ie, probably that hut you see in the distance)

EDIT: The original article talks about the People living in Dahala. You can look at a rectangle on a map and be disconnected from what is actually there.
Australians know of named dots on maps that consist of just a pub or a petrol station.