You learn some tricks after competing in a few television-watching marathons. One -- take interest in meaningless sporting events to keep yourself awake. Two -- eat and drink lightly between the...

I’m not a Korean man, but just to be on the safe side, I’ll start drinking.

I have a question for standing desk fans here - what footwear works for you?

I hate to say it, but I’ve been wearing Crocs while standing and they are super-comfy, but sooo ugly. I’m looking for other suggestions.

I have a question for standing desk fans here - what footwear works for you?

Ecco dress shoes for the office; Crocs while at home…

Either way, get an anti-fatigue mat. 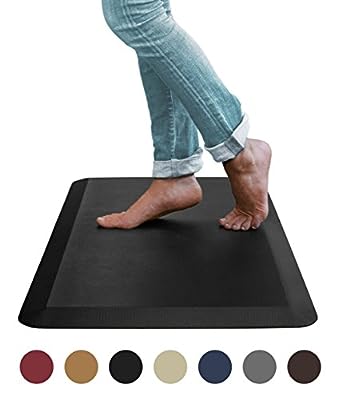 Barefoot in the home office, cheap Target slipper booties when I go to the lab and can get one of the standing desks.

Does standing up truly make that big a difference? Or is it rather that sitting is an indicator of, well, not moving? As in, a sedentary life style?

Bare feet are the best and I stand in beach sand, it’s free and easy to swap out.

I stand and walk most of the day, and I use birkenstock and a knobbly rubbery mat. Not ideal from a fashion standpoint, but works all right…

Previous studies with similar conclusions claimed to have adjusted for physical activity levels.

I too am curious.

Personally, I leave a kettle bell in the middle of the room between me and the kitchen door. Supposed to pick it up every time I walk past it but the weight of it on my mind ensures I at least do some swings every fourth or fifth pass.

the weight of it on my mind

(I’ve had that song in my head all day; it was pretty great the FIRST twenty times, less so after that.)

Barefoot- or, in situations that didn’t allow, Vibram FiveFingers.
Of course, those are ugly. I won’t argue that.

After a while, I seemed to build up some level of stamina and footwear mattered less.

Well, despite best efforts to correct for confounding factors, early studies suggested coffee was dangerous - in all probability because drinking coffee and smoking went together so well and so often for so many people. More recent studies seem to indicate that coffee is healthy.

I’d think we can pick out the stuff that is really dangerous or really good for us, but all the rest probably just gets drowned in a sea of confounding factors. As to whether standing desks really are healthy, I’d hesitate to have an opinion just yet. Maybe in a hundred years or so.

It’s pretty hard to argue against or remain skeptical about the overall idea that sitting all day is somehow harmful (although ever met a waiter at the end of a long shift? Not exactly feeling super healthy…) but I’m always curious about who the control group here is, and whether their number is large enough to be generalizable. I mean, where are all these people who don’t sit down much (besides on r/standingdesk, and in the bbs comments section…)

It is obviously harmful to have a sedentary lifestyle. What I wonder is if it helps to use a standing desk, and stand still all day, instead of sitting still.

My own experience is anecdotal but I switched to a standing desk about 2 years ago after decades of chair sitting. After developing the necessary endurance I now go back and forth throughout the day - standing for an hour or so at a time then sitting for an hour. I definitely noticed an increase in my overall energy levels and less feelings of fatigue and sleepiness (especially during the after-lunch doldrums).

I now notice when sitting that I like to sit very upright in a rigid posture and cannot rock back into the seat like most people do. Sitting puts considerable strain on my lower back and upper thighs which prompts me to start standing again.

If I’m on a conference call, I am usually standing and more than likely pacing around my desk area now - so my theory is that standing by itself is marginally better than sitting but that it also prompts you to move around thereby increasing your overall movement throughout the day.