You can reduce highway lanes without making traffic worse

In San Francisco, I was highly skeptical of the Cesar Chavez improvement project when it began. They were going to reduce a high-traffic thoroughfare that always felt like a congested LA street from three lanes in each direction to two lanes in each direction. I thought it was going to make things worse, but the island they installed in the center of the roadway allowed for turn lanes where there previousl were none. Traffic is much better now!

We see this in the short term, too. LA had their Carmageddon that – lo – never came to pass, and Chicago just shut down the Kennedy through the Loop for the past two weekends…and it was a non-issue. 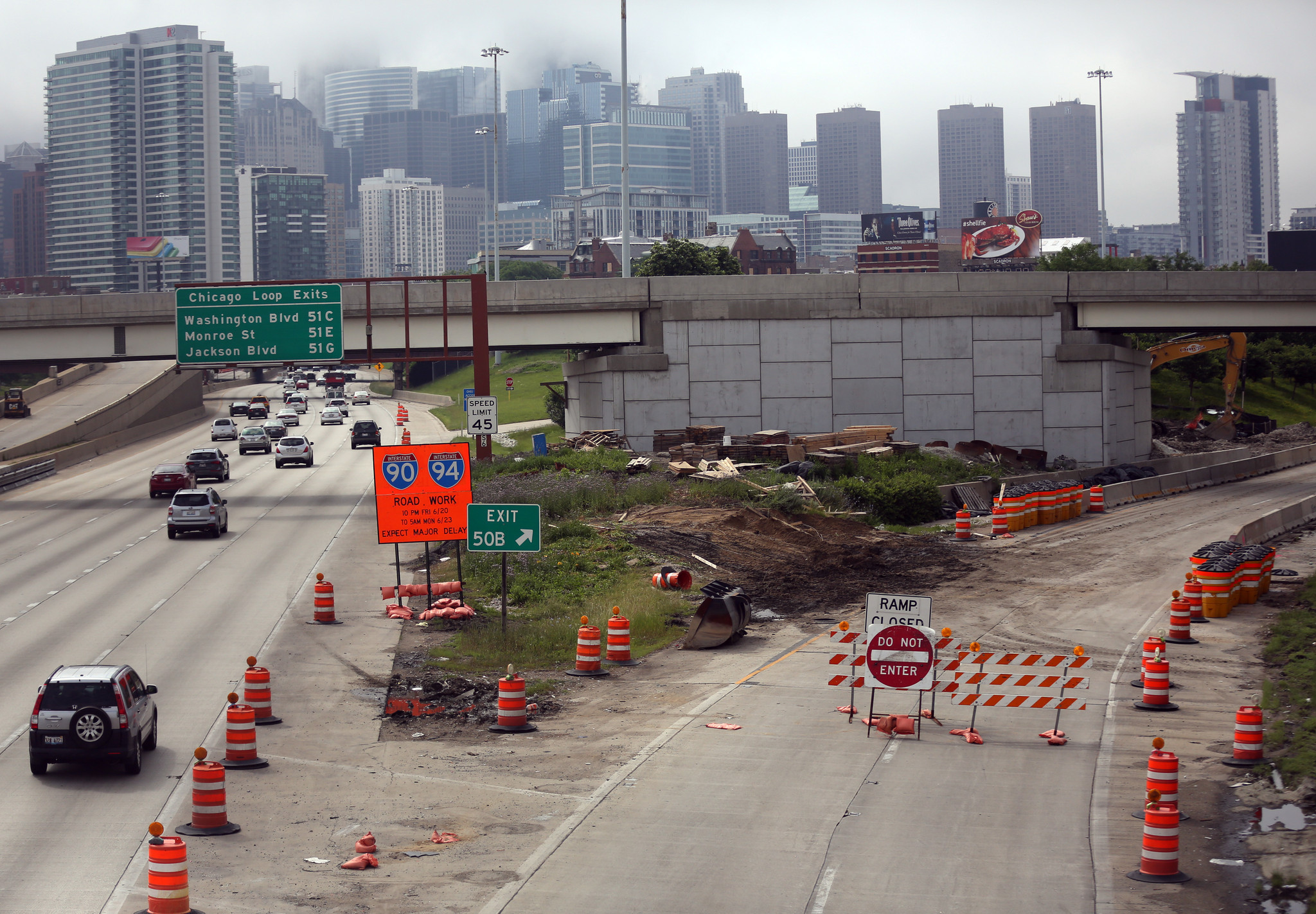 Kennedy works progresses ... without the nightmares

Warnings of a traffic nightmare proved overstated Saturday, just as they did last weekend, as bridge demolition work that shut down part of the Kennedy Expressway progressed.

Best analogy I’ve ever read (and I’m paraphrasing) was that two people had to race to get as many pinballs through a tube to a barrel at the other end as possible. They both started with the same number of balls. Person one could dump them into a funnel that had a tube going to the barrel. They could do it any way they chose (one at a time, with a bucket, etc). Person two had the same number, but they were all put into smaller PVC pipes of like 50 in a row, preloaded. Which probably gets all the balls in the barrel faster every time?

It’s not a matter of bandwidth, it’s a matter of efficiency. If anything, more room creates more ability for drivers to try and disorganize, and that’s what creates traffic problems.

To anyone who grew up playing Sim City, this feels like a “well, duh” sort of article. The more roads you build, the more angry the Sims get.

It is interesting to know that they got the model right.

How can you say that with a straight face when there are examples of adding additional lanes (or even an entirely new road) significantly improves traffic? It’s demonstrably untrue.

If you were to say you cannot always reduce traffic jabs by building more lanes, I would agree with you.

We have a similar program here in the US. It’s called “no money for highway repairs for 40 years.” This program also reduces the number of bridges.

Something that would really help in some cities - remove interstate entrance/exit ramps except at: the outside limits of the city (westernmost point when traveling eastward, northernmost point when traveling south, etc). Possibly one at the halfway point between those. The goal is to keep the commuters off the interstates, which tends to move them at high speeds to the next choke point.

Historically traffic grew to fill the means of transport. Early people congregated on waterways because they were natural means of transport. Entrepreneurs built railways and interurbans to generate traffic–not improve existing traffic flow. Most times the money they lost building the transport networks was made up by an increase in the value of real estate, coal, and other geographically fixed assets they owned.

To anyone who grew up playing Sim City, this feels like a “well, duh” sort of article. The more roads you build, the more angry the Sims get.

It is interesting to know that they got the model right.

They also modeled pretty well how cities are forbidden to be more than a few blocks big, must be separated by barren wilderness, and that each and every citizen must have all of their hopes and dreams fucked by EA.

These living systems are fascinating.

The same conservation strategies should also work with Energy dependence, as people will self-regulate their consumption if proper (dis)incentives are provided.

But, crucially, politics is all about what the people will accept in the way of future outcomes when any act is done.

I can only speak from personal experience, but around these parts, they have been endlessly building lanes since I lived here and the traffic is just worse - every. single. year. Even when they finish up with a project, and that highway is free and clear from construction, the traffic is just worse. Part of the problem is the increase in population, especially on the west side, especially in the suburbs, but I honestly don’t think building lanes is helping.

Can you come up with an example where traffic was improved by building new lanes? I can’t think of an example off the top of my head…

If population is increasing, then that’s the one case that everybody agrees that more lanes for traffic may be needed. I know in my own neighborhood, some turning lanes were added on key roads and it made an enormous difference.

In Austin, they opened SH-130 a couple of years ago and it has made a huge difference. It also helps that the speed limit on that road is 85 mph. They have also been building new roads to bypass the busiest parts of the cities and that seems to be helping a lot as well.

Recently read this article http://www.wired.com/2014/06/wuwt-traffic-induced-demand/ about “Induced Demand” We’ve all seen it, big new highway within weeks it’s filled up and you are stuck in traffic again.

You nailed it!
The weak link is the interchange of people getting on and off a high speed roadway.

“You can reduce highway lanes without making traffic worse” is a little misleading. This study basically says if you have shitty traffic and reduce the lanes people with change their patterns to avoid these routes. This study feels a little thin for the “solutions” they provide.

What it points to is adding a new lane but changing nothing else dose not make traffic go smother.

So…no entrances and exits, and no traffic jams

It’s thing that is definitely different between the UK and the US though - in the UK motorways don’t go through cities, but around them. Which means you get the jams on the A roads instead, but still…

As someone who drives on it twice a day, I shall be intrigued to see what happens when the viaduct is demolished in Seattle. I don’t think the tunnel should be being built instead.