Originally published at: You'll likely be surprised to discover who's the most successful predator on Earth | Boing Boing

At least we’re not in the Carboniferous Period… 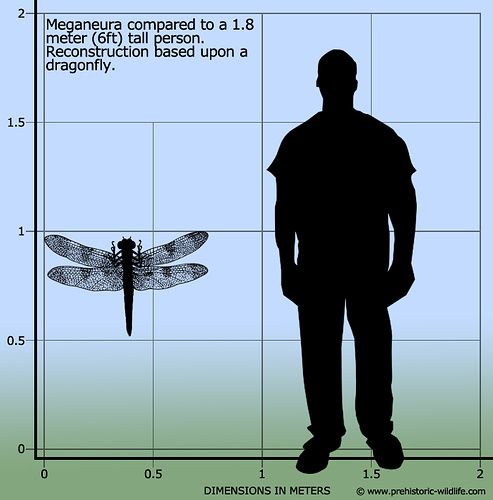 Meganisoptera is an extinct order of very large to gigantic insects, informally called griffinflies. The order was formerly named Protodonata, the "proto-Odonata", for their similar appearance and supposed relation to modern Odonata (damselflies and dragonflies). They range in Palaeozoic (Late Carboniferous to Late Permian) times. Though most were only slightly larger than modern dragonflies, the order includes the largest known insect species, such as the late Carboniferous Meganeura monyi and...

Back in 2020 we had an unusually large population of dragon flies. You walked out the door and they were everywhere, could have made a horror movie. We think it had to do with the extreme high water around us and over abundance of mosquitoes. My wife was always checking spider webs and rescuing them.

It was easy to get photos. At various times that rope (bridge for our squirrels) would have maybe 50 of them all touching tail to face.

This one smiled at me. 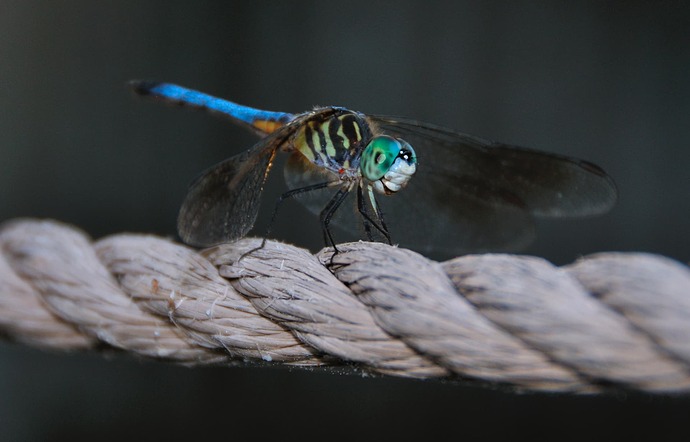 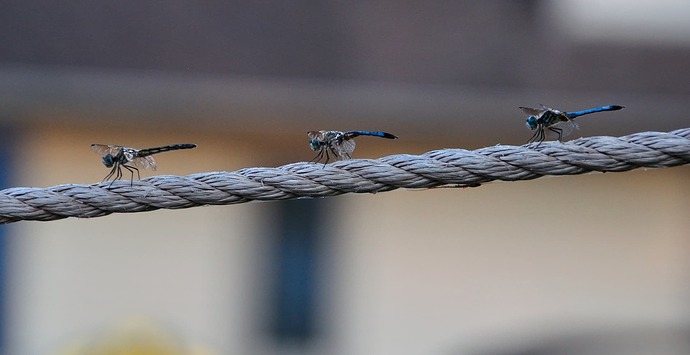 No, I wouldn’t be surprised.

I’ve known for ages that dragonflies are totally badass, and I just watched a cool doco on them a few weeks back, getting into all the nifty deets.

Probably; gimme a sec to look, it’s not in my feed because I watched it with my chargie at his house…

I think this is it; will check with him to be sure on his lunch break:

For the first time, I had a dragonfly hit one of my flies mid-air this spring.

I was just setting up to float out on one of my favorite lakes and was lifting my flies off the water at the boat ramp to stow my rod, and a dragonfly gracefully swooped in, hit my callibaetis nymph and released it before flying off. There was the barest of pluck on the line before it rejected the fake.

Neat! I’ve had swallows do that, but never a dragonfly.

That would actually be pretty awesome; not really any more threatening to humans than the birds of prey are today(though perhaps keep the smaller pets indoors); and must have been a creature of truly striking majesty and alien beauty.

Really, its the small bugs you have to worry about; the ones that either carry parasites, use venoms and poisons, or just eat your stuff. Dragonflies are murderously effective interceptors; but they fight nice and clean; and they’d need to be significantly larger still to treat something the size of a human as sensible prey(especially when too much wing damage would make even a victory lethal; so they really don’t want to go after something large enough to get a thrashing limb or two out of containment while being killed.)

Nah. I’m just worried about one hitting my windshield.

Over hours of observed footage, “No unsuccessful attempt of prey capture was observed in any individual birds.”

Ars Technica did a story on it at the time: “Mini penguincam catches birds’ hunting success”, 2013-01-22

The African wild dog has an impressive 85% rating.

Just out of curiosity, I’d like to see a breakdown between pack animal predators versus lone hunters.

Just talked to my flame; turns out that we watched a few of them that day:

The True Facts Dragon and Damselflies episode is easily one of the best in a very good series.

Wow, talk about Netflix and Chill!