I’m looking for good smoothie recipes for my mornings, particular ones you can make ahead of time. I’ve done searches but it’s hard to know whether it’s a good recipe or not. I trust you guys. What do you like?

Mine are… generously sized and clock in ~450 calories. Can be scaled, obviously. You can also slip some greens (baby spinach, for example) in there with few ill effects. Lighter versions can skip the peanut butter (but really, why would you?)

Frozen orange juice, water to taste
Banana for texture
Frozen Mango, cause who wants a smoothie without mango?
Lemon juice to taste

Do you grind or soak the chia in advance?

What kind of coconut water do you use?

Assuming you’re referencing mine:
I don’t soak or grind the chia seeds- I just lob them in. Between the Raspberry and Stawberry seeds in mine already, what’s a few more?
For coconut water, I use the plain-jane Trader Joe’s stuff. It’s (relatively) low cal while still having some nutritional value.
My aim was to add as little un-fiber-buffered sugar to the thing as I could- thus the unsweetened yogurt and the lack of juice. I tend to like tart anyway.
The yogurt and peanut butter are there for protein (and calcium) as well as fat- I need this thing to keep me satiated until lunch, so those calorie hits are worth it to me. YMMV.

Okay because I got burned on the chia seeds before. I tried this recipe and basically it tastes like nasty slime.

These easy, make-ahead smoothies are packed with nutrition. Refrigerate or freeze them in individual servings for a healthy grab-and-go breakfast or snack.

Yes - me, too, trying to do not sugary stuff. I’ve so far landed on milk and I do add a little honey because otherwise it just is too blah for me.

So the downside to either of my recipes is that you can’t do a ton of stuff with them ahead of time. You could portion out and pack the frozen fruit, I suppose.
I combine everything in 1qt mason/ball jars and use an immersion blender to… turn them into smoothies. During the summer, I would make one for my wife, but leave it unblended in the fridge for her- she’d blend it a couple (1? 2?) hours later and it’d be totally acceptable.
Either way, blending a day ahead will leave you with gross.

I have a good blender and I have a Magic Bullet. For make ahead it seems to work to put stuff in a big jar for storage, then divvy up an individual portion in the morning into the Magic Bullet and giving it a little whirl to mix it up again.

This seems tasty but it’s a lot of sugary fruit. I’m trying to figure out something that will keep me full most of the morning.

yeah, a Small will do ya 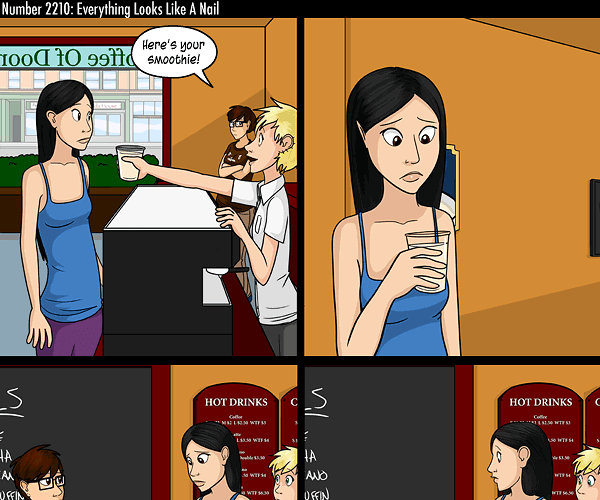 Yours sounds most excellent, but I’m hesitant to try the coconut water (since I really dislike the taste of coconut). Is it there for a functional reason, or just for flavor? Could I add some other liquid (milk? soy milk?) or would that screw things up? 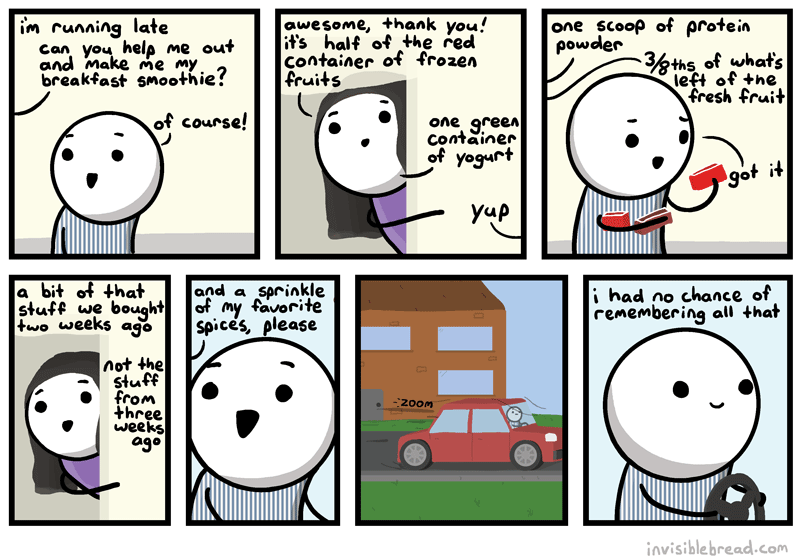 It’d likely be decent with other liquids, but let me point a couple of things out:

Still, if out of stock or pressed, I suspect Almond Milk would work (though I’d make sure it was unsweetened- otherwise it’d be sweet enough to end up in dessert-land). Or water, but what fun is that?

I tried making my own almond milk today. It’s one of those things that just seems like a lot of work to make what is basically flavored water. And it takes the fiber out. So I’m not sure I exactly get the point. I guess I just feel weird adding just water to a smoothie? It’s clear the commercial brands add lots of sugar, flavoring, and thickeners as grinding up some almonds with water then straining it does not result in anything except some murky looking water.

Okay, after I wrote that I decided to look for another almond milk recipe and found this one:

It mainly differed from the first one I found in that it instructs you to blend the almonds to a paste first then add more water. I liked the result much more, plus adding a touch of salt as suggested improved the flavor.

I decided after starting to strain the result that actually I like the almond bits in it and left them in. This is definitely more “milky” feeling. However, it seems you could get a similar result just from starting a smoothie by blending almonds to a paste and adding water to that; the only real difference is soaking the almonds so I guess you’d need to keep some soaked almonds around or soak them and freeze them.

I’ll see how this works.

blend the almonds to a paste first then add more water.

That’s how I do it! I use raw almonds that still have the skins on 'em, and I don’t add any syrup or anything else. Just almonds and water. I don’t use cheesecloth, either - just pour it through a strainer. After that, I put the, uh, ‘pulp’ in a cotton cloth (about the weight of a flour sack towel), twist the top, and squeeze any remaining moisture out of it. And then I add the remaining almond meal to my oatmeal.

That’s a good idea. A lot of people suggested drying it into a flour but I wasn’t so sure I’d really use almond flour. Sounds tasty in oatmeal.

This topic was automatically closed after 535 days. New replies are no longer allowed.