15 impossible videos of babies and todllers escaping from cribs 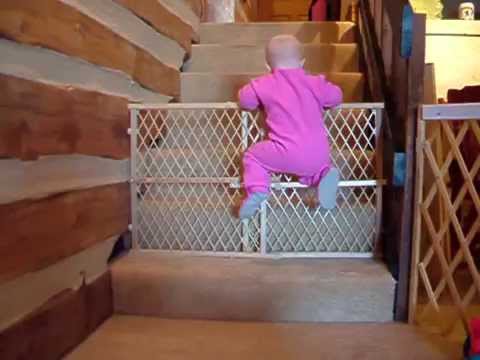 YouTube Doubler: 12 month-old, Mia, makes a break for it and jumps the baby gate. Catch the Remix here: http://youtu.be/prz6l-BGLOk VS.

What’s even more fun is that older (toddler) siblings will teach their younger brothers or sisters how to do it, so the learning curve for later children is shortened quite a bit.

I don’t know if this displayed the same for others, but the looping gif of Michael Jackson gleefully looking up at these videos and downing handfuls of popcorn was…uncomfortable.

The wife apparently piled up all her stuffed animals in a corner and walked out when she was a babe.

We don’t give our kids stuffed animals.

And people still freak out at the suggestion that we’re pretty close to chimps. Go you little monkeys!

Yeah, (for at least the first few videos I watched) they aren’t babies, they’re toddlers, and they’re too big for cribs like that. It’s time to move them to a bed and start dealing with bedtime.

while i enjoyed the feats of infant parkour, this also made me a little sad.

for most of humanities existence, if you left your baby all alone it was eaten, dead or injured…babies are wired to always want to be near the safety and comfort of their parents. in our modern world, we have these big houses with all these rooms, and can shut babies in their own rooms in cage beds and just leave them there. just seems a little unnatural to me and I can understand why they get so upset, cry, and want to be closer to their parents.

Oh, how you misunderstand. This isn’t always kids wanting to be with parents. Sure, up to a certain age infants probably want quite a bit of physical contact for soothing, and even older toddlers may wail when you put them down for the night.

But quite frequently their motive is just the opposite: The urge to explore places they aren’t allowed to go when you are around.

My daughter, well before she could walk, wanted to crawl the halls outside our apartment on her own. Having a heavy wooden door with a handle out of her reach and a retractor that took us adults some effort to pull open, it didn’t ever cross our minds that she could possibly leave on her own.

But that clever little monkey somehow found a broom and managed to wedge the broom handle in the hook-shaped door handle, tilting it enough to retract the latch. Then she used the full force of her body to pry the door open while lying on the floor, and was in the process of shimmying through when we noticed the door thunking and put the kibosh on those plans.

Higher up, less easily manipulated dead bolts did the trick in our case. But don’t underestimate the desire of children to go where ever the hell they want for reasons other than the pleasure of your company.

Nothing unusual here. At about sixteen months, our daughter (who came to us at 13 months) demonstrated quite happily that she had worked out the trick of clambering in and out of her crib. That was the day we converted it to a kid bed, once I had taken the obligatory movie or two. (My movies were 30-second length, and silent, and we liked it.)

You put your kid in their bed because that’s where they belong and it’s their bedtime. They often don’t want to go to bed because it’s more exciting not sleeping or they’re too tired or they’re still excited from the bath or they wanted to fall asleep over there or their sibling is doing something neat or simply because they just don’t feel like it.

But you, the adult in the situation, know they have to wake up in ten hours to get out the door in time. And if they don’t get those ten hours of sleep they will be a horrible little person and impossible for both you and the various caregivers in their life to manage. So you want them to sleep for their own health. Because they are too young to reason with.

We’re not talking about putting them in a Skinner box or poking them with sticks. We used to think that giving them Coca Cola was a good idea. For most of humanity’s existence we used to think seatbelts were pointless and that it makes total sense to smoke cigarettes all the time. Hell, my grandmother put rum on my gums to “help” with teething, which is a terrible idea. Science moves on, and that includes “instincts.” Providing them a comfortable dark room with a bed that is designed entirely for their safety is actually really good for them to get their required hours of consistent sleep.

Holy crap. You have no hope!

Whatever works for you! We co-sleep most nights. It’s not for everyone, but I see it more like this:

It takes a certain amount of fearlessness to do it. Our younger daughter surprised us at about 20mths when after putting her down to sleep in her crib, in moments she was crying behind the door.

She did it differently than these toddlers, she got one leg over, straddled the railing and then for balance she placed each foot in the railing from each side. Then she went down on one side. Her crib was even higher than some of these in the videos. Surprisingly her older sister (by 2years) never did it and probably wouldn’t even do it at 4or 5.

Whatever works for you! We co-sleep most nights. It’s not for everyone, but I see it more like this

We often co-sleep as well, it is wonderful. I wish I could like that photo more then once.

You put your kid in their bed because that’s where they belong and it’s their bedtime.

First off, we are discussing babies, not children, lets not obscure the point by incorrectly conflating the two. Babies cannot fend for themselves and are not biologically wired to be separated from their parents, children have much more autonomy.

I urge you to actually read many of the infant sleep studies.

A large study on SIDS shows 1/5th the risk of death for sleeping infants simply sharing the room with non-smoking adults.

The need for seatbelts became very clear not very long after they could go above a certain speed, in under 1 generation.

Likewise I see the reverse analogy w/ cigarettes, something that were only tried in a widespread mainstream manner for a short time (a few hundred years) before we collectively realized that it was a really bad idea, nor was it any better of an idea before we realized the harm it caused.

[quote=“SteampunkBanana, post:13, topic:50324”]
Science moves on, and that includes “instincts.”
[/quote]The science is pretty clear if you read up on it, sure we tried something new for a bit as a society and science has studied the impact of those changes. Science isn’t what spurred this change, nor does the science support it.

[quote=“SteampunkBanana, post:13, topic:50324”]
with a bed that is designed entirely for their safety
[/quote] All those kids in those videos successfully escaped their cribs, but if you look at crib statistics there are a lot of head and neck injuries every year from kids taking headers when trying to escape…the age range where the bars are “safe” is very narrow and after they they are way more dangerous. There are other much more safe options.

Dr. Spock, the “let babies cry it out” for a few weeks until they stop crying from being left alone doctor, who our parents read when we were children was the first to suggest this idea, and later in life he retracted and profusely apologized for this theory. While cribs have been around for a bit of time, they were almost always in the parents or nurses room, isolated sleeping conditions are fairly new to the last 2 generations.

Just some food for thought.

Do what you feel is best for your children, I’m just relating my experience and the information I’ve learned with mine.

I give you a notional like for the comment directed at me, but I can’t buy into a parenting argument, no one can discuss it objectively and they always spiral out of control!

The Japanese call it sleeping “like the kanji for ‘river’.”

The first mistake video number one (the baby climbing over the gate on the stairs) was to put the bar on the baby’s side. You’re just making it easier.
Boy I wish I had videotaped our youngest though…although I probably don’t, because that would be the time that he fell to his death. You see, in order to prevent the babies from getting into the den/computer room in our house, we put up gates. Youngest climbed them like they were nothing. So we put up two gates, stacked they were around six ft. high. I go off into the kitchen to make lunch for him and his brothers. Come back, he’s over the double gates.