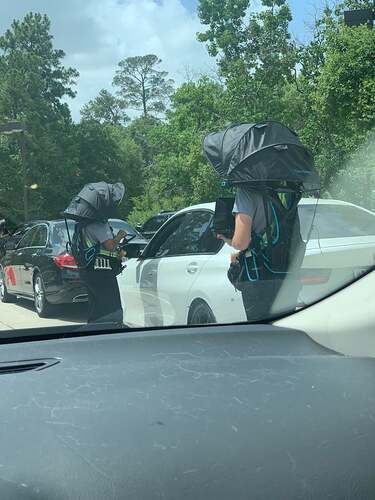 Sounds like things got a bit Fyre-y out there in the desert.

The hikers may not have “done their research,” but the show producers must have some sort of due diligence responsibility, no? And “if you die, you die! It’ll be great for ratings!” does not count.

Scruples, ethics and realty tv rarely mix. Realty tv producers are more than willing to use child labor, transphobia, misogyny (as seen on pick up artist shows) and ethnic stereotypes to make a quick buck.

Plus it sounds from the title like Xtianists are involved, which would only make that already bad situation worse.

I think they missed the preposition “to” in the title.

They probably did not consider death, but I would very much bet that having an excuse to show the women sweaty, out of breath, and not wearing that much clothes was factored into it.

ETA:
Reality TV is what gave us Trump. It should be considered the fifth Rider of the Apocalypse. Though I admit to liking Chopped.

For a moment, I thought those were police officers wearing gear to discourage them being identified when filmed.

Scruples and ethics have no place in ‘realty’ (which I understand to be the USian term for estate agency or property sales). So would not have any role in TV about the topic.
(Sorry, open goal.)

But yeah, scruples and ethics are a far lower priority than sensationalism and ratings for reality TV producers. I hate how the ‘fly on the wall’ reality TV documentary format has become “let’s set up some entirely false situation, engineer and manipulate it and put a fly-on-the-wall documentary method on top of it” and call it ‘reality TV’ - it is about as real as that dream I had last night about (wait, too much information…)

I definitely read that as Bad Girls Gone Good in the blog post, and had to go check you weren’t making some other amusing point. I guess I’m not as ‘God aware’ as many.

Scruples and ethics have no place in ‘realty’ (which I understand to be the USian term for estate agency or property sales). So would not have any role in TV about the topic

A disproportionate number of contestants on these “reality” shows identify themselves as real estate brokers (un-credentialed personal trainers and “life coaches” are also popular), so there’s some overlap.

The Holy Roller Industrial Complex is, from what I understand, more prevalent in the US than the UK, so we’re likely more used to being wary of it this side of the pond.
Oh look, a bookstore

Yeah, I almost came straight out and said ‘I guess it’s because I’m not American’ (rather than just less God-aware) but didn’t want to offend all the godless Americans here.

Speaking as a godless American, I’m not offended when people note that the U.S. is poisoned by Xtianism and other fundie religion to an embarrassing extent compared to other OECD countries.

Apparently nobody mentioned water, either. (Hint: a half-liter sports bottle won’t get you to either of the two trailheads. At least two liters unless you’re very well acclimated.)

And then there’s appropriate clothing …

Phoenix Fire says some only had a small bottle of water.

Phoenix Fire says the hikers were spread out between several mile markers of the trail.

And by small bottle of water, I’m sure they mean one of those stupid plastic bottles that people are forever dropping on the trails.

And stops for situational reassessment. i.e. if you’re feeling the heat on the way up, turn back now.