I was just coming over here to make a comment about the square, boring abominable snowmen not covered by this volume. 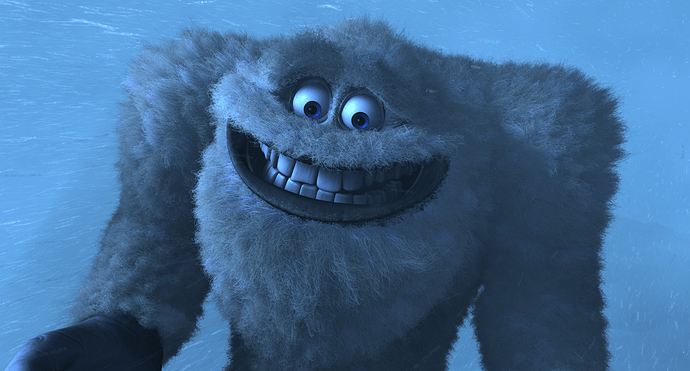 LOL daymn, I came in to ask for the “Well Adjusted Abominable Snowmen”.

This is a good illustration of why it is CRITICAL to have an executor who understands your art and other collectables, and to have an inventory to help them which gives the significance of pieces of particular interest. I’ve seen too many reports of “I don’t know why they kept this, nobody wants it, throw it in the yard sale or throw it out”… and you can’t count on someone howling “noooo…” and being listened to.

to my eye, it’s a copy. the la book cover extends the landscape beyond the painting, and the shadows on the human don’t match. fan-art?

[edit] or, if original, maybe the canvas was re-stretched to a smaller frame?

Kinda looks like different techniques as well – the garage sale find looks like an airbrush on watercolor board and the cover looks more like pastels or something.

It could be an “original” but be an alternate version or a study for the final version. I own a few studies of that sort.

Technique is hard to tell on a cover, after reduction and engraving and halftoning and the printer mucking with the colors… never mind covers fading over time.

“Abominable! Can you believe that? Do I look abominable to you? Why can’t they call me the Adorable Snowman or…or the Agreeable Snowman, for crying out loud?”

“He claims it’s made from the pelt of an Abdominal Snowman, or something like that.”
“Abominable.”
“You said it.”

Paraphrasing from memory an old short story by one of the SF greats …Frederic Brown, perhaps; I seem to remember it appearing in the same volume as Etaoin Shrdlu.

I thought this must have been an expression of exasperation on the under-representation of codebreakers at the NSA until I noticed the zoo.

Having been lost for decades, it recently turned up at a yard sale.

Yeah but was anyone actually looking for it?