Oh man. I guess they missed the biggist reality TV show of all with the surprise twist ending and which hopefully only runs for one term/season.

Was this meant to encourage them to try really hard to stay in the house for as long as possible?

Thank Dog they have each other for comfort.

I guess I have been living in a bubble, because I had no idea that Big Brother had a US series.

Can you imagine signing up to be on Big Brother, only to find out that in the meantime, the real world had turned into a reality TV show?

My surprise is that it still has a US series. I remember it from back in the early 00s, but didn’t know it’s continued to run all this time.

Then again, I did know Survivor is still running… so I guess it’s not that surprising.

reality tv can be very cheap to produce so even with very middling ratings, it can still turn a decent profit (which explain why a third of cable shows are this kind of cheesy trash)

I think the only other time they broke into the show to alert contestants about outside events was after 9/11.

which, y’know, begs the question, if this is the Y2K election all over again, what’s going to happen to us all a year from now?

Big Brother US is a long time guilty pleasure of mine so I was just providing a bit of historic context.

All news will, from now on, be accompanied by bouncy pizzicato strings.

But to all of us.

What’s next? Can we look forward to a feature on the “candid” reactions of the WWE? o_0

What’s next? Can we look forward to a feature on the “candid” reactions of the WWE? o_0 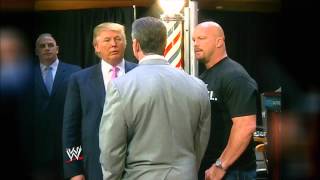 Trump is a friend of the WWE so this doesn’t surprise me in the slightest.

Trump is a friend of the WWE so this doesn’t surprise me in the slightest.

Well-known. Linda Mac donated a few million his way, and she’s had a failed run at power herself.
What is interesting is given Vince’s mercurial approach to booking and willingness to bury talent for incredibly petty reasons, I’m surprised anyone would have spoken out against.

JBL and Lawler are well-known for being assholes (in Lawler’s case, a very creepy, possibly rapey one) but some of the new blood like Corey Graves and Sami Zayn… things like this have killed careers.

as the average human IQ falls, the odds that we are all living in a reality tv show approach infinity.

It’s only a limited sample, and there’s at least one kayfabe reaction in there (Lana’s just so good at that!) but it didn’t surprise me at all to see who spoke in favour and who was being carefully diplomatic. Their various backgrounds are also relevant, with Sami Zayn being a Syrian-Canadian Muslim and at risk of deportation under the new regime.

True enough. I’d guess professional wrestlers as a whole skew pretty politically conservative, in part because the people who do the job are probably people who grew up enjoying watching it, which tends to be a sort of conservative base. I loved pro wrestling as a kid, but I’m sort of not the key demographic, though.