64% of Americans, including a majority of Republicans, support legalizing marijuana

‘Bad new for the private prison industry’ my ass, more people support background checks for guns and that has no chance of implementation. Weed, much like renewable energy, could be a boost to the economy by creating a lot of jobs but it messes with the GOP agenda so we will watch the rest of the world move forward while we think about how great we could be if only we did Reaganomics, again.

See privatisation in the UK for example, the majority hate it, but it’s happening faster than ever.

The raw money in charge of the Tory party here sadly overpowers all dissent.

Can we please stop calling it by its gd slave name? The weed is called cannabis.

Only reason it is still Schedule I is racism. We started calling it marijuana due to some racist right wing a-hole named Harry Anslinger. Abetted by Nixon’s racist war on drugs bullhockey.

I mean look at the hell holes that are Colorado, Washington, Oregon, California, uh and all the rest, I’m hungry, what was I talking about?

EH - feel that is false equivalency. Huge differences between the two issues.

Personally I have been calling for legalization for over a decade. I don’t use it, but if it were legal I would try it for my chronic pain issues. I’d even legalize most drugs, honestly, as the source of income and power - and the allure that comes with them - dry up for the criminal networks (both large and small). Sink money in to education and rehab. As other pointed out in other threads, even decriminalization like in Portugal has measurable positive results.

Private prisons are evil. Legalizing cannabis would immediately undercut their labor pool considerably, so I’m glad that most people support it. I’d be surprised if it was taken off Schedule I during this administration, though.

I think the best reason to think the “legalize recreational marijuana” movement has legs is that several states, including the most populous state in the nation, have already done it.

By Summer of 2018 it will be legal for adults 21 and over to smoke marijuana for recreational purposes in Alaska, California, Colorado, Massachusetts, Nevada, Oregon, Washington DC, Washington State and possibly Maine. That means something like a quarter of Americans will be able to toke up legally, and that doesn’t even count all the states that will allow it for medicinal use. Hard to imagine how they could put that genie back in the bottle.

The moment these GOP pricks figure out how to dominate the industry and monetize the fuck out of it, it’ll be Federally legal. What I can’t figure out is why aren’t the existing cannabis businesses buying up GOP congressmen like the Oxy makers did? Honestly, congressmen aren’t that expensive, pocket change for most businesses. $20k will have them fawning over you. Imagine dropping a suitcase full of weed cash on their desk, explaining that they’re not legally allowed to bank it?

The latest Gallup poll reveals that more Americans than ever support the legalization of marijuana for recreational use.

I’ll theorize that’s because more Americans than ever are getting high as the proverbial kite to escape politics and the economy.

bad news for the private prison industry, which poured hundreds of thousands of dollars into Trump’s campaign fund in the hope that weed foe Attorney General Jeff Sessions will lock up millions of mild-mannered dope smokers.

Oh, they’ll be fine! They have a solid backup plan; by preventing physicians from prescribing safe effective painkillers they are vastly expanding the heroin market. 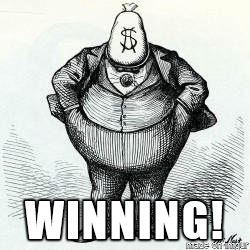 The Weed Glut is so bad here in San Diego that the dispensaries are giving it away. If you come to town, look at the last 10 pages of the Reader, many to choose from.

A majority of the people may support it, but a majority of the dollar bills (or rather their possessors) do not, and we live in a kleptocratic oligarchy, not a democracy.

Totally missed my point about what people want and changing laws but OK. Also gun shows and background checks, that’s a Venn diagram that does not meet, so uh there you go.

Too bad we don’t have a representative democracy. By the way, I have never once been asked my opinion by any “official” pollsters

Much like prohibition of alcohol, we need a movement of jury nullification. It was when the people decided to not prosecute the accused that our government finally realized the fight was over.

I didn’t miss your point. My point is just because some people want some laws passed and they aren’t getting passed for some things, doesn’t mean that is true for other things. There has been a lot of movement for weed legalization and it has been successful. Multi-billion dollar industry successful. There also is not a big organized movement against weed legalization (at last not nearly as powerful as the NRA). Though in some places the people in power are the ones who are of that stance, i.e. Sessions. But his days are numbered. The various smaller entities against it aren’t organized and aren’t stopping it slowly becoming more acceptable. Like I said, it’s HUGELY wide spread use, even among the WASPs, and its rather safe effects has made its demonization largely toothless.

Also, fun fact, gun shows are usually ~99% FFL vendors (depends on the show), and all of those sales go through background checks. If the seller is private or selling a personal firearm to another private person from the same state, face to face, they can do so with out a check. Anything else requires a check. Those account for small minority of all the sale at a show. Also, according to the Beau of Justice survey (albeit it was small and older), gun shows were like 6% (IIRC) the source of the gun used in a crime. So you are looking at a very small percentage overall. One may still want this law changed, but I’d be remiss with out making sure those facts were in the open. YMMV.

Different world and all that, but the Temperance movement found a way. So there is precedent.

Yeah, but the temperance movement is really more analogous to the initial anti-marijuana movement of the 1930s.

I can’t think of any precedent for our society banning something, collectively realizing said ban was horribly misplaced and counterproductive, rescinding said ban, then banning it all over again.

So you didn’t miss my point you applied reductio ad absurdum to show that two different things (weed and guns) with similarities (both enjoy a majority support for changes in the law) are different. Take care.

I can’t think of any precedent for our society banning something, collectively realizing said ban was horribly misplaced and counterproductive, rescinding said ban, then banning it all over again

As unlikely as it is, I’m really hoping that we eventually go that way with assault rifles though. (Not that I think that the now-expired ban was counterproductive, but surely some people do)

As unlikely as it is, I’m really hoping that we eventually go that way with assault rifles though.

Possession was never banned, only sales. Also, the specifics of the ban were pretty fucking silly, and had a lot more to do with how a gun looked than with its functionality.