A better way to husk corn

So what you are really saying is screw the knife and install a band saw in my kitchen, right?

If you do this, then microwave the corn for like 20 seconds on high before peeling it, the silks come away easier. Not sure on the exact time, but you want just enough to heat them silks without actually cooking the corn at all. I’ve heard 10 and 30. So I split the difference. Seems to work pretty well, but I’ve not tried it often enough to tell you if it really makes a difference. The major down side seems to be you lose the convenience of the corn handle. So I’ve mostly done this when I’m removing the kernels, you get a nice stable surface stand up the cob while cutting them off.

Exactly what I came here to say.

This is one of those instances where a microwave oven really is the best tool for the job.

Dude, get some corn holders. it will change your life. 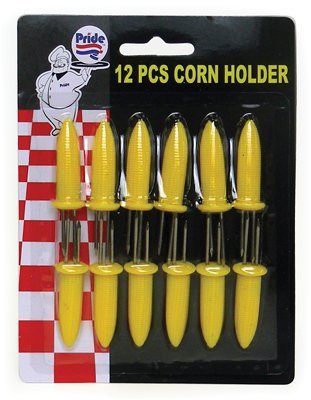 Beat me too it. Do people not use these kind of things anymore? I mean, I’ve known of these kinds of things since I was a kid.

Corn is best eaten hot off handles that stop you from burning your hands ;).

Dude needs to sharpen his blade. There’s no way he should have to work that hard to cut through the cob, especially with that type of knife.

No six 10 year olds is the best tool for the job.

Dude, get some corn holders. it will change your life.

I have some and absolutely hate them. Clutter up my drawers and don’t get used often enough (and I live in an area that’s known for growing sweet corn, we eat it nearly daily in season). When I do use them I never seem to have enough of them. They’re too short, they break, they rust, they’re tricky to clean, and they don’t hold corn very well. I’ll stick to bare fingers and natures handle when I can. Or stick a fork in the ends if I really want some extra purchase (we only really do this for kids when the stalk end breaks off). The forks hold in better (four thick tines) and give a longer handle.

That’s really how I gauge whether I need something in the kitchen or not. If I have it but still avoid using it, or reach for a more general tool instead I need to get rid of it. Tried to sell the corn holders at a yard sale, no takers even at $.50 for the whole batch.

Tried to sell the corn holders at a yard sale, no takers even at $.50 for the whole batch.

You can buy them new at a discount place for that.

Should have put up a sign that said “free to a good home”.

I think you need to shop around a bit. It’s true that the modern ones are a little cheap and tend to rust.

My granddad always has a set of porcelain ones that work really well.

These interlocking ones I see look pretty interesting.

I always enjoyed the stalk handle as well, but it does break even when you try to preserve it and it gets just as hot as the rest of the cob, So in those idea occasions when you can shuck cook and eat in less than ten minutes its a real liability. Once I started this method of shucking the corn I pretty much gave up on the stalk and went all holder.

There was about 4 dozen of them. A mish-mash of incomplete sets. I believe we sent them to the recycling center. Everyone around here seems to have a few, but noone seems to use or like them. Though they seem to sell plenty at the “country” stores, souvenirs shops and farm stands. Lot of tourists making day trips to pick up corn in the summer time.

I am glad that Mark bucked the trend of other sites, where this headline would be “You’ve been husking corn wrong.”

What is this WITCHCRAFT?

You have to repost this in July or August! Actual corn season when it would be more useful!

You can also fully cook the corn in the husk in the microwave. Leave it in at full-ish power for 4 minutes per ear (e.g 8 min for 2, 12 min for 3), then cut and de-husk it as shown.

Thanks, but I’d rather keep the handle. Kids don’t keep themselves off my lawn.

This proves God exists because why else would this be possible? Clearly corn was designed for US.

Who says it’s a dude?

Who says the person is working ‘that hard’, as opposed to just moving the knife back and forth and letting it do the work?

Perhaps they have arthritis?

I realize you are kidding, but it was generations of pre-historic Mexicans who designed corn. God had very little to do with it.