A cheap bread lame that should work just fine

A tool to score your bread is lame, you know

What advantage does this device have over a simple kitchen knife?

the razor blades are super sharp and disposable compared to my not always super sharp paring knife?

How sharp does a knife need to be to cut raw bread dough?

very. bread dough is sticky and clings. you gotta slice fast and confident.

They’re very sharp and very thin. The curved blade prevents the cut from pinching or smearing in a way that seals the cut. All of which maximizes the rise from oven spring, and makes sure the loaf rises evenly.

Its one of those things that isn’t necessary, but will produce a noticeable improvement, however slight. So why not if its cheap.

I guess you make a much wetter loaf than I do.

I swapped the photo so you can see it assembled.

That actually makes it a lot more interesting, since it now offers something a regular knife doesn’t. I’m not sure I’m sold on the bend making that much difference, but at least it has a reason to exist now.

Notice that its bent laterally. The cutting edge is straight, but the entire blade is bent into a curve.

Would a razor blade work?

America’s Test Kitchen tested several lames, and picked the Breadtopia one as their winner. It’s only a couple dollars more than the one in the article ($9-10).

I have one, and it works very nicely. My only other personal point of comparison is a razor blade on a bamboo chopstick or skewer, but if you’re going to buy a lame I would suggest going with ATK’s pick since they are pretty rigorous about testing and I find their picks to be reliable.

Plus, the handle looks like a baguette. So you have inspiration in your hands while you score your loaf. 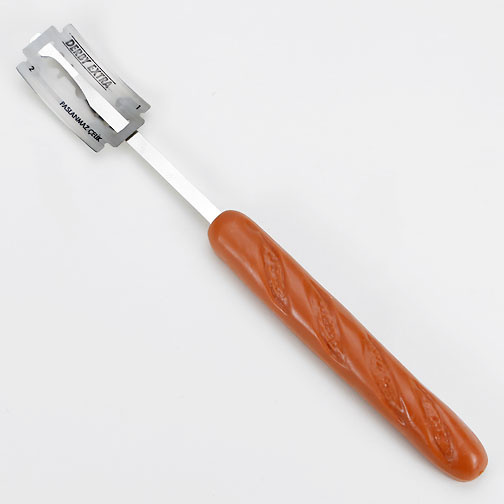 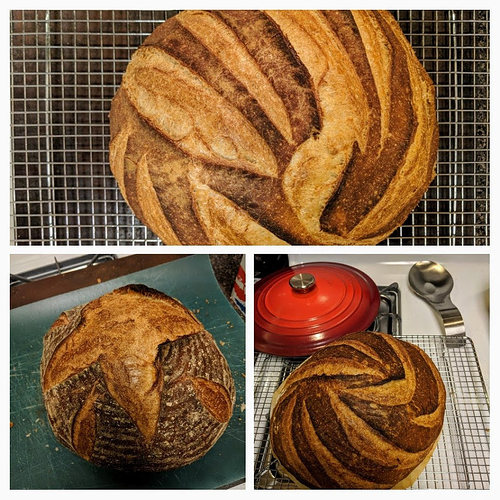 Ah, so that’s why it probably works better than the utility knife I’ve been using. I might have to spring for one of these. Either that or thread a razor blade onto a chopstick which I saw someone do and which appeals to me because I’m a cheap-ass at heart.

A regular kitchen knife does pull and drag the dough a bit, but a very sharp serrated knife works perfectly in my experience.

While I can’t say I’ve compared it with the results from a lame, I bake quite a bit, making a wide variety of bread types, and my Wusthof sandwich knife seems to work perfectly for scoring loaves.

As the bearer of a chipmunk scout merit badge for etymology, i’m going to go out on a limb and posit that this is the correct origin of this unexpected use of 'lame’ness:

(does this then mean one should properly pronounce that with two syllables: “cheap bread lam–may”??)

Probably “la mei” is how it should be pronounced. Like the first half of laminate.

An exception to the strong vowel - consonant - silent E rule that shows up everywhere in English.

I just use a really sharp knife - the trick to keep it from dragging into the dough and degassing it too much as you cut is to run the blade through some flour first (just sweep it through) and that keeps it from sticking - and you can then make deeper cuts if so inclined.

When i very occasionally make bread (cause im bad at everything but soda bread), I use a utility knife blade. Cut cleaner and more consistently than a knife. But not quite as well as the lames I’ve played with. Most of them seem to use standard DE razor blades these days. So all that would lack is the curve and the nice handle.

But when you get right down to it even scissors will work. Its all just shades of cleaner and more consistent cuts.