A DIY Kamado grill made of flower pots

Originally published at: A DIY Kamado grill made of flower pots | Boing Boing

Wow, he put a whole lot of effort into the dimples. I can’t believe these sell for $2,400 (according to the price tag in the vid). Are the real ones significantly more elaborate?

The holy grail/‘burn the house down’ project closer to my nerdy cohort is The backyard pizza oven. And lo’ a google search for “flower pot pizza ovens” does indeed result in about 4.5million hits. hmmmm… [drops cement trowel]

Our durable cast-aluminium DōJoe transforms your Kamado Joe grill into a best-in-class pizza oven. The distinctive wedge shape of the DōJoe makes maintaining steady temperatures ranging from 400°F to 700°F effortless, while also allowing grillers to... 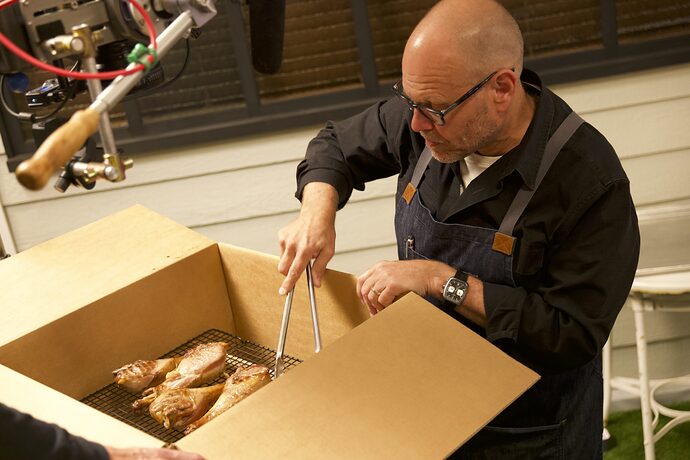 Alton Brown shares how to build his homemade cardboard box smoker: A tried-and-true method for smoking fish, poultry and even sauce at home.

Outstanding Dad’ing there, and the project was great too. I’ve had 3 solid months of cooking Hibachi on our outdoor shed cast iron fireplace. If I had one critique it would be the heat is vastly higher than I had expected, just needs some more tweaking with types of hard woods.

Kind of impressed that all that drilling went down without any cracking of the pots. Terracotta must be more forgiving than I thought. I assume he used masonry bits.

But this gentleman absolutely nailed the execution with the metal hardware.

I think that price is in non-freedom units. The price on the tag is 2.399,00 where the decimal and comma are switch compared to good old yankee freedom dollars.

I expect the steel bands to help a bit there too.

I expect the steel bands to help a bit there too.

I doubt it - there were a number of holes drilled through the pots long before any metal bands were added.

If anyone is looking at flowerpot projects on YouTube, steer clear of most of the flowerpot-candle heater ones. Every few years, there’s a rash of videos copying each other and they rarely include the cautions that those heaters can become a slow firebomb if people aren’t careful.

tl;dr: with too many candles, and the pots too close, eventually the heat radiating from the pots will melt the candles (bad), and vaporize the wax (very bad).

Regarding the inner and outer pots, wouldnt the space between need to be packed with an insulative material to stop fuel and meats falling into the gap?

With all of his tools and skills, he needs to build himself a workbench.

I was curious about how comparable this project was to an original Kamodo, so I found an exploded diagram of the parts. It looks like thinner pot is meant to be removed for clean out and loose-fitting for draft. Even if something did fall, it would be cleaned out with the cinders.

It also made me think that he could probably have a closer replica by using a pot similar to the lid for the firebox and some fire brick for the base. I imagine the straight-walled pot he used would waste a decent amount of coal in the bottom. It’s hard to tell from the video how low it sits inside the larger pot, though. 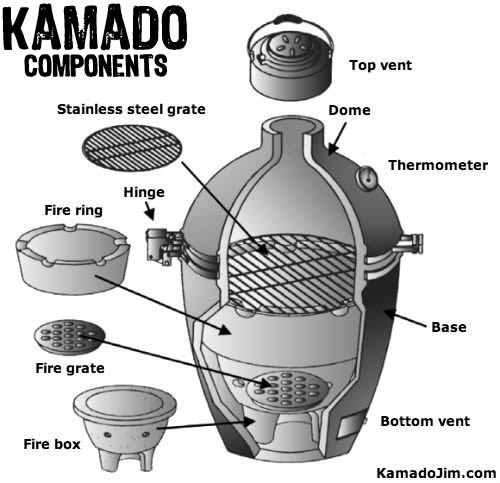 The regular kamados are made of thick walled ceramic, rather than thin tera cotta.

And they top out over 300lbs/136kg. The side walls are around an inch thick.

$2400 isn’t exactly an accurate price either. You can certainly spend that much. But the regular, round, 18" kamados from brands like BGE and Kamado Joe are about $1200. The size he built (looks around 16" or less) seem to be $500-$700. Both brands are considered on the spendy side, and there are double walled steel ones that tend to be cheaper than ceramic. Including budget ones around $300.

Terra cotta cookers of various sorts are common DIY budget projects, and it works surprisingly well. But anything bigger than a small table top set up tends to rapidly exceed the cost of a Weber Kettle that’ll work better. And they don’t tend to hold up well. Flower pots are very prone to cracking when heated up. I know one guy who kept a small Alton Brown style flower pot smoker going for 5 years, but he was down right religious about keeping it away from rain, cleaning it out and packing it away. I’ve slapped one together once or twice in a pinch. They never seem to last more than one or two uses for me, but that is probably because I’m using used flower pots that are just around.

It’s a fun project but it isn’t really a practical choice as a main thing.

Kind of impressed that all that drilling went down without any cracking of the pots.

I dunno. I think I saw a crack in the top. By the hinge. Not at one of the drill holes, but between them. Can be seen between 4:48 and 5:02 of the vid—unless I’m misapprehending it? 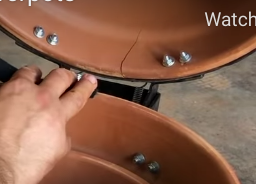 If it is a crack, I would guess that it wasn’t there when he bought the pot, or he would have chosen a different one to buy?

And they don’t tend to hold up well. Flower pots are very prone to cracking when heated up.

A friend made a flowerpot smoker a few years back, and he loved it. Much simpler, though—I think he just stacked the parts together and set the lid on top. But I know that at least one of the pots broke in use, and he had to replace it.

I should ask him if he still uses it. I know that he really liked to smoke shiitake mushrooms, said they tasted just like bacon (ummmmm, umami!)

A kamado style cooker was my “finished the house restoration project” present to me. I went with Kamado Joe because of the nicer hinge, nicer chimney, and price package coming together about 20% less than a similar BGE. I also really wanted the pizza insert and got it thrown in as part of the purchase during a holiday special.

They now make a steel exterior, ceramic firebox combo unit for around $800 that looks to me like it would be perfect for where I live. I do not regret the all-ceramic unit, however, I think many of the benefits are lost in a place that is 68-78F 330 days a year. I think it is mostly around fuel efficiency and probably how easy/hard it is to manage a heatsoaked pit.

If I screw up on the heating part of my ceramic cooker and overheat it, it takes a while to manage it back down into smoking temps. A steel one should not have that issue. However, once I get my running temp stable for 20 minutes, it is stable for 12-14 hours.

My WSM requires a lot more dicking with and maybe adding fuel. It doesn’t soak up the heat like the eggs do.

I think the smaller flowerpot firebox is pretty standard. Idea is that heat rises in these things and you really soak the lid and ceramic next to the fire in the box – but the lower portion of my cooker is ambient temps when the top is at 225-250F – unless I go put my hand next to where the fire is burning in the box. I find that my kamado burns towards the back, so I start my fire in the back, forcing it to migrate forwards towards the source of air as it moves into the fuel. Seems to burn very stable and consistent.

Kamados range easily from 175-1000F, in my use – so its far more versatile than an offset smoker or stand-alone pizza oven – but you have to remember the differences. Cooking with heat and smoke from below is not the same as from a source 20" away and off to the side. The size of the pit is smaller and you need to think about airflow and temps to keep air moving. Anything you want to get really smokey flavor, 250-275F is far better than 210-225F, because the amount of fuel burning to sustain the heatsoaked ceramic is so low you don’t get smoke.

Maybe the terracotta might respond less unpredictably re cracking when heated if it is soaked in water first? Terracotta can hold a fair amount of water but does dry out quickly.

Terracotta must be more forgiving than I thought. I assume he used masonry bits.

He did not, nor is that a hammer drill. The flower pots appear to be quite soft. Much softer than a typical fired ceramic, I guess. They appeared to drill pretty easily.

he needs to build himself a workbench.

Curiously, he seems to have one- he showed it at one point. Not sure why he did everything on the floor.

The part that struck me is that he appeared to use regular (not barbecue) paint on everything, and the weatherstripping is certainly not going to handle those temperatures either. Still, it worked at least once apparently, so maybe just the thing for a zombie apocalypse.