“Thinking outside the box” refers to a casket.

Not according to Wikipedia, which is infallible:

The notion of something outside a perceived "box" is related to a traditional topographical puzzle called the nine dots puzzle. The origins of the phrase "thinking outside the box" are obscure; but it was popularized in part because of a nine-dot puzzle, which John Adair claims to have introduced in 1969. Management consultant Mike Vance has claimed that the use of the nine-dot puzzle in consultancy circles stems from the corporate culture of the Walt Disney Company, where the puzzle was used in...

Why shouldn’t we make fun of people who murdered children and murdered a Congressman and several journalists who were investigating the welfare of those children? It’s not ridiculing the people who drank it against their will.

What they don’t know can’t hurt them. 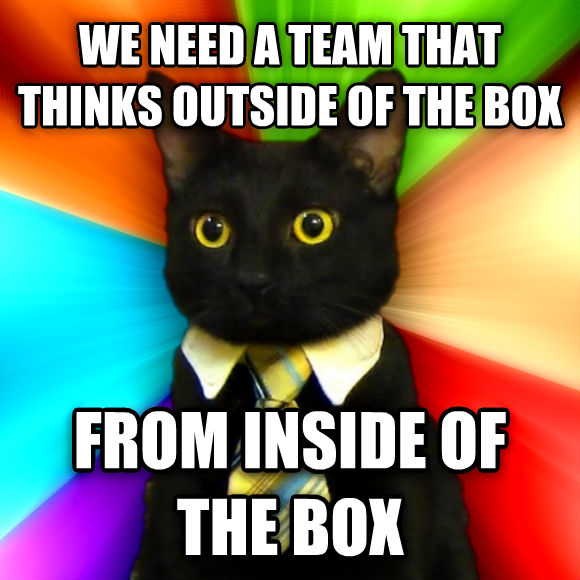 When I was little I thought if we had the right kind of pitcher, the Kool-Aid man would

When I was little, I avoided drinking Kool-Aid and would nervously look at the walls whenever someone else did. Even as a child, the thought of all that property damage freaked me out. Did we ever see Kool-Aid followed by a repair crew? No. Who would get blamed if something got broken in the house when our parents were out of the room? We kids would.

Funny 'cause I still have the vivid memory of me at around age 8 or so making a pitcher of the rare and highly coveted grape Kool-Aid - stirring the sugar into the glass pitcher, picking up said pitcher, then being shocked into paralysis as the bottom of the glass pitcher suddenly falls out and the entire 2 quarts of purple contents splashes onto the light colored carpet below.

Needless to say we only got lemonade flavor from then on.

You reminded me of the time my brothers tried to convince me that I could use water with chocolate milk mix. I almost broke the glass trying to stir it so that they would stop separating. Baby’s first suspension…

Heaven’s Gate may be a better reference here.

I thought it was Flavor-Aid, too, but from what I read later, it was a couple different brands, possibly incliding Kool-Aid.

(also, they were forced to drink this at gunpoint, so it’s not like they were tricked into it–they knew full well that they were being asked to commit suicide)

Well, that’s why we have the extra “Kool-Aid Man” premium in our insurance policy.

Smart move. Harder to confuse lemonade and paint water like it is with the darker colored stuff.

(also, they were forced to drink this at gunpoint, so it’s not like they were tricked into it–they knew full well that they were being asked to commit suicide)

One of the sick things I learned about this cult is that Jones had a history of making his followers conduct a range of “loyalty” tests that included drinking punch that he claimed was poisoned or asking them to put a gun to their head without knowing if it was really loaded. He was such a psychological manipulator that it got to the point where people honestly had no idea what to believe was true and simply committed themselves to obedience for a lack of obvious alternatives.

According to accounts from survivors at least some people who drank the punch thought this was likely another such test/practice run, at least until everyone started keeling over from the effects of the poison.

I think I knew that, but forgot it. At any rate, as you say, there wasn’t any doubt once the first few people started dying right in front of them.

I have a joke here about Jonestown, but it’s got a really long punchline.

I have a joke here about Jonestown, but it’s got a really long punchline.

See now, unlike the “drinking the kool-aid” metaphor, that’s making fun of group suicide. Because, you know, it’s actually trying to make someone laugh rather than just using a short cut to reference a concept.

What the hell happened to that pitcher? Glass-cutting elves?

Hey, how about a nice Hawaiian Punch?

Wait, like the nesquik powder? It’s not water soluble? I’m pretty sure it is. Plain cocoa on the other hand, yeah that stuff won’t mix with cold water. Not easily anyway. That must be what you’re thinking of right?

Good point. Until then, I’d only seen Nesquik mixed with cold milk, and cocoa in boiling water or hot milk. Gah, on top of everything else they probably gave me cocoa powder and told me it was Nesquik.

To prepare for their next visit, I plan to fill empty bottles of Blue Moon and Corona with Rolling Rock before offering them a couple of nice cold beers…