A message to Breitbart from Weather.com

Burns like that are just going to heat up the earth further.

Note to @BreitbartNews: Earth Is Not Cooling, Climate Change Is Real and Stop Using Our Video to Mislead Americans wxch.nl/2gzJpQG https://t.co/ypSMJ4eML6 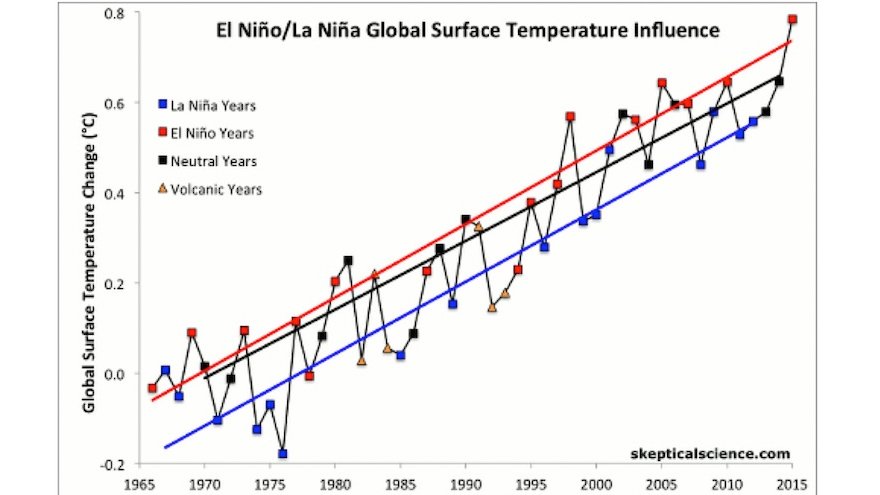 A message to Breitbart:

I hope shit like this winds up changing some people’s opinions, but I doubt it. Last week, just out of curiosity, I downloaded a Breitbart.com podcast episode on the Global Warming Hoax. I listened to the entire episode, even though it was difficult to stop my brain exploding from all of the half truths and outright falsehoods.

The episode could be very effective for people:

I don’t recommend that you actually listen to the episode. The foundational belief is that climatologists can’t be trusted for many reasons (they want to get rich, be famous, save the world, etc) and that the leaked Cimategate emails in 2010 are proof of this (even though 8 commissioned reports have exonerated all of those involved).

So, here is some plucky geologist and engineer who is able to see flaws in temperature data that other scientists are either to corrupt or inept to see themselves.

You can’t combat that with more and better facts, folks.

And you have people like Rush Limbaugh telling people not to believing anything – that he himself has to be able to derive the truth. Not easy to do – imagine having to live your life not believing anything unless you prove it yourself. Doctor visits must be fun.

Glad to see that no punches were pulled. I understand that Weather.com and Kait Parker stake their business on their reputation, but it would have been easy for them to deliver a low-key or milquetoast rebuttal, or avoid responding altogether.

Co-worker 1: You’re soaking wet! Didn’t you see on the Weather Channel that it was going to rain today?

Co-worker 2: What?!? Watch that leftist mainstream media propaganda? No thanks!

A message to Breitbart:

The most likely reply from Breitbart…

Whoa, mama! We’ll be waiting!
It’s getting hotter? Get your top off!

I think the word you are looking for is “valueless”.

Not easy to do – imagine having to live your life not believing anything unless you prove it yourself.

I wouldn’t get much done since I’d be busy re-deriving fluid mechanics so that I could flush my toilet (you can’t trust those Leftist Plumbers to actually do a real job).

This is important, but no one who receives / re-publishes that message cares about reality. That’s not the intent.

“Is there any evidence you would see that could change your mind? No? Then this isn’t really a conversation, is it?”

I hope shit like this winds up changing some people’s opinions, but I doubt it.

I think the issue we are seeing manifest lately isn’t one of “opinions” per se. The people who are writing and promulgating this rubbish are not intellectually motivated, nor are they concerned with classic fact-checking or valid, documented references. These people are motivated and driven to speak by raw emotion. They have merely learned to mimic the language of journalistic discourse to supply the “look and feel” of authentic and truthful reporting. Van Jones recent push to listen to and understand the concerns of this base is laudable, but in reality, “there is no there there”. I wish this weren’t the case, but if there was we would see some sort of solutions coming from the GOP; some manner of actual dialogue coming from the right and some actual sense of dignity in democracy in their language. Unfortunately, I have yet to hear anything other than raw, insensible rage.

We should move all the climate change deniers to an island and tell them “If climate change isn’t real, then you have nothing to worry about”. Just leave them there and come back in a few years.

This actually brings up something that I think cuts to the heart of the matter and I’d be interested to hear the bb community’s take on it.

I was thinking this morning about my childrens’ education and wondering if they are teaching what used to be called “library sciences” in primary school. These skills being; use of Dewey decimal (or the modern equivalent lookup language), validation of facts with multiple sources, notating those sources, and a general sense of skeptical interpretation taking into account inevitable journalistic bias and the reader’s own prejudices.

Knowing that education quality has always been disparate mainly based on location and economic class and that information access is generally more democratized than ever, I have never bought into the arguments that Americans are being deprived of a decent education (comparable to our past, anyhow) or that biased education has a way of directly indoctrinating those who would otherwise be free thinkers. I grew up in a highly conservative and moralistic environment both socially and educationally, but I was able to apply these critical thinking skills to my life and, without acting out of rebellion, formulate a viewpoint that is vastly different from the one I was imparted with. I can’t help but think that this is possibly the biggest social deficit we face today. One that can be laid directly at the feet of education and the erosion of educational standards that go beyond quantifiable rhetoric.

Many years ago my father informed me that he’d heard there was no evidence for global warming. I said, “Good. That means we have time to reduce pollution and look for alternative means of producing energy before the damage we’re doing does have a noticeable impact.”

He got very quiet and changed the subject. At the time I thought of that as a small victory but I realize now it was simply an example of a bigger problem. Nothing was going to change his mind.

She had me at “Let’s make the facts louder than the opinions.”

Winner winner chicken dinner, and Amen to that!!

Nothing was going to change his mind

I’m a little more optimistic in this regard and although I don’t know your Paw, I have a feeling that if it appeared to him that his entire peer group had all changed their minds on the subject and (more importantly) were all behaving as if they had never really held those views in the first place, he would change his mind.

See, we will would have had been mistaking their scepticism for dangerously untrue beliefs. Which they never held.