A succinct, simple, excellent description of the problems of neoliberalism and their solution

I know calling it neo-liberalism is academically correct, but most folks do not have a grasp of it. Calling Reagan a neo-liberal sounds like an oxymoron even though it is true. (It is like trying to explain Nixon was a good deal left of Obama.)

Nor does abandoning neo-liberalism as economic policy necessarily mean abandoning cultural aspects where opportunities for multiculturalism, and individual identity, have been greatly expanded in the past two decades. There is a third path,

Of course you’re right. The thing is to give it a positive name, not “anti-” anything. Especially not anti-neo-anything, this will only confuse normal people who aren’t politics junkies. Call it sunshine-ism or something. Who doesn’t love sunshine?

Perhaps the takeover of the democratic party by neo-liberals might explain why Democrats are in the minority in the Senate, House, and Judiciary, and at historically low levels of state governorship and legislatures.

The party’s recent history of shitting on poor people and then asking for their vote might also have something to do with it.

Perhaps the takeover of the democratic party by neo-liberals might explain why Democrats are in the minority in the Senate, House, and Judiciary, and at historically low levels of state governorship and legislatures.

Over the past few decades in rust belt western PA I witnessed an entire generation of incomptent baby boomer democrats who inherited established power mainly through the historic union alliances.

As time progressed, neoliberalism alienated that working class base from the party. As talk radio primed voters against “the establishment” and minorities, republicans were able to execute a ground game that stripped all chances at an opposition to form similar to what the dems did when they were in control from the 50s through 90s.

It’s been a strange thing to witness. In less than two decades we’ve gone from “nothing but a democrat ever wins here” to “no hope for democrats in the next 15-20 years”.

I am sympathetic to the old unions and democrats, but in this part of the country they were a bloated dinosaur running on fumes. For over half a century these democrats promised economic renewal while the national party cut deals that made such renewal impossible. In turn, the national party were too callused and down right idiotic to even bother worrying about what was going on. They took it for granted, at their peril.

It all culminated in Barack Obama, the great community organizer president, leading the democratic party to its most humiliating and crushing defeat in recent memory. All marketing and no substance with no ability to translate beyond one human personality (possibly two, if Michele had run).

How about calling neoliberals “Bad Samaritans” as HJ Chang titled his recent work. That might resonate with the midwestern, Christian, working poor.

I can’t recommend that book highly enough. It’s extraordinarily lucid for a book on economics, and it’s full of evidence that can be explained in simple terms without condescension.

Call it sunshine-ism or something. Who doesn’t love sunshine?

Trudeau’s campaign that won him the Prime Minister’s position in Canada, and his behaviour since, are called “sunny ways.” His election included a promise to run a deficit.

Now, I’m not thrilled with him*, but I had been thinking for about 5 years that all someone had to do to win was show up and tell everyone the government was going to do a good job and things were going to get better. Then he came along and did it and it worked.

It can’t be overlooked how the moderate republican was killed off in the past decade or so.

With the right taken over by crazies going against neoliberalism while embracing portions in the shadows, democrats are now forced to potentially renounce their own. Something alt-right windbags love. The great battle inside the democrat party is who it will nominate for president 2020. If the left fails to nominate a neoliberal and goes Bernie or Warren style, we might see a 3rd party billionaire candidate run to represent the neoliberal agenda (Bloomberg said he would do it if Bernie won the nomination). With record numbers of U.S. voters registered as independents, the 3rd party gimmick make be a marketing strategy neoliberalism can slide back into power on. It would give the appearance of a fresh start away from the two party system, but would be the same old bullshit.

And if the neoliberal wins the future of the democrats is…

Yeah, this isn’t going to help: 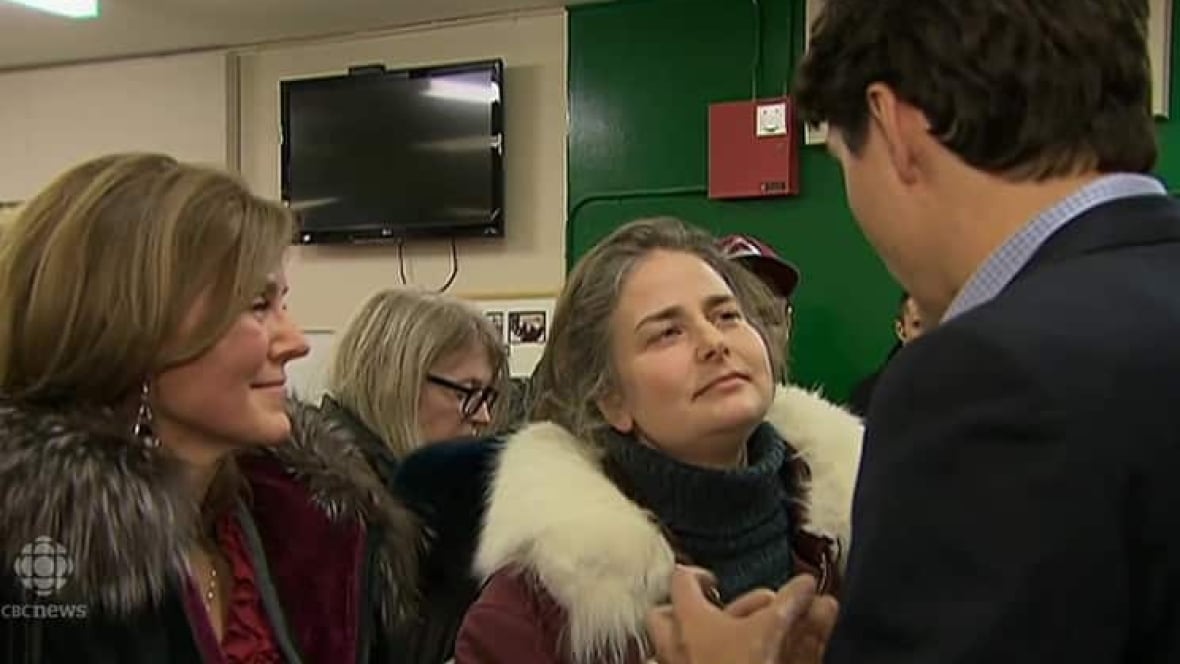 'Do you think Kellie Leitch should have her own party?' Trudeau asks electoral...

Prime Minister Justin Trudeau says while in Iqaluit that one of the reasons he killed his election reform promise was to prevent politicians with extreme views from gaining a foothold in Parliament.

Yes, I think that Kellie Leitch should have her own party. We used to have two right-wing parties: the sane PCs, and the frothing-at-the-mouth Reform party. The two merged, and which group got into power? That’s right, the mouth-frothers.

Is PR going to bring voices saying things that I don’t like into Parliament? Sure it will. But under the current rules, Kellie Leitch might soon, indeed, have her own party, and it’ll be one that she can win a majority government with.

When they discuss the likelihood of a shrinking economy, I begin to wonder if one could calculate the theoretical maximum size of the global economy. I’ve heard people talk about a maximum carrying capacity of the planet, in terms of number of humans, but not a limit to how much time in each person’s day would be consumed with exchanging symbols of wealth. It’s the sort of thing I imagine Ralph Munroe might tackle.

It all culminated in Barack Obama, the great community organizer president, leading the democratic party to its most humiliating and crushing defeat in recent memory. All marketing and no substance with no ability to translate beyond one human personality (possibly two, if Michele had run).

Strictly my opinion here, but I think the economic situation Obama inherited from the Neo-Cons (Which was actually Neo-Liberailism 1.1) tied his hands a bit. There simply was not enough wealth left to cushion the blow, so he bailed out the elite, and focused on the cultural aspects of NL-ism. So some good things happened IMO… We started looking at why we shoot black people; we gave LBGT folks a legitimate voice; started to acknowledge we imported brown people to do the shit work; All of which is great if you happen to be one of the groups that benefited, but it left a three generations of crackers in the cold… (Fascists enter stage right… errrr… alt right)

Gross world product divided by global population calculates to around 16k usd per person. Imagining what the world looks like if it was more equitably distributed is an interesting mind exercise. Makes for interesting conversation because people are forced to think about giving up things for the benefit of others. Also is a stark reminder of the resource war we all are apart of but don’t want to admit.

Digestible, interesting, and a strong recommend for anyone who’s taking a short flight: 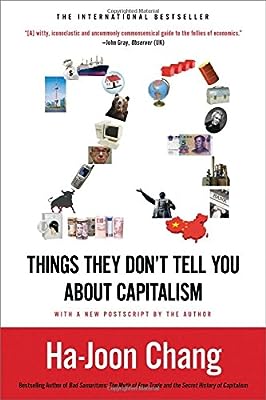 The acclaimed Ha-Joon Chang is a voice of sanity-and wit-in this lighthearted book with a serious purpose: to question the assumptions behind the dogma and sheer hype that the dominant school of neoli ...

I know calling it neo-liberalism is academically correct, but most folks do not have a grasp of it.

Even if we were to use a more inuitive term for the economic philosophy, the less educated people who need to grasp it most have spent the past 30 years proving themselves fundamentally incapable of understanding how it works against their own interests. Even when they rebel, they just turn to a different form of aspirational worship of the ultra-wealthy and corporate bosses (with the usual dash of bigotry). These are people who have lost their jobs, their homes, their health care and more, and yet they still vote like they’re “temporarily embarrassed millionaires.”

The establishment Dems and Third-Way Labour have certainly failed to provide them with an alternative during those same years, embracing their own water-down version of neoliberalism, but the blame can’t be placed entirely on them for the mindset of the GOP base.

but it left a three generations of crackers in the cold

Good thoughts. Although I would add the media attention to the issues you discussed without any practical consideration for the “crackers in the cold” potentially makes things worse for everyone. The Trump supporters I know, most who arn’t alt-right, just exacerbated democrats and moderate republicans who thought both choices were evil, are scarred by the physical decline of small town america within their lifetime. It’s not nearly as bad as what happened to minority communities the past century, but everything happens in its own bubble.

So the former communal districts of commerce decay. Movie houses and stores closed. All to be replaced by big box stores and the internet. Hoarders buy up the cheap real estate and fill up old buildings with junk. A half century of political empty promises to bring it all back, coupled with endless parading of movies and tv shows romanticizing those times, make it a tough to swallow the new economic world order.

Then, during the Obama years, U.S. homes begin to see a multitude of advertisements and television shows displaying a country of endless prosperity and diversity. Black people walk out of southern California mansions and hop into 60k cars. Feminist deodorant commercials taking on the pay gap. An apple commercial that channels Maya Angelou. These images are shallow and display a sanitized reality. The marketers don’t care, they are cashing in on the attitudes of the young who they are always desperate to please. Commercial TV, and increasingly streaming content, isn’t much better. The public is left adrift, trying to sort out poverty, privilege and the economic future in a sea of vapid imagery used to sell commodities and luxury goods.

and then we get your…

“The future has arrived, it’s just not evenly distributed”

Your wording here leads astray what I assume was your intended message: the LBGT community finally has a voice on a cultural not just political level. But let’s acknowledge that none of that was given to them; they and their supporters have been fighting for societal awareness, understanding, and acceptance (and failing that, tolerance) of LBGT people for decades.

ETA: I hope I don’t come across as picking on you. That’s not my intent and I liked your post (as in like-liked, not just ‘liked’). I guess I’ve just become hyperaware and hypersensitive to political language and figures of speech in the last several weeks.

But what about the pensions?