Looks like a tetanus shot just waiting to happen.

Maybe, but if you are, don’t sweat it: ACC’s got you covered.

Wheeee! My partner and I were in Oamaru a few weeks ago. The whole town is a bizarrely wonderful place. Two photosphere shots I took while there: Just inside Steampunk HQ and one at the Grainstore Gallery a block away from Steampunk HQ

Ha! Got that (and a whole spectrum of other shots) taken care of before we left on the trip. You never know …

Nice pics. I miss Oamaru. Did you drop in to the Criterion for a pie and a pint?

And it might be a bit late, but if you’re around the pretty bits of the South Island (which is all of it!), check out Puzzling World at Wanaka.

Thanks! Your site & adventures are inspiration for that future day when my wife and I are traveling with kids : ) It’s wonderful seeing people do something so many people worry they won’t be able to once they have a family > 2!

I have nothing to add except that I lived there for a single month when I was 17. Way back in the 20th century. We called the the ‘city of smells’. There seemed to be a new smell around every corner. Most were unpleasant. The stone buildings were great though. Needless to say there was no steampunk then but there was a man on a penny-farthing.

Unfortunately, we missed the Criterion. And we missed Whitestone Cheese, too. We had a fairly tight schedule (had to get to an organized tour in Twizel), so we didn’t spend as long in Oamaru as we would have liked. But both islands deserve a serious revisit, so making a note here about Puzzling World. Thanks!

I can imagine it being a little rundown back in the day. And as for smells, I heard one story that the penguins, while adorable, are pretty stinky, but we didn’t get close enough to experience that.

I’m going to be a bit of a pedant and point out that’s a zeppelin and not a blimp. the faceted appearance indicates the presence of an internal frame, which is the primary functional difference.

Thanks so much! I’m glad you’re following along. So far, the trip has been great for the kids. They’ve done so many things that they probably never would have otherwise experienced. It hasn’t always been easy, but we’re really glad we’re on this adventure.

You are absolutely correct. Thanks for pointing that out. I take full responsibility for the mistake and promise to correct it where I can and not make that mistake in future writing. 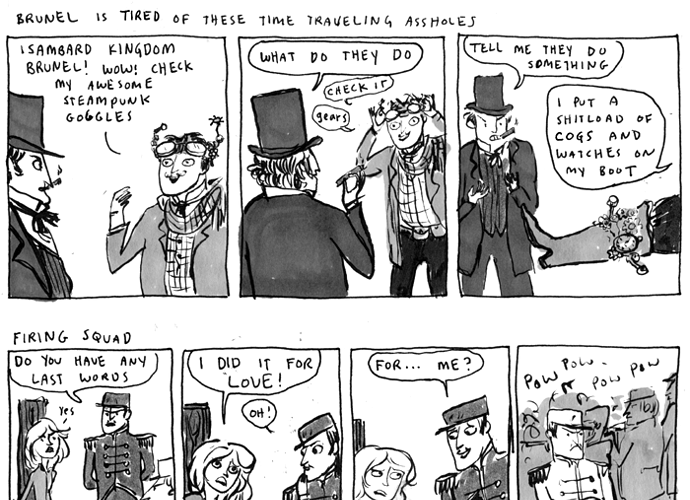 Glad you enjoyed your trip to Oamaru. It’s an interesting little town - we’re in Dunedin and take a trip up a couple times a year. The annual Victorian Heritage Celebrations are also pretty eccentric and great fun. This year’s fete is based on the theme Alice in Wonderland to celebrate the 150th anniversary of its publication apparently. We also enjoy lunching at Riverstone Kitchen, just north of Oamaru - they source all of their produce locally, and have a brilliant playground for kids.

I usually bite my tongue because I don’t want to spoil people’s fun but that first strip is exactly how I feel. Why am I supposed to get excited about something because someone has hot-glued watch gears to it?